Airplane contrails, also known as the ice clouds formed by airplane farts, could contribute substantially to climate change. This will be accentuated in the future as air travel ramps up. 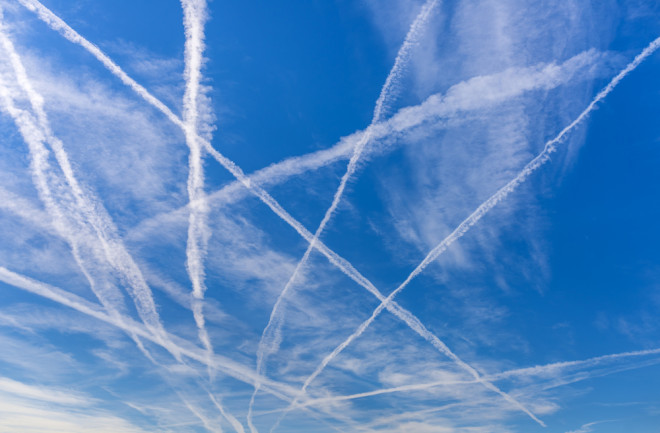 More than 40,000 airplanes crisscross the skies above the U.S. every day. The engines propelling the metal birds through the wild blue yonder leave behind distinct line-shaped clouds known as contrails. The wispy clouds form when water vapor from fuel combustion condenses and crystallizes into ice. The ice clouds trap heat in the Earth’s atmosphere and contribute substantially to climate change.

Now researchers find contrails’ impact on climate change will triple by 2050 thanks to increases in air traffic. The discovery suggests contrails are a factor that climate policies should take into account, according to the researchers.

“It is very important to consider and quantify the contribution of aviation, and in particular contrail[s] … to climate change and, in order to limit climate change, to evaluate mitigation options,” said climate scientist Lisa Bock of the German Aerospace Center, who authored the new research.

Aviation already has a sizable influence on the climate. In 2005, air traffic contributed about 5 percent of humans’ influence on climate change. Since then, that number has only gotten bigger: Air traffic roughly doubles every 15 years. And contrails are the aviation industry’s biggest climate influencer. They pack an even more powerful climate punch than CO2 emissions from planes. But policies to lower aviation’s influence on climate change focus on CO2 emissions, all but ignoring the impact of contrails.

Bock and colleagues estimated global contrail coverage for the year 2050 with an atmospheric model that distinguished them from natural clouds. Then the researchers applied the model to different emissions scenarios based on the Aviation Environmental Design Tool, an inventory of air traffic.

For example, some emissions models accounted for improvements to fuel efficiencies we might have in the future. Others put airplanes higher in the sky. But in general, the emissions scenarios included a big bump in air traffic: It’s estimated that by 2050 air traffic volume will have quadrupled compared to 2006.

The analysis revealed contrails’ contribution to climate change will increase three-fold. The usual suspects – major airline hubs in North America and Europe – will persist as significant players, the team reports Thursday in the journal Atmospheric Chemistry and Physics. But Asia is set to gain in importance as air traffic increases there in the future, Bock says.

“It is important to recognize the significant impact aviation, which includes contrails, [has] on climate and to take those effects into consideration,” Bock said. “Everyone should keep this in mind, for their own travel plans as well as for creating emission trading systems or [policy] agreements.”