After Tsunami, Japanese People Think Waves Are Less Dangerous. What? 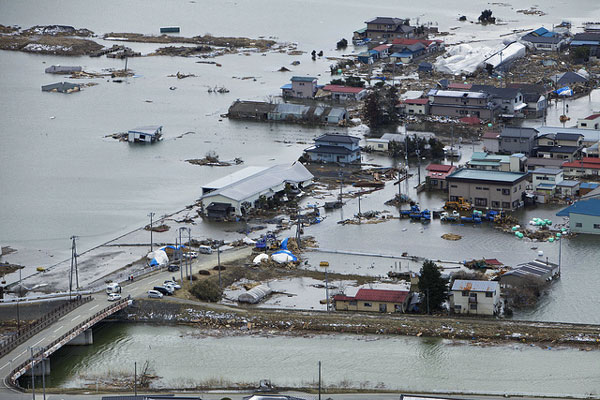 The wave that washed over the eastern coast of Japan was more than 130 feet high.

, which killed 15,000 people and caused about $210 billion in property damage, would have people feeling more apt to evacuate when another killer wave approaches. But, strikingly, scientists who interviewed Japanese people a year before the event and afterwards found that the size of the waves they would think dangerous enough to flee had grown. As Adam Mann writes at Wired

, people had stopped recognizing the height at which a wave becomes dangerous:

After the 2010 Chilean earthquake, almost exactly one year before the Tohoku disaster, Oki asked Japanese residents a set of questions related to tsunami preparedness. At the time, roughly 70 percent correctly identified that a 10-foot tsunami is a hazard and 60 percent said they would evacuate in the event of one that tall. Even 1.5 feet of swiftly moving water can carry a person off and drown them, and waves only 6.5 feet high can wash away or destroy wooden houses. But when the same questions were asked again one month after the Tohoku disaster, the numbers had nearly halved. Only 45 percent of respondents knew that a 10-foot tsunami was hazardous and only 31 percent said they would evacuate if they heard a warning that one was coming. People mostly misidentified a 16-foot tsunami as the point at which to evacuate.

The researchers, whose work was presented at the American Geophysical Union meeting this week, think that this effect may be due to what behavioral economists

. Anchoring is what happens when people rely too much on a particular detail while making decisions---for instance, in the classic example

, subjects asked what percentage of the United Nations was African countries gave lower percentages if the questioner first asked if it was "greater or less than 10%" and higher if if was "greater or less than 65%." The Tohoku tsunami was so large--about 130 feet--that it may have dragged people's expectations of what's dangerous higher. That's bad news for tsunami safety, so the researchers suggest some counter-anchoring: tell people in news reports that 6.5 foot waves can wash away houses, to make that the detail that sticks in their minds. [via Wired