After exploding on Friday, Hurricane Matthew has weakened a bit, but it still remains a ferocious Category 4 storm

Matthew defied the forecasts, intensifying with shocking speed. The storm now poses a threat to Jamaica, Haiti and Cuba. 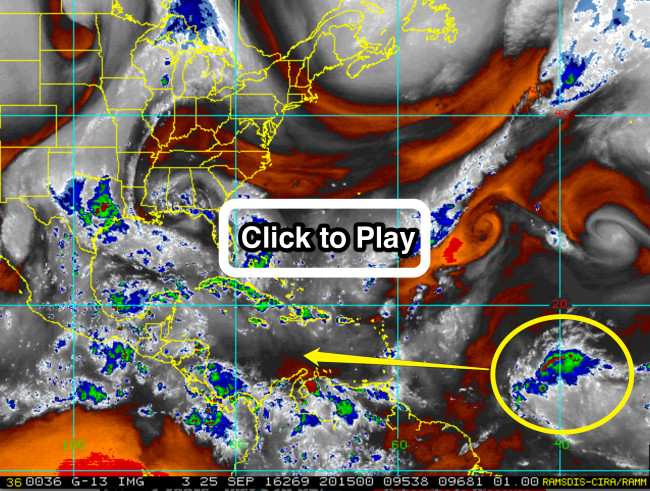 A screenshot of an animation of water vapor imagery showing the evolution of Hurricane Matthew between Sept. 25 and Oct. 1, 2016. Click to watch the animation on Youtube. The storm begins as a tropical wave — the circled area of clouds and thunderstorms — moving westward. At the end of the animation, the storm has intensified into a major hurricane. (Source: NOAA/RAMMB/CIRA) (Source: NOAA/RAMMB/CIRA) Hurricane Matthew will not soon be forgotten by meteorologists. Despite wind shear that should have hindered its development, the storm exploded to Category-5 strength on Friday. "Jaw dropping," was how meteorologist Bob Henson at Weather Underground described it. "Dissertations may be written on how this happened!" With maximum sustained winds on Friday of about 160 mph, Matthew became the first Category 5 storm in the Atlantic since 2007. It also now has the distinction of being the southernmost Category 5 hurricane on record.

An animation of GOES-East weather satellite images shows Hurricane Matthew swirling north of Venezuela and Colombia on Saturday, Oct. 1, 2016. (Source: Cooperative Institute for Meteorological Satellite Studies) Matthew settled down a bit this morning to Category 4 strength. As of 2 p.m. today (Saturday, Oct. 1), the storm had sustained winds of 140 miles per hour. The eye has shrunk and become less distinct, indicating that a phenomenon known as an eyewall replacement cycle may be underway.

The forecast now shows Matthew turning abruptly northward and approaching Jamaica on Monday morning. The mountainous terrain there is likely to erode the storm's strength. Beyond Jamaica, Matthew should head north toward Cuba and Haiti, and then on toward the Bahamas. After that, the forecast gets fuzzy. The National Hurricane Center map shows that Matthew most likely will miss Florida. But the average track error for a forecast five days in advance is 230 miles — and that means hurricane impacts can't be ruled out there. Will Matthew make landfall somewhere along the Eastern Seaboard north of Florida? It is much too soon to know. But even if the storm tracks offshore (the likeliest scenario based on what the models are saying now), coastal residents could still feel significant impacts from wind and storm surges. With that in mind, if you live along the coast in the eastern United States, you'll want to keep an eye on Hurricane Matthew.