After a miserable May with unusual warmth, Arctic sea ice hits a record low for early June. 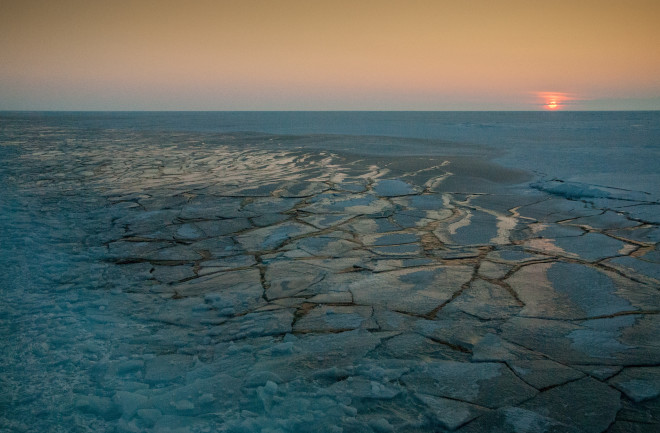 The sun sets over the Arctic sea ice pack, as observed in October of 2014. Sea ice helps maintain cold temperatures in the Arctic. (Credit: NASA/Alek Petty)

With Arctic temperatures running well above average in May, sea ice in the region continued its long-term decline, finishing with the second lowest extent for the month.

And since then, things have gotten worse.

Here’s another way to think about this: Sea ice has gone missing from an area exceeding the size of California, Nevada, Arizona and Oregon combined.

On June 10, 2019, the extent of Arctic sea ice reached a record low for the month. This graph shows the situation a day later, on June 11th. (Credit: National Snow and Ice Data Center)

In the chart above, the extent of Arctic sea ice during 2019 is depicted with the orange line. On the 10th of June, it dropped below the yellow line showing the trend for 2016, which previously held the record for lowest ice extent at this time of year.

It’s important to keep in mind that what we’re seeing right now does not predict where we’ll be at the end of the warm season in September. This is when Arctic sea ice reaches its lowest annual extent.

Will 2019 edge out 2016 for the distinction of having the second lowest extent on record? Or might it even beat out 2012, the current record holder?

Right now, the Climate Forecast System model is showing high pressure persisting over Greenland and into the central Arctic through August — a situation that would come with continued abnormal warmth in the region.

The result would likely be continuing losses of Arctic sea ice this summer. But we’ve got most of the warm season ahead of us, and other factors could result in a different outcome. (Keep reading for what weather models are showing for the next ten days.)

Whatever happens in the relatively short run, the long-term trend couldn’t be clearer, as the graph at right shows. With annual variations, it depicts a continuing trend of Arctic sea ice losses during the month of May from 1979 through this year.

Monthly May ice extent for 1979 to 2019 shows a decline of 2.74 percent per decade. (Credit: National Snow and Ice Data Center)

Thanks to human-caused climate change, the trend for every month of the year looks pretty much the same.

May’s very warm temperatures contributed to a dramatic and premature flushing of sea ice from the Arctic Ocean out into Baffin Bay to the south. It happened through the narrow Nares Strait separating Greenland from Canada.

You can watch it happen in the animation linked to the image at the top of this post. Click on the image to watch the animation. (It may take a moment for it to load — be patient, it’s worth the wait.)

The animation consists of images acquired by NASA’s Aqua satellite as ice was flushed out through the strait between April 19 and May 11. At the start, thick ice that ordinarily plugs the strait — a feature scientists call an “ice arch” — had broken up prematurely. The distintegration of the arch allows ice to flow from the Arctic Ocean (in the upper right quadrant of the frame) down into the strait.

Normally, the ice arch forms during late autumn and winter at the north end of Nares Strait and persists into June or July. But according to the NSIDC, this year:

Last year, the arch lasted well into June. You can see this in the animation, with mostly intact ice in mid-June of last year. (It remained intact for a few more weeks.) But this year, the ice arch was already breaking up in March, as the second satellite image shows.

Whether or not abnormal heat persists through the summer, it looks like the warmth will not relent in the near future. As the map above shows, for at least the next ten days the GFS weather model (which just got a major upgrade) is predicting warmer than average temperatures through most of the Arctic. Northern Canada, Greenland, and most of Siberia and Alaska are forecast to be especially warm.

I wouldn’t be surprised to see wildfire activity picking up in these areas. In fact, even with sea ice still crowding the shore of northern Siberia, I already see plumes of wildfire smoke in satellite imagery of the region. Check it out here.

We could be in for an interesting summer…