After a Decade of Declines, Amazon Deforestation Sharply Rises 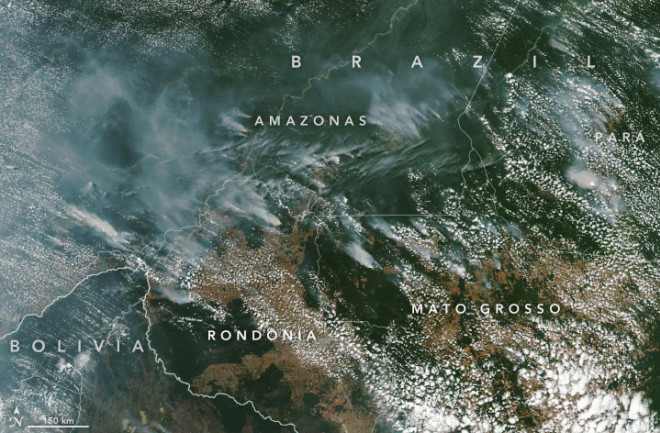 In a world that is quickly losing its tropical forests, Brazil was — until recently — the solitary bright spot. Deforestation rates actually declined there by more than three quarters from 2004 to 2011, winning the praises of the world. But in the past half a year, the trend has dramatically reversed, sparking new worries about the future of the world’s largest rainforest.

The pace of forest destruction soared in Brazil from August 2014 through February 2015, according to two different surveys of satellite images. One analysis by the Brazilian space agency INPE reports a 63 percent rise; the other, monthly tallies by the Amazon watchdog group IMAZON, shows deforestation tripling (up 215 percent) in Brazil over the same period a year earlier.

Phillip Fearnside, a forest expert with the Brazilian government’s Amazon research agency, INPA, says that he’s disappointed, but not surprised. He blames the surge in tree-cutting partly on new, less environmentally friendly government policies in Brazil, and partly on rising demand for beef in countries with a rapidly expanding middle class like China and Brazil itself. Most of the recent cutting in Brazil has been to clear land for cattle pasture along the southern and eastern fringes of the forest.

As the global economy continues to recover, pressure to cut the rainforest is expected to increase. But in the past, the Brazilian government succeeded in resisting those market pressures, says Fearnside, with some of the most progressive environmental regulations in the world

Brazil has the largest network of “protected areas” of any nation. Over 44 percent of the Amazon is in preserves where commercial activities are prohibited or highly restricted. There are also tough laws on the books that prohibit clear-cutting for lumber and deny agricultural credit to those who destroyed the forest illegally. There is also the much lauded soy moratorium, a partnership with agribusinesses that banned forest being cleared to plant soybeans.

In recent years, however, the government of president Dilma Rousseff has taken some giant steps backward, according to Fearnside. He cites the revised Forest Code, enacted in 2012, which, in addition to watering down critical environmental protections, offers an amnesty to individuals who engaged in deforestation.

“The expectation is that if you clear illegally now, sooner or later there will be another amnesty that will forgive your past crimes,” says Fearnside.

Rousseff’s government also has several large hydroelectric dams in the works, projects which in the past have brought large new populations of construction workers and support staff into the forest and increased deforestation in their wake. Most worrying of all says Fearnside is the proposed BR 319 Highway, which would link the Amazon’s biggest city, Manaus, in the center of the region, with the arc of deforestation in the south, where much of the forest has already been cleared.

“If the actors in the arc of deforestation — companies, individuals — move out of that region into the rest of the forest it changes everything,” says Fearnside. “Once you build a road like that a lot of what happens is no longer under the government’s control — side roads fan out from it, people move into the forest.”

If the surge in cutting continues, it’s bad news not just for the rainforest, but for the world. At a time when extinction rates are soaring, the Amazon rainforest remains the greatest intact trove of biodiversity on the planet. Preserving forests, which remove carbon from the atmosphere, is also crucial in the fight to limit climate change.

“I don’t like to look at the Amazon forest as something that could be gone in 30 or 40 years,” senior INPA researcher Rita Mesquita said in an interview with New Scientist. “But that may be where we are headed if we don’t change course.”