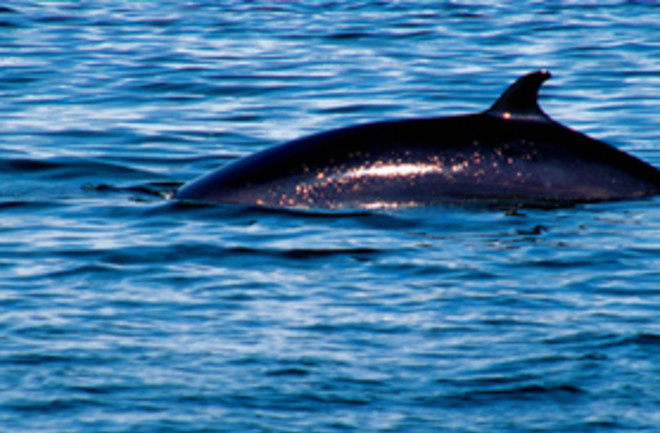 Environmentalists have been all over Japan’s “scientific” whaling for years, with some organizations saying the program is unnecessary or little more than commercial whale hunting in disguise. But now Japanese scientists have published new research in Popular Polar Biology, and their findings aren’t good: whales are getting skinnier, and global warming might be at fault.

The scientists measured the amount of blubber in minke whales captured since the 1980s and found that the level has dropped off precipitously since then. Why are they pointing the finger at global warming? Because krill, the tiny crustacean at the base of the food chain, have declined in Antarctic areas by 80 percent since the 1970s. Part of the problem is warming waters, but over-fishing for krill to use at fish farms and the ozone layer hole have contributed to the drop as well.

Intuitively, one might think that eating less and losing a little fat might make it easier for whales to survive in a warming world. But not so, the scientists say—the whales’ 9 percent loss of blubber has outpaced any rise in ocean temperature. And with less protection for the cold waters of the Antarctic, researchers say, the whales could have more trouble reproducing.

Despite the troubling finding, this study’s methods have garnered attention, too—the scientists studied more than 4,500 whales slaughtered in the last two-plus decades. The paper itself spells out how vicious whaling can be—many of the whales killed didn’t die instantly, and others couldn’t be studied because the harpoons or rifles had simply caused them too much damage. Two journals passed on the research before Polar Biology picked it up, perhaps because of the grisly manner in which the science was obtained.

Minke whales (understandably) don’t care to be approached by humans, so it’s hard to study their blubber level in any other way, says Lars Walloe, a Norwegian researcher who helped the Japanese team. But 4,500 whales is a lot to kill, even for a potentially important scientific finding. The U.S. State Department and others have said that slaughtering whales for science is unnecessary, so let’s just hope we figure out non-lethal ways to learn more about them.