The sites of large construction projects are often rich sources of fossils, especially in California, where they're protected by law. 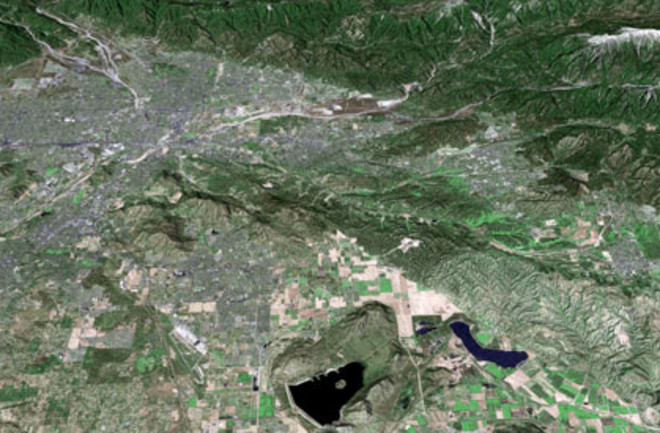 In the fall of 2009, bulldozers digging in preparation for construction of a new power station in arid San Timoteo Canyon southeast of Los Angeles unearthed some fossilized snails. Obscure provisions in California’s tough environmental laws require that scientists be dispatched to construction sites in geologically promising areas, so utility company Southern California Edison had a team of paleontologists standing by. As the researchers sifted through the soil, the magnitude of the find slowly became clear: The canyon revealed a trove of thousands of animal and plant fossils that were more than 1.4 million years old.

Remains of a nearly complete extinct horse that lived around 1.4 million years ago. | Southern California Edison

The fossils were quickly excavated, jacketed in plaster, and shipped to a nearby lab for ongoing cleaning and analysis so that construction could continue. Among the largest and most complete specimens in the new collection are a giant ancestor of the saber-toothed tiger, ground sloths the size of grizzly bears, two types of camel, and new deer and horse species. “It was extremely exciting to come across such a rare find,” says Philippe Lapin, one of the paleontologists with the Southern California Edison team. “The number of fossils was beyond our expectations,” he says. Thomas Demere, curator of the department of paleontology at the San Diego Natural History Museum, says that because these fossils are from an earlier epoch than most others found in the region, they will “help flesh out the tree of life here with what organisms existed, when they arrived, and how they evolved.”

If not for the strong California laws protecting paleontological resources at the site, the San Timoteo discoveries might never have happened. Most of us think of determined bone hunters digging up paleontological treasure on dedicated expeditions in exotic locales, but the fact is that many fossils turn up quite by chance.

Construction projects, which sift through tremendous amounts of dirt and rock while digging foundations or laying roads, are an especially rich source of these happy accidents. In 2009, for instance, builders erecting a seawall in Santa Cruz, California, uncovered three whales, two porpoises, and other marine life from 12 million to 15 million years ago, while a recent expansion of the Caldecott Tunnel near Berkeley, California, yielded extinct camels, rhinos, and giant wolverines. In 2006 construction for a parking garage for the Los Angeles County Museum of Art revealed a prehistoric lion skull, dire wolves, and a near-complete mammoth skeleton from the last Ice Age, roughly 40,000 to 100,000 years ago. And last October, a bulldozer operator working on a reservoir expansion project in Colorado found a juvenile mammoth.

Subsequent excavation in Colorado exposed at least eight mastodons, three more mammoths, extinct bison, and a 9-foot sloth; researchers hope to return to the site to continue digging this spring. “We find fossils about 85 percent of the time on construction sites,” says paleontologist Lanny Fisk, president of PaleoResource Consultants, an Auburn, California, outfit that specializes in preserving fossil remains. Fisk and other paleontologists estimate that more than half of all new fossils in the country come from construction sites, and in states like California with powerful regulations, that figure may be as high as 70 percent.

A 2009 federal law, the Paleontological Resources Preservation Act, aims to protect fossils uncovered during development of federal land. Previously, a patchwork of laws including the Antiquities Act of 1906 and the Federal Land Policy and Management Act of 1976 protected objects of historic and scientific interest on land owned by the federal government, but there was no clear directive for handling fossils. “The intent was to take the hodgepodge of laws that we were using and create a more uniform approach to managing paleontology resources on federal lands,” says Patricia Hester, a paleontologist in Albuquerque who oversees the western region of the Bureau of Land Management, one of the federal agencies responsible for enforcing the new law. “Now,” she says, “when you’re doing work on public land in an area that’s likely to have fossil resources, you have to show how you’re going to deal with them,” a process known as mitigation paleontology.

Geology is the best indicator of promising fossil beds, so before a development project gets under way, paleontologists assess the location. Sedimentary rock such as sandstone and shale, created from layers of deposited material, does an especially good job of preserving animal and plant remains. The experts also review whether nearby or similar geological formations have produced important specimens. Evaluating all this information, they give the site a score for its fossil potential. If it receives a high rating, the scientists develop a mitigation plan for cleaning, sorting, and analyzing any fossils that turn up, and professional monitors stay on location to observe construction work.

Still, the new law applies only to federal land (pdf), which makes up about 30 percent of the country’s area. Many states, especially fossil-rich ones like Colorado, North Dakota, and Utah, have their own rules about fossil salvage, but enforcement is spotty at best, even on state-owned property, Fisk says. And on private lands, fossil finds are all but totally unregulated nationwide. “We almost always make major discoveries of new species when construction sites are properly supervised, which suggests that in unregulated areas, we’re losing valuable resources forever,” he says. Scientists point to California, which boasts some of the most comprehensive regulations in the nation, as a model for other states. The California Environmental Quality Act of 1970 requires an analysis and mitigation plan for potential fossils on large-scale construction projects regardless of whether the land in question is publicly or privately owned. Extensive recent fossil finds in the state confirm the value of such laws and underscore the need for tougher national rules to preserve these precious resources, Fisk says. “Every fossil adds to our knowledge of the evolution of life on this continent over the last 300 million years,” says Robert Reynolds, a mitigation paleontologist with lsa Associates, a consulting group based in Riverside, California. “They’re worth protecting as an essential part of our national heritage.”

Mitigation Paleontology A specialty focused on protecting fossils discovered during construction, including preliminary site evaluations, monitoring for fossils, and preserving them for study.

Dire Wolf A carnivore slightly larger than the modern gray wolf that roamed North America until about 10,000 years ago. Workers found dire wolf fossils while digging a parking lot in L.A.