A White Christmas — in Hawaii!

An animation of satellite images shows white Christmas on the Big Island of Hawaii . (Source: NASA) A bit more than a third of the lower 48 states of the United States enjoyed (or endured?) a white Christmas yesterday. (That's a smidge less than normal for this time of year.) Meanwhile, halfway across the Pacific Ocean, all that residents of the Big Island of Hawaii had to do to enjoy a white Christmas was to look up. As a blog post by the Cooperative Institute for Meteorological Satellite Studies noted:

. . . a deep cutoff low over the Hawaiian Islands had brought unusually cold air aloft . . . and strong winds, which prompted blizzard warnings to be issued for the high elevation summits of the Big Island of Hawaii on 23-24 December. 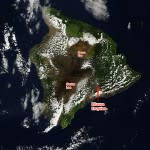 Big Island of Hawaii. (Satellite image: NASA) You can see the result in the animation above. I put it together using images from NASA's Terra and Aqua satellites. To get yourself oriented, click on the thumbnail at right. I've marked the two big volcanic summits, Mauna Loa and Mauna Kea, as well as the plume from the active eruption of Kilauea volcano. The first image in the animation was acquired on Dec. 21st by Terra. The two big volcanic mountains on the island, Mauna Loa and Mauna Kea, are snow free at this point. Mauna Loa rises to 13,678 feet (4,169 m) above sea level. At 13,796 feet (4,205 m), Mauna Kea is even higher. Both poke up high enough into the atmosphere for precipitation to fall as snow in winter. The second image in the animation, acquired by Aqua, shows the two summits capped by snow. And the third is a false color version in which thick snow and ice appear in vivid red and orange tones, while small ice crystals in high-level clouds appear reddish-orange or peach. (For more information about this and other false-color imagery from the Terra and Aqua satellites, go here.) 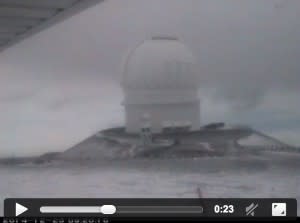 Click to enlarge. (Source: CFHT) If you click on the image at left, you'll be able to watch a timelapse video of the pre-Christmas storm. The video consists of images captured by a web cam at the Canada-France-Hawaii Telescope, or CFHT, at the summit of Mauna Kea, on Dec. 23rd. The animation covers 24 hours, starting at midnight. So it starts with a black screen. But keep watching. At about 15 seconds into the video the sun rises and an observatory dome emerges like a ghost from the clouds and snow streaming across the mountaintop. I experienced snow atop Mauna Kea in person once. I was visiting the CFHT — one of 13 active telescopes on the summit — while working on a book about cosmology. A blizzard had kept astronomers off the mountain for a couple of days in mid-December. I arrived the day after the clouds had cleared, and to my utter amazement I was able to boot ski down one of the cinder cones at the summit.