A Semi-Autonomous Cricket Farm to Feed the World 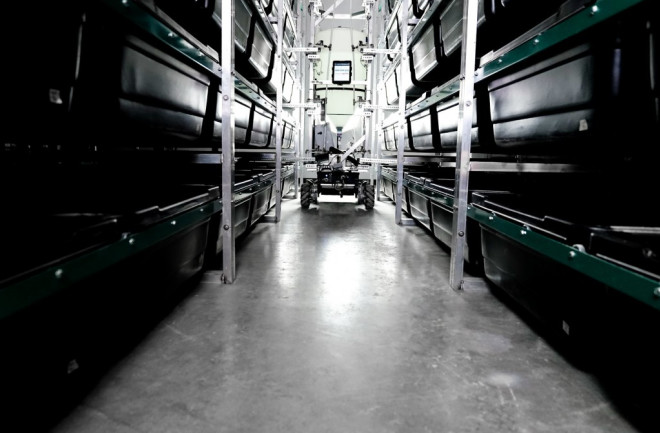 But when it came to launching the concept, they needed to leave convention behind, including most of what had been written in science journals about rearing billions of crickets.

Apparently, people hadn’t been thinking big enough about Acheta domesticus — or at least publishing their ideas.

“There were a few articles out there with a good framework for how insects respond to various conditions, but they didn’t have scale in these experiments. They couldn’t do things in the volume that we could do it,” says Mott. “We had to accept that, and we had to walk away from everything in the scientific literature.”

When Mott says scale, he means isolating variables and conducting tests on at least 60 crates of 10,000 or so crickets. That’s just a fraction of the 22 million crickets raised every month at Aspire Food Group’s indoor test farm in Austin, Texas. Drops of water, hours of light, bits of feed, changes in temperature are all valuable data points, variables, nuggets of truth that will help Mott and the Aspire team continue to optimize every aspect of the cricket life cycle — from birth to cricket flour. (Crickets love a dark, 28 degree Celsius room with about 50 to 60 percent humidity — and keep a lid on water sources, they’ll jump right in and they’re awful swimmers).

The math is simple: As the planet’s population continues to grow by the billions, we need to extract protein, iron, fats and calcium from Earth’s limited resources more efficiently. Pasture for livestock accounts for 70 percent of deforested land use in the Amazon, with feed crops accounting for much of that remaining 30 percent. Beef, chicken and pork production is a significant greenhouse gas contributor, while insects are about as clean as it gets.

“We’ll need to double current food production over the next 30 years in order to feed the growing world,” says Ashour. “The need for more protein is dire, and protein sources that are resilient are particularly important.”

Aspire’s founders are betting big that entomophagy, or eating insects, will be an integral part of the world hunger solution — and in many places it already is. Two billion people around the world already consume insects as part of their regular diet, and the global edible bug biz is expected to grow to a $720 million by 2024, growing at a rate of 6 percent annually. The demand is growing, and Aspire is optimizing the cricket to meet it.

Right now, Aspire is hyper-focused on two things: scale and efficiency. Gathering troves of data about temperature and feed levels to maximize yield output is an endless cycle of experimentation and implementation. And crickets are perfect, chirpy little data generators. The entire cricket life cycle spans about two or three months, which gives Mott ample opportunity to analyze every moment of the organisms’ life, several times a year and among many cohorts, to dig through the data and produce the perfect conditions for cricket production.

“We’re undergoing a constant process of iterations that will eventually land on the perfect conditions for crickets. We think we will get quite close, and very quickly,” Mott says.

Data-driven approaches will help Aspire discover an ideal cricket rearing process, but to put those best practices to use consistently, automatically and at massive scale, they’re leaning on custom-built robotics. Aspire engineers, for example, designed feeder robots that patrol the aisles of cricket bins, adding just the right amount of food and water to each bin based on a well-honed formula improved upon by billions of cricket forebears.

“Automated approaches help you scale exponentially, whereas manual labor is more linear,” says Ashour. “We also use a live box system, and you want to reduce the amount of contact between people and livestock so you don’t stress the crickets.”

Over the next year or so, Ashour expects 70 to 80 percent of the cricket rearing process will be automated, with highly skilled workers providing the rest. He’s quick to add that the robots will do the grunt work, but the future of insect farming will always be a hybrid approach that relies on human expertise.

“Automation can replace low-skill labor, but we are creating new discipline of jobs that haven’t existed before,” he says. “For many entomology grads, they find themselves working for pest companies where their job is to raise insects and learn how to kill them. We’re creating a discipline in entomology for scientists to use their love of insects, not to fight pests, but as a food source that we need to optimize.”

And with the right balance in place, Aspire plans to rapidly expand its scale test farm to something that might resemble a commercial operation. Right now, Aspire’s total protein output is just a drop in a very large bucket.

“Annually, the world produces and consumes roughly 8.8 billion pounds of whey protein powder alone. Our next facility will produce around 300,000 pounds of protein powder a year,” Ashour says. “It’s a drop in the ocean.”

Aspire’s current facility in Austin is roughly 25,000 square feet. In 2019, they want to use what they’ve learned to scale the operation up to an indoor facility 10 times that size. From there, it’s a matter of copying and pasting the design to connected facilities around the world.

Eventually, billions and billions of crickets will be feeding data into more than 100 cricket farms, all connected to a data-sharing network. It’s no surprise then, that John Chambers, the former CEO of networking giant Cisco Systems, is a significant investor and advisor at Aspire.

Aspire’s entomophagy marketing blitz will focus on two groups of people: those that already rely on insects, and those who don’t know they love them yet. In many developing countries, insects are a staple of the diet. For Aspire, the challenge in these markets is setting up cheap and efficient farming methods that can be easily adopted. There’s high demand, but a supply problem. That’s why they’ve started commercial palm weevil larvae pilot farms — another tasty insect — in Ghana.

“Palm weevil larvae are in demand in Ghana; it’s a center-of-plate meat dish. They need scale and a low price-point. So our focus there is on reducing the costs of production,” says Ashour.

But in markets like the United States, where insect eating might be trendy but not essential, the problem is psychological, semantic. The trick is to take the “ick” factor out of the equation with products that are made with processed crickets rather than whole crickets — it’s perhaps easier when you don’t see the eyes. To this end, Aspire has launched Aketta.com, which offers cricket-based staples like powder and granola.

Earlier this year, Saison, a three-star-Michelin restaurant in San Francisco, served up fancy dishes using Aspire ingredients: caviar with broth cricket made from cricket sauce, prawns grilled with and sea urchins in a sauce of grilled bread and crickets. sweet cricket glaze. This, no doubt, appeals to the foodies among us. But for an entire culture shift to occur, Ashour wants to change the way we talk about entomophagy.

“Most insects out there shouldn’t be eaten, and there’s a legitimate, biological instinct not to eat them because many insects can be dangerous,” Ashour says. “But that other 1 percent includes hundreds or thousands of edible insects, and we need a way to separate these two groups from each other in the eye of the consumer.”

We don’t say we are eating mammals. We say we’re eating beef, or pork, or poultry. Ashour wants to come up with a similar terminology for edible bugs to further disassociate the edible and the inedible. Entomunchies? Entosteaks? Alternative protein? (All suggestions from the author).

Whatever we call the insects, there’s a good chance we’ll see more ento-related products on store shelves in the near future. And as our palate for crickets and other tasty bugs continues to be refined, Aspire hopes to satiate our eco-friendly appetites one cricket, and one robot, at a time.