A Possibly Historic Snow Storm in the West, Plus a Heat Wave in the East — What’s Going On? 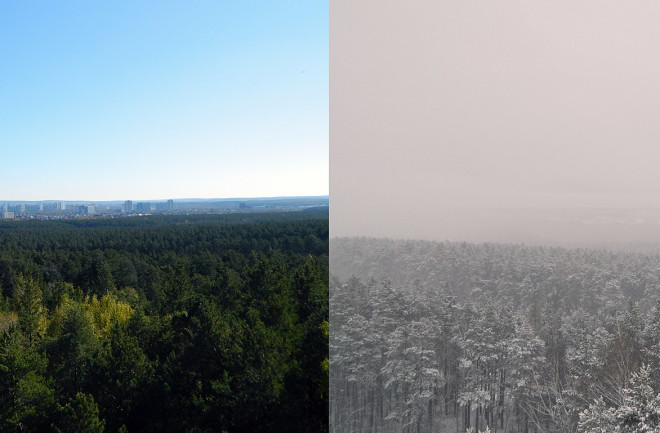 Historic snow and a heat wave? That’s what a downright loopy jet stream pattern is bringing to large parts of the United States.

Parts of the Northern Rockies are bracing for what the National Weather Service in Missoula, MT is describing as an “historic winter storm this weekend,” with up to five feet of snow forecast. (Click on the graphic above for details.)

Although this part of the United States is no stranger to early autumn snow, it’s not usually measured in feet.

Meanwhile, parts of the U.S. East Coast are continuing to experience temperatures well above normal for this time of year — and conditions are forecast to heat up even more, potentially to record-high levels next week.

With a stubborn “heat dome” parked overhead, the Southeast has already been enduring one of its hottest Septembers on record. And the strength of the dome is forecast to intensify next week to a point that occurs just one day every 10 to 30 years during this time of year, according to an analysis by meteorologist Rob Elvington of WAAY TV in Huntsville, AL

The orange line traces the forecast path of the jet stream for Sunday, Sept. 30. (I pulled that forecast on Friday the 27th — it may have changed a bit by the time you’re reading this.) That path is, in a word, all loopy.

To be more precise, it features big north-south bends. And it’s those bends that have formed the set-up for the weird weather extremes.

Note how the jet stream plunges in a deep southward bend over western Canada and the northern U.S. Rockies. That is allowing cold air to drop south.

The big dip in the jet stream has also energized a low pressure system that began near the Four Corners region. Add in copious moisture the loopy jet is helping to pump to the north, and you have, in the words of Washington Post meteorologist Matthew Cappucci, “a virtual snow-making machine as the ingredients gel Saturday night and Sunday.”

Meanwhile, see how the jet stream bends far to the north above the Great Lakes and Maine? That is allowing very warm air to invade from the south. The heat dome sits within that persistent upward bend.

Back in May of this year, wild weather contrasts ranging from violent thunderstorms to abnormal cold and snow were gripping large parts of the United States. At the time, I reported on links between a wavy jet stream and these extremes:

As humankind’s emissions of heat-trapping greenhouse gases have warmed the planet, the heating has not been uniform. Warming in the Arctic has been at least twice as pronounced as in the lower latitudes. This means the difference in temperature between the regions is not as less than it once was.

Mounting scientific evidence shows that this has caused the jet stream to behave more and more like a lazy stream flowing across the plains, with an increasing frequency of persistent big meanders — just like those we’ve been seeing this week, and earlier in the year as well.

That behavior has been linked by researchers to extreme wintry weather during the cold months, and dramatic heat waves during the summer. But the linkages during spring and fall are not all that clear.

Overall, emissions of greenhouse gases into the atmosphere have caused increases in high temperature extremes and extreme precipitation events around the world, according to the most recent U.S. National Climate Assessment. And the United States itself has not been immune to that trend. Far from it.

As the graphic above shows, the contiguous United States has seen a rising trend in the percentage of the region experiencing daily high temperatures that are much above normal. A similar rising trend has occurred in the percentage of the United States with a much greater than normal proportion of precipitation derived from extreme one-day precipitation events.

At this point, it would be inappropriate to directly attribute both the developing northern Rockies early autumn snow storm, and the Eastern heat wave, to human-caused climate change. That kind of direct attribution takes detailed scientific detective work after the fact.

But what we’re seeing is part of a broader trend that research increasingly links to our influence on the climate.