A Novel That Laughs Along with Climate Change: Ian McEwan's Solar 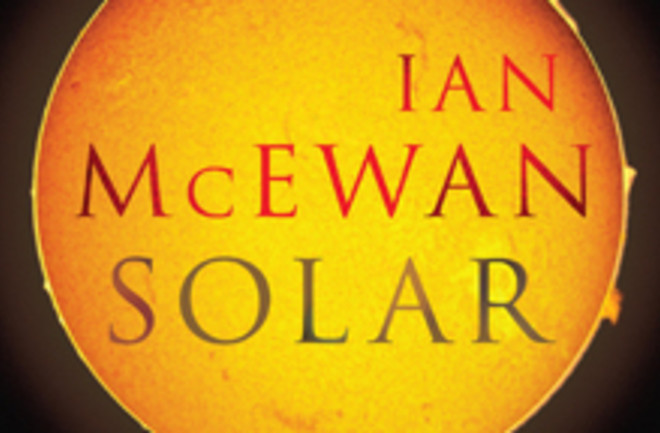 "It's a catastrophe. Relax!" Those are the words of Michael Beard, the Nobel laureate physicist long past his prime who is the anti-hero of Ian McEwan's new novel Solar, out this week in the United States. McEwan, no stranger to writing scientist characters or scientific themes, dives this time headlong into climate change. McEwan says he was nervous attempting to write fiction about a subject that has the potential to be, well, dull. But Solar is a laugh-out-loud read thanks to its ridiculous protagonist and willingness to make light of the apocalyptic seriousness of the conversation. At the book's outset, in the year 2000, Beard isn't particularly convinced about climate change. He's coasting on his reputation as a Nobelist, making money giving repetitive lectures and sitting on various boards, when suddenly he finds himself in charge of a shiny new British government research center out to build the next new thing in alternative energy.

In the second part of "Solar," Beard has become a believer in global warming, working on a way to get non-carbon power from artificial photosynthesis—a new application of a never-quite-explained theory that he came up with in his 20s. Unfortunately, he didn't discover the application himself. He stole it from his dead assistant [Wall Street Journal]

, the marvelously enthusiastic (or at least enthusiastic until an unfortunate encounter with a coffee table) Tom Aldous. McEwan says he'd been thinking about writing a book connected to climate change for a decade or so, but many bits of Solar capture the feel of the current climate change landscape (including some of the lunacy on both sides). Indeed, artificial photosynthesis is one of the hottest ideas in solar energy, given its potential to use up carbon dioxide in the process of making energy, just like plants do. DISCOVER will soon be covering some of the real-life scientists trying to use the sun's energy to split water, freeing electrons that could start energy-creating chemical reactions. In the third and final part of Solar, Beard's New Mexico artificial photosynthesis plant doesn't turn out so well, though that has more to do with his sad personal life than his solar technology. The running gag that might appeal most to scientist readers is Beard's repeated failings to connect with people in the humanities. Despite his numerous personal failings, Beard regards himself as a man of rationality and can't quite figure out how to converse with post-modernists. Science news followers will recognize the darkly comic scene in which

Beard makes some politically incorrect remarks about women and becomes the subject of a media feeding frenzy, somewhat reminiscent of the 2005 imbroglio involving Lawrence H. Summers, then president of Harvard [The New York Times]

. In a knowing episode that many critics praise as the book's funniest, Beard attends one of those trips to the Arctic to see climate change firsthand, only to find himself the only scientist in a cadre of artists and activists, including one artist who carves polar animals from ice blocks and others who also balance solemnity and naivety. "All these demonstrations, like prayers, like totem-pole dances, were fashioned to deflect the course of a catastrophe," McEwan writes. The Arctic trip is an exaggerated version of one he made himself. For example, on the real trip McEwan

was preoccupied by the thought of having to urinate at -40 °C but was never desperate enough to risk it, as Beard does, only to have his penis freeze to his zipper [New Scientist]

. There are spots when Solar bogs down, but they concern Beard's train-wreck personal life (which also prevents the admittedly smart man from accomplishing his plan of saving the world and making a lot of money). McEwan does an admirable job of sliding climate change science into a novel without getting too hung up on it for the reader's good. Says McEwan:

"I think one of the reasons I find a lot of novels boring is that they're only about the emotions; they don't have enough muscular intelligence. I like novels that have got both. A good number of novels are just so timid, intellectually" [New Scientist]