The NOAA-20 satellite was to be the first of four, but the Trump Administration has sought to delay and massively cut the program 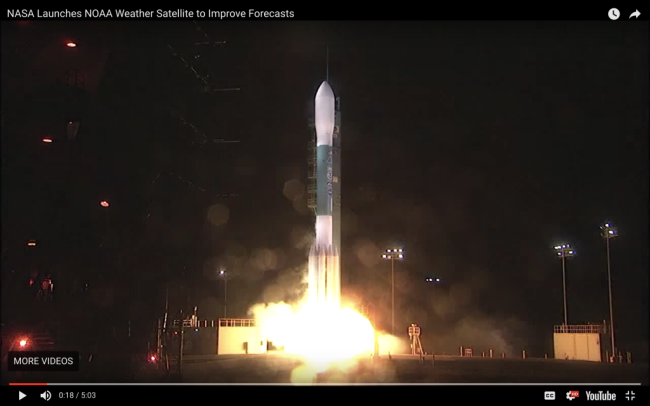 The Joint Polar Satellite System-1 lifted off from Vandenberg Air Force Base, California, at 1:47 a.m. PST on Saturday, Nov. 18, 2017. When it successfully reached orbit, it was officially renamed NOAA-20. (Click the image to watch a video of the liftoff.) The satellite is designed to help meteorologists produce more timely and accurate U.S. weather forecasts three to seven days out. (Source: NOAA) In the early morning hours of Saturday, Nov. 18th, a Delta II rocket roared to life and propelled the newest U.S. weather satellite into orbit on a column of fire that lit up the nighttime sky of coastal California. The NOAA-20 satellite is now circling the globe 14 times a day, orbiting from pole to pole at about 520 miles above the surface. It is equipped with five instruments representing significant advancements from those on NOAA’s previous polar-orbiting satellites. NOAA-20 (called JPSS-1 prior to reaching orbit) is now on a shakedown cruise of about three months. "The data these advanced instruments provide will improve weather forecasting, such as predicting a hurricane’s track, and aid in the recognition of climate patterns that can influence the weather, including El Nino and La Nina," according to NOAA. Data from NOAA-20 are also expected to help emergency managers respond to wildfires, volcanic eruptions, and other natural disasters. The satellite's better views of damage and the extent of power outages should help communities recover. "This year’s hurricane and fire seasons demonstrated just how critical NOAA’s Earth observing satellites are for forecasting extreme weather and hazardous events,” said Rear Admiral Timothy Gallaudet, Ph.D., acting NOAA administrator. NOAA-20 won't last forever – it is designed to operate for seven years. So it is supposed to be the first in a series of four satellites, with the next one scheduled for launch in 2022. But the future of the program has been called into question by a delay and massive budget cuts proposed by the Trump Administration. Even Republicans in Congress are scratching their heads over this (more about that in a minute). That's because they know that without advanced Earth observing satellites, Americans would suffer far greater damage, injuries and fatalities from natural disasters. If you have any doubts about that yourself, consider the the Great Galveston Hurricane of 1900. On August 30th, 1900, Galveston, Texas was a thriving boom town of 40,000 people. Its sandy beaches had drawn flocks of late summer tourists. Little did they know that a massive hurricane would soon visit unimaginable death and destruction on them. A day prior to landfall, the Galveston Weather Bureau did suspect something was coming. So they ran two flags up a pole atop their building, issuing what was the equivalent at the time of a hurricane warning. But with no satellite images of the approaching storm to provide tangible evidence for what was about to happen, and no commercial radio broadcasts (let alone TV or internet) to send out the hurricane warning, Galveston residents and the many summer tourists were caught unawares when the hurricane blasted ashore on September 8th. Packing winds of 135 miles per hour, and pushing up 15-foot storm surges, the hurricane destroyed 6,300 buildings, and killed 6,000 to 12,000 people. The storm remains the deadliest natural disaster in U.S. history. Flash forward to the morning of August 30th of this year. Over the far eastern Atlantic, the ninth named tropical system of the 2017 Atlantic hurricane season was taking shape: Irma. The storm would soon explode into a major, record-shattering hurricane that ultimately laid waste to islands in the northern Caribbean before taking aim on the Bahamas and Florida. But this time, thanks to modern forecasts made possible by weather satellites, residents knew what was coming days in advance, allowing them to prepare their homes and flee. In the Bahamas, 5,000 people evacuated – the largest in its history. In Florida, 6.3 million people were ordered to evacuate, probably the largest in U.S. history. Tragically, Irma ultimately killed 134 people. But compare that number to the thousands who died in the Great Galveston Hurricane. For all of its uncertainties, modern forecasting made possible by weather satellites has clearly made a huge difference. 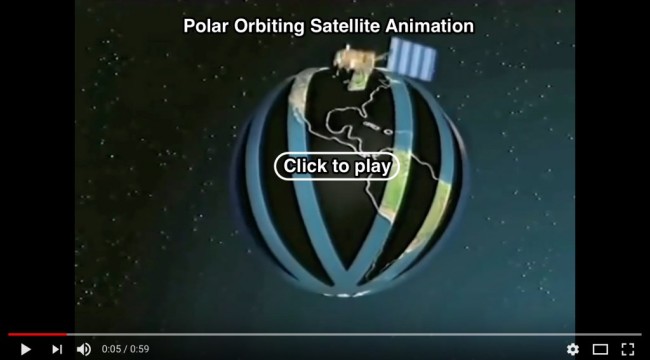 Screenshot from an animation showing how a polar-orbiting satellite like NOAA-20 can take advantage of Earth's rotation to scan the surface. (Source: EUMETSAT) Like other polar-orbiting satellites, NOAA-20 will take advantage of Earth's rotation to see a different swath of territory with each of its 14 daily orbits. In this way, it can actually observe every spot on Earth – and the atmosphere above it — twice each day. (For an animation of how this works, click on the screenshot above.) Moreover, since the altitude of a polar-orbiting satellite is relatively low compared to a geostationary satellite (which maintains a constant position above the equator at a distance of 22,300 miles), it can make observations at higher resolution. Thanks to its sharp eyes and blanket coverage, polar orbiting satellites provide about 85 percent of the data needed by American weather forecast models. “Our forecasting ability has dramatically improved over the last decade and polar satellites deserve most of the credit," says Mark Sargent, director of a Raytheon program involved in ground control of NOAA-20. And with the newest satellite, "it's about to get better." The Trump Administration's FY 2018 budget request for NOAA does include $180 million to develop the three follow-on missions to NOAA-20. But that represents a whopping $189.3 million cut. The administration also wants to re-open planning for the program, and delay sending the third and fourth satellites into space. Luckily, the U.S. Senate Committee on Appropriations has taken a dim view of the administration's proposals for the Polar Follow-On (PFO) missions. In a July 2017 appropriations bill, the committee stated it that it "strongly rejects" the proposed cuts. Here's the language from the appropriations bill:

Funding for PFO is critical for maintaining polar orbiting satellite data, which is already at risk for a potential gap due to program mismanagement and funding shortfalls in PFO’s predecessor programs. These satellites provide 85 percent of data required for the National Weather Service’s Numerical Weather Prediction models. These data are required for accurate forecasts 3–7 days in advance of a severe weather event, including hurricanes and superstorms. Accurate forecasts allow emergency managers and communities to make timely decisions to protect lives and property. In light of the critical role that these satellites play in protecting American lives and property, the Committee finds it perplexing that the Department of Commerce and NOAA would propose to cut this program. This cut, and the proposed but unspecified postponement of the JPSS–3 and JPSS–4 satellites, would introduce a weather forecasting risk that this Committee is unwilling to accept.

The "mismanagement" referred to by the appropriations bill dates back to the early 2000's. It was related to challenges encountered by three separate federal entities charged with jointly managing the nation's polar orbiting satellites. To correct the problems – which threatened to cause a gap in delivery of crucial weather data – NOAA and the Department of Defense were given separate responsibility for managing their own polar orbiting satellites. That was in 2010. Since then the situation has improved, according to two reports from the Government Accounting Office, one in 2012, and another in 2016. Now, with the successful launch of NOAA-20, the risk of a dreaded gap in weather data has receded. But the Senate Appropriations Committee does not have the final say over funding for continued funding of the satellite program. So for now, it's fate is still up in the air. Meanwhile, the National Weather Service itself is "teetering on the brink of failure," says the service's labor union. As reported by the Washington Post's Jason Samenow:

After the onslaught of devastating hurricanes and wildfires, the United States is enduring one of its most costly years for extreme weather. A near-record 16 billion-dollar weather disasters have ravaged the nation. Meanwhile, the National Weather Service workforce is spread razor thin, with hundreds of vacant forecast positions.

With so much on the line, we can only hope that the Trump Administration will get its act together to fill those positions – and also to make sure that the nation's polar orbiting satellite program gets the support it needs to help provide us with faster and better weather forecasts.