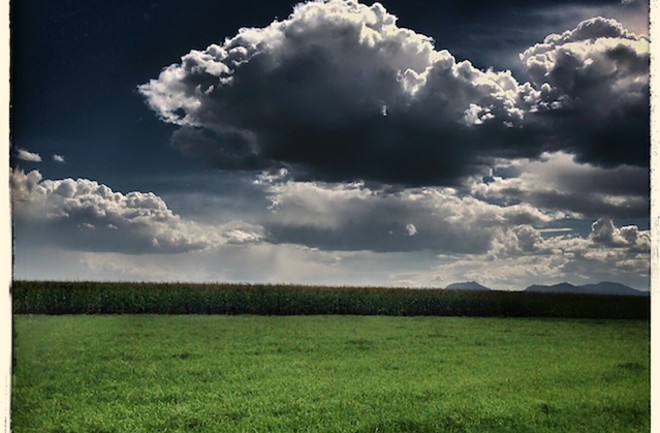 A cumulus cloud blossoms over corn fields near Niwot, Colorado on August 31, 2014, as seen in this iPhone photo-mosaic. (Photo: © Tom Yulsman) Whether it's an iPhone in my pocket or something more sophisticated hanging around my neck, I'm rarely without a camera. So I find myself shooting photos pretty much daily. The subjects vary, but often they fall into a category I would describe as "every day wonders." From a monsoon cloud blossoming over the mountains and moving out onto the plains, as in the image above, to a spider snacking on a tasty wasp (stay tuned for a photo of that), these events are quite common. But in our busy lives, we're often only dimly aware of them, if at all. That's why I'm launching a new, semi-regular feature here at ImaGeo: "Every Day Wonders." In it, I'll feature photographs of aspects of nature that have stopped me in my tracks and triggered a sense of awe. For the most part, these images won't be of unusual things (although I'm sure there will be some of that), but rather of things around us all the time that often escape our consciousness. The photographs I showcase here won't necessarily be straightforward representations of what I saw. What I imagine when I gaze up at a thunderhead blossoming over a corn field isn't necessarily what the raw photographic data collected by my camera look like. Those data comprise just the starting point for a creative process that results in a true photograph, as opposed to a mere snapshot. In his autobiography, Ansel Adams put it this way:

With digital technology, the details of the creative process are obviously different than in Adams' day, and a final print isn't always the objective, since we mostly publish photos to the web these days. But the purpose remains the same: a personal vision. I don't pretend to be even remotely akin to Ansel Adams. But I do aspire to do more than present a mere "image-record" of the object before my lens. The image at the top of this post is an example. I was on a bike ride with my wife over the Labor Day weekend when I saw this cumulus cloud blossoming over a farm field. The summer monsoon was especially active during August in Northern Colorado, and so pastures are unusually green for this time of year — astonishingly so, in fact. Ordinarily, anything not irrigated would be dry and brown. So I stopped, pulled out my iPhone, and used an app called Autostitch to create a mosaic of photos of the scene. Back at home I used another app called Snapseed to create what I envisioned in my mind's eye. The result is the image above. Because it consists of relatively low resolution iPhone images, there are some flaws if you look closely. But overall, I hope it conveys the awe I felt as I watched this cloud grow and move across the unusually lush High Plains. Given my own preoccupation with atmospherics, there will likely be many more photos of clouds as I roll out this feature. But now that I'm starting down this path, I'll try to look down as well as up. No telling what wonders lurk under my feet. — Tom Yulsman P.S.: I'm hoping to solicit contributions from Discover readers. That's a little down the road. First I have to organize a system for accepting and evaluating contributions. But that's coming, so please stay tuned.