A New Climate Survey Tells Us What?

Sometimes I think the climate debate remains stalled because those who are most concerned refuse to ask the pertinent questions. Instead, they keep refighting old battles that are no longer relevant to a constructive discourse. The latest example is this survey by John Cook et al that is getting a lot of undeserved attention in the mainstream media. I say that because, questionable methodology aside, the survey tells us nothing new and is, as science journalist David Appell noted, "a meaningless exercise." The main finding, which was just published in the journal Environmental Research Letters:

A new survey of over 12,000 peer-reviewed climate science papers by our citizen science team at Skeptical Science has found a 97% consensus in the peer-reviewed literature that humans are causing global warming.

This strikes me as T-shirt worthy. Oh wait... 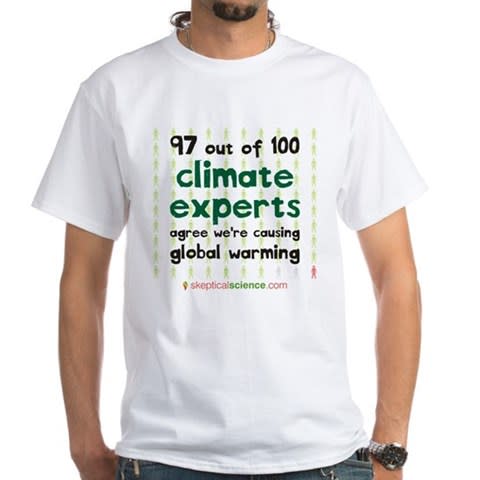 In a short post at his blog, Appell says these kinds of survey numbers

are made for lazy journalists who don't want to examine the complexity of the science, reporters who just want a number that quickly and easily supports their position.

He's right. In a minute, I'll get to the kinds of complexities that would be good to examine, but first let's look at the premise for the survey, as stated:

An accurate perception of the degree of scientific consensus is an essential element to public support for climate policy (Ding et al 2011). Communicating the scientific consensus also increases people's acceptance that climate change (CC) is happening (Lewandowsky et al2012). Despite numerous indicators of a consensus, there is wide public perception that climate scientists disagree over the fundamental cause of global warming (GW; Leiserowitz et al2012, Pew 2012).

To start, Cook willfully ignores the "salience" issue that cognitive researchers have pointed out in recent years. That's the main obstacle to greater public support for action from the large majority of people who already agree that global warming is real and worrisome. Then there is the deep partisan divide between Republicans and Democrats on the climate issue (with Republicans much less likely to believe the scientific consensus than Democrats), though there is evidence that denial is not a tenable position for the Republican party. As for an overall snapshot of trending public attitudes on climate change, let's look at this latest Gallup report, as distilled by the National Center for Science Education:

Note that last sentence, which I bolded. For a longer view, let's go to Gallup's wrap-up:

Gallup trends throughout the past decade -- and some stretching back to 1989 -- have shown generally consistent majority support for the idea that global warming is real, that human activities cause it, and that news reports on it are correct, if not underestimated.

That said, it is indisputable that there remains "considerable confusion within the American public about the level of scientific agreement" on the causes of global warming, as discussed in the latest report by the Yale Project on Climate Change Communication. Would it be better if there was less confusion? Of course. But If 75 percent of the general public, instead of say, 50 percent, attributed global warming to industrial society and its greenhouse gases, would that make people more concerned about climate change? Probably not, because in the same Yale report, there's this:

Over many years of research, we have consistently found that, on average, Americans view climate change as a threat distant in space and time--a risk that will affect far away places, other species, or future generations more than people here and now.

That. Is. The. Stumbling. Block. Getting past that is going to require a frank debate about future uncertainties, risks, and scenarios, and the reconciliation of competing values. Meanwhile, in a recent talk, climate researcher Mike Hulme asks if is wise to even continue emphasizing scientific consensus in the climate debate-- "as an end to argument?" It is a thought provoking piece that quotes from a 2011 essay in Nature by Arizona State University's Daniel Sarewitz, who said:

Science would provide better value to politics if it articulated the broadest set of plausible interpretations, options and perspectives, imagined by the best experts, rather than forcing convergence to an allegedly unified voice.

I bet this is something that 97 percent of climate scientists would agree on. UPDATE: Yale's Dan Kahan says it best.