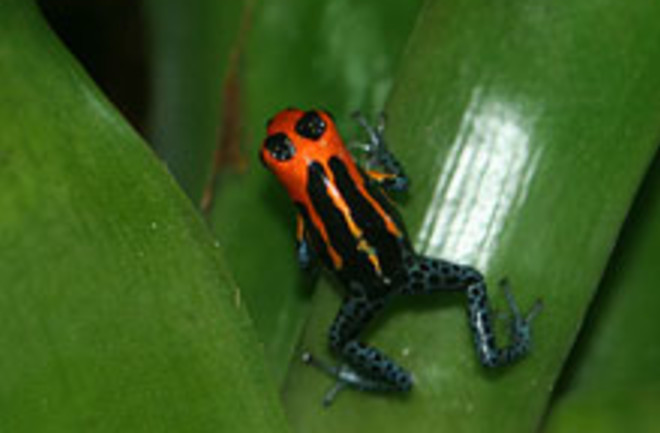 Monogamy isn't popular in the amphibian world. From frogs to salamanders, life in cold blood is all about meeting new ladies and hitting the road once the kids are born. So the male of a species of Peruvian poison frog (Ranitomeya imitator) stands out by proving that he is quite the keeper. He's not only the first monogamous frog ever found, he also stays home and makes sure the tadpoles are fed. Scientists studying these frogs say this unusual behavior--monogamy and co-operative parenting--could be directly attributed to the limited resources available to the frogs. They note that a broad study of 404 frog species show that species that deal with reduced food availability and greater difficulty in tadpole-rearing are more likely to have frog couples that work together to raise the young. These findings could possibly shed some light on the way our hunter-gatherer ancestors approached monogamy. Details of the findings are to be published in the April issue of

Scientists studying the mating and parenting habits of R. imitator frogs found that the female frog lays her eggs on leaves for the male to fertilize. When the fertilized eggs hatch into tadpoles, males of other frog species like Ranitomeya vairabilis normally hop away, thinking their job is done. But the R.imitator male sticks around to carry the tadpoles on his back to individual pools of water where they can grow in safety, under dad's watchful eye. The female frog stays behind, but is summoned to service by the male once a week for a few months; she hops to the tadpole-rearing pools to lay unfertilized eggs for the hungry tadpoles to eat. Evolutionary ecologist Kyle Summers was studying the frogs, and wondered if the size of the pool had anything to with the way the frogs approached joint parenting.

[ScienceNow Daily News]. Using available data on 404 frog species, scientists observed that frog species that raised their tadpoles in small pools were likely to be more doting parents; the findings suggest that

if the pools were bigger, the frogs wouldn't have to remain faithful, as they wouldn't be tied by their need to work together to raise their brood [BBC].

To make sure that the frogs were truly being faithful to their partners, the researchers took DNA from the toes of parent frogs and the tails of their tadpoles and

ly monogamous couples they monitored over the mating season had been sexually faithful making R. variabilis

The scientists say that studying the frogs could give us insight into the role that resources play in monogamy, and suggest that when human hunter-gatherers had to scramble for food and warmth, they were less likely to stray. Related Content: 80beats: Frogs Pee Away Scientists' Attempts To Study Them Discoblog: Video: How Male Frogs Kick up a Frog Froth to Protect Their Young80beats: Commitment-Phobic Men Can Blame Their DNA DISCOVER: Sex and the Female Agenda DISCOVER: Sex and Control DISCOVER: Mating Like an Animal: The Real Story