Research on past climates is showing how we can help plants that are running out of places to go as their habitats warm. 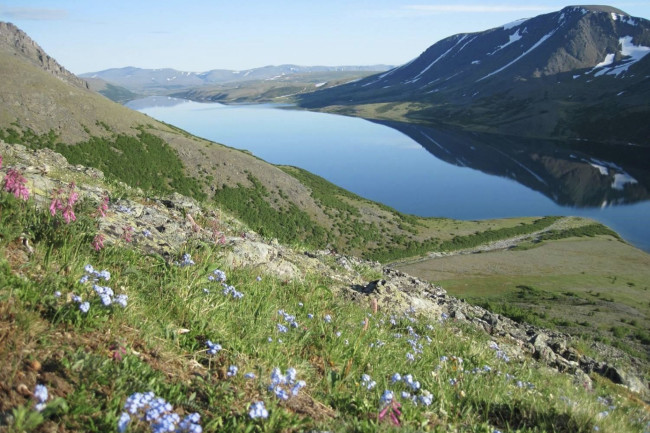 Lake Bolshoye Shchuchye at the northern end of the Urals mountains in Russia. Researchers are trying to gain insights into what might happen to arctic-alpine plants like those seen on the high mountain slopes, such as forget-me-nots and fireweed. (Source: John-Inge Svendsen)

As deserts expand, sea levels rise and other climate impacts make some regions uninhabitable, tens of millions of people will be displaced from their homes.

They won't be alone.

Thanks to human-caused climate change, countless plants and animals will also need to move in order to survive. But as disruptive as climate migration will be for humans, many of our fellow inhabitants of Earth will not have the options that will be open to us.

That could be particularly true for plant species adapted to living in the Arctic — a region warming twice as fast as any other on Earth. At a certain point, they will not be able to move any farther north to find places safe from competition by shrubs and trees well adapted to warmer temperatures. That's because they'll simply run out of land before hitting the Arctic Ocean and surrounding waters.

For plants adapted to living in the particularly harsh climate of mountainous areas in the Arctic, the prospect of a warming environment is particularly daunting: They can try migrating up mountainsides, but they will eventually reach the top and have nowhere else to go.

"There is not so much space if you move too far up and go too far north," says Inger Greve Alsos, a scientist with The Arctic University Museum of Norway. "So will they survive this warming?"

To preserve the diversity of these plant species facing the threat of human-caused warming, what helpful measures could we take?

These questions are at the heart of her research, which Alsos described at the recent Arctic Frontiers conference in Tromsø, Norway. 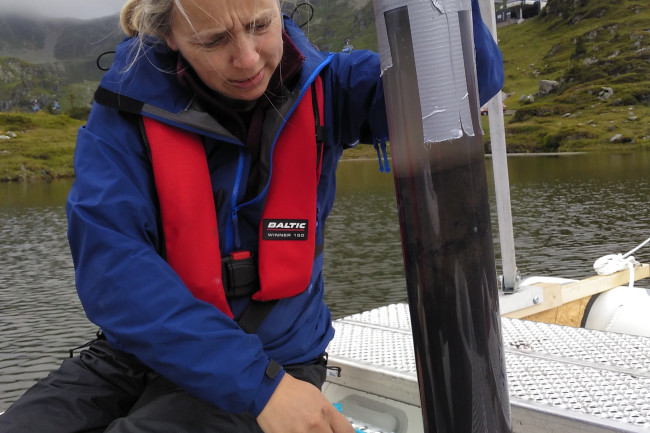 Inger Greve Alsos examines a core of sediment just drilled from the bottom of a lake. DNA preserved in the sediments from cores like this one helps Alsos and other scientists determine what species were thriving in previous millennia. (Source: Sandra Garces Pastor via Inger Greve Alsos)

You might be wondering why anyone should care about plants that live in an environment so far removed from most of us. I wondered that too — so I asked Alsos about it.

The threat is not unique to arctic-alpine plants, she noted. High altitude plants around the world are facing it too.

More generally, "plants are an essential source of food and medicines. And for many species, we do not know their value yet. Thus, if we do not preserve arctic-alpine biodiversity, we may lose species that could be valuable to mankind."

Most broadly, a diversity of plant species helps preserve the health of ecosystems — which play an essential role in the planetary life support systems we depend on.

If we want to find ways of protecting species from climate change, understanding how they responded to past shifts can be helpful. With this in mind, Alsos digs — or, more accurately, drills — into the past. Specifically, she drills cores of sediment from the bottom of Arctic lakes. These cores preserve bits of ancient plant DNA from the species that were growing during times past.

"I am glimpsing into the past and hoping to say something about the future," Alsos told scientists gathered at the Arctic Frontiers conference. The work is already providing clues that could prove useful to preservation efforts.

Research like this actually has very deep roots in a revolutionary insight from the early 1800s. As described by Tim Appenzeller in the journal Science, that insight came to the the explorer Alexander von Humboldt while he was climbing the soaring Ecuadorian volcano Chimborazo in 1802.

"Not long after his descent from the mountain," Appenzeller writes, "he sketched a spectacular diagram that used the slopes of Chimborazo to depict a concept that had crystallized during his climb: that climate is an organizing principle of life, shaping the distinct communities of plants and animals found at different altitudes and latitudes. Two centuries later, that idea is giving scientists an intellectual framework for understanding how human-driven climate change is transforming life. " 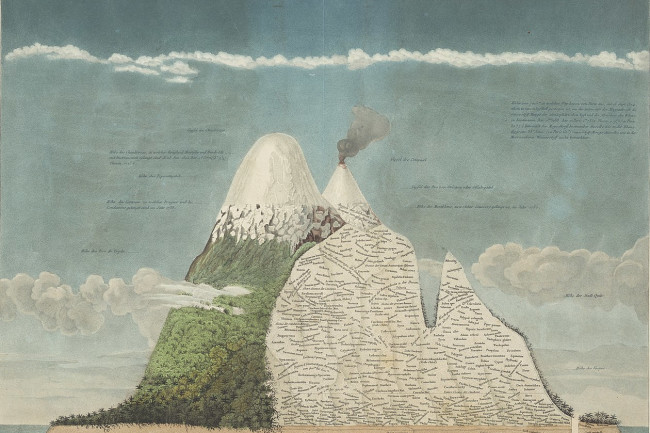 In an 1807 illustration of the volcanoes Chimborazo and Cotopaxi in Equador, Alexander von Humboldt mapped vegetation living at different elevations. (Source: Wikimedia Commons)

As Alsos describes it, the lesson from von Humboldt's transformative insight is that "life is driven by climate — and all research has proven this right.”

Including, it must be said, her own.

The work of Alsos and her colleagues depends on the fact that DNA from plants growing around a lake "will sooner or later end up at the bottom," she says. Year by year, layers of sediment containing plant DNA accumulate, preserving it. In this way, cores of this sediment serve as a kind of history book, documenting the ebb and flow of different plant species as the climate warmed and cooled from natural causes. 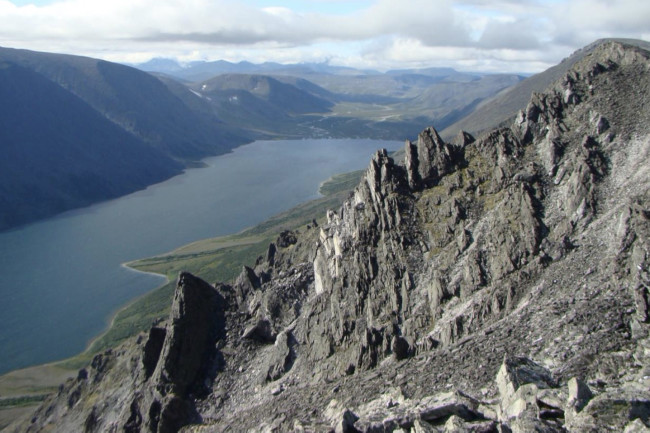 One of the lakes cored by Alsos and her colleagues is at the northern end of the Urals range in Russia: Lake Bolshoye Shchuchye.

"We got a core there that covers 24,000 years — the longest continuous botanical record for that region," she says.

DNA analysis of the core revealed that from 24,000 to 15,000 years ago the area around the lake was dominated by arctic-alpine plants. Mammoths roamed this treeless landscape. 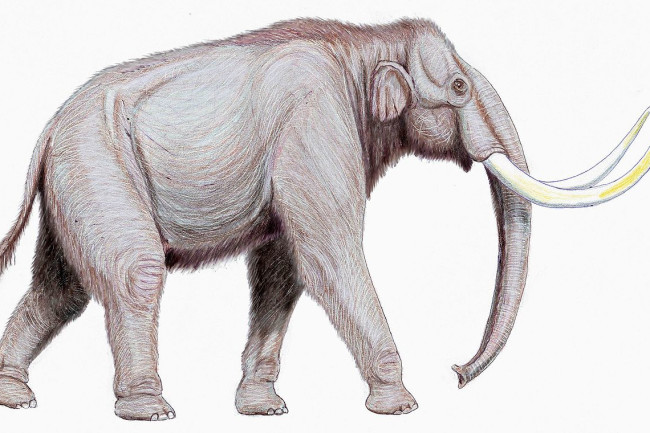 It's called that because of the magnificent creature depicted in the illustration above: the mammoth.

And this is something akin to the landscape it roamed in thousands of years ago: 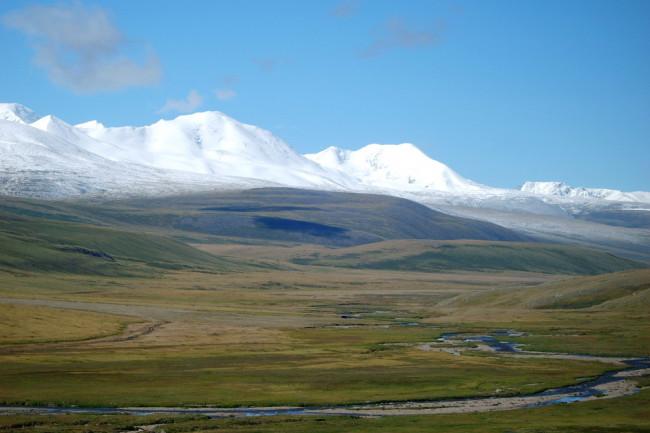 Research suggests this part of the Altai-Sayan region in Russia is the closest modern analogy to the mammoth steppe. (Source: Kobsev at ru.wikipedia)

Up until 15,000 years ago, the environment around Lake Bolshoye Shchuchye might have looked something like this: treeless and dominated by low-lying vegetation adapted to very cold temperatures.

But the DNA analysis by Alsos shows that starting at about that time, temperatures began to warm, and dwarf shrubs expanded into the area. Then, at about 9,000 years ago, a really dramatic change occurred: Temperatures warmed enough for forests to take over, pushing out the arctic-alpine vegetation.

"It looked like most of the arctic-alpine species just disappeared when the forest expanded," Alsos says. "This is really bad news if this is what we can expect in the future."

But a closer look revealed a more nuanced picture that could suggest a better future outcome: Plant species actually managed to hang on here and there, in all likelihood thanks to rocky crags surrounding Lake Bolshoye Shchuchye.

Trees could not gain a toehold in that rugged terrain. But in the nooks and crannies of the crags, many species of mammoth steppe plants found long-term refuge, Alsos believes. When the climate cooled 4,000 years ago, the trees receded and these arctic-alpine species emerged from their refuges to flourish once again.

She and her colleagues documented a similar pattern at other lakes, this time in northern Scandinavia, providing corroboration. Until around 15,000 years ago, the region was covered by an ice sheet. When it retreated, tundra dominated by arctic-alpine species took hold.

With warming temperatures in the region about 10,000 years ago, shrubs and trees invaded, "causing a tipping point in the vegetation," Alsos says. "At some sites, this caused extinction of arctic-alpine species, whereas at other sites they managed to persist."

Once again, a varied landscape likely provided refuges where arctic-alpine plants could persist even as the trees took over in other areas.

A hopeful take-away from the research is that is if we want to keep arctic-alpine plants from disappearing, we should consider creating nature preserves. These would be most helpful in areas with varied landscape features that can offer similar refuge to plants that would otherwise have nowhere to go. That same strategy could also be used in other mountainous areas of the world, not just in the Arctic.

We can think of these preserves as serving a purpose akin to the famous Svalbard Global Seed Vault.

"Where do we want our national parks to be, where do we want to conserve the arctic-alpine flora for the future?" Alsos asks. She believes more answers can come from continued research using DNA as a tool to work out the effect of climate change on plants.

There is a particular urgency to that work, she says, "because climate change is taking place at a faster speed and higher amplitude than in the past."

And if the experience of native people living in the high north is any guide, the tundra is already changing as warming accelerates. As Aili Keskitalo, President of the Sámi Parliament of Norway, put it at the Arctic Frontiers conference:

"Our tundra is changing. It is growing trees where there should be none. Some time in the future we might no longer recognize our tree-less mountain plains anymore. The only memory we might have left is the word itself, tundra, tūndâr."

Feeding Seaweed to Cows Could Curb Their Methane-Laden Burps