A Deluge of Uncertainty About Natural Disasters and Climate Change 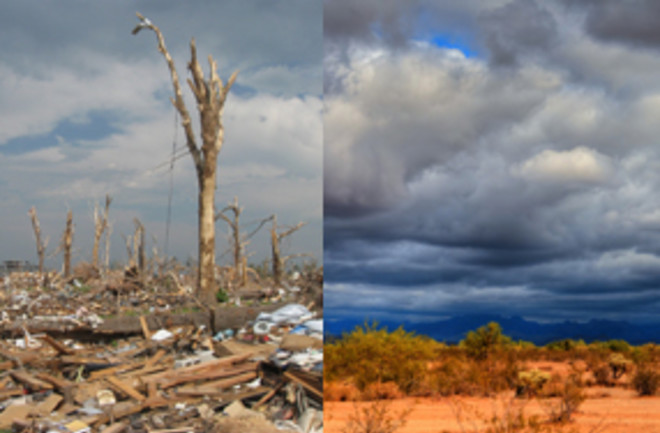 On May 21, 2011, a tornado ripped through Joplin, Mo. (Credit: Melissa Brandes/Shutterstock). A storm brews somewhere over the American Southwest (Credit: Paul B. Moore/Shutterstock). Associating natural disasters with climate change -- like some did last week with the massive tornado that touched down in Oklahoma -- is a distortion that has been rattling around for nearly a decade or longer. The most glaring example may be Al Gore’s portrayal of Hurricane Katrina in his 2006 film An Inconvenient Truth. According to Gore, the hurricane was the outcome of unchecked anthropogenic greenhouse gas emissions and a harbinger of what’s to come. But he was quickly called out for misrepresenting the science to gain support for his cause. And as the dust settled in Oklahoma, it became clear that 1) the situation sucked, and 2) the science is still out on whether or not there is a concrete connection between global warming and these monster storms. J. Marshall Shepherd, a climate change expert and professor at the University of Georgia was quoted in a May 22 CNN story as saying:

Trends in tornado occurrence over the last 50 years do not appear to have changed in conjunction with more greenhouse gases in the atmosphere and patterns of rising temperatures. … There is currently a much better understanding of how climate change increases the risks of droughts, heat waves and precipitation. There are also indications that changing patterns may influence the intensity of hurricanes. But as far as tornadoes: There's just not a lot of information. (“No evidence global warming spawned twister”)

Marshall was echoing a 2012 Intergovernmental Panel on Climate Changespecial report on managing the risks of extreme events, which notes that:

Monsoon flooding seeps into Varanasi, India. (Credit: Miguel Cabezón/Shutterstock) The science continues to trickle in, with several recent reports strengthening the possible connection between a warming planet and changing monsoon intensities. A study published yesterday in Proceedings of the National Academy of Sciences indicates that monsoon seasons in the Northern Hemisphere, including the rain that rehydrates the American Southwest during summer months, could intensify as global temperatures rise. Study co-author Yemane Asmerom, a professor of earth and planetary science at the University of New Mexico, explains:

A study published in the same journal in March looked at the relationship between temperature shifts in the Pacific Ocean and monsoon intensity in the Northern Hemisphere, finding that over the past 30 years, summer monsoons have intensified with warming. Discussing a June 2012 article in the journal Nature Climate Change, report co-author and University of Reading meteorology researcher Andrew Turner told New York Times reporter Vikas Bajaj:

It is generally accepted that climate warming brings about an intensification of the hydrological cycle and the so-called "rich get richer" mechanism. Because a warmer atmosphere is able to hold more moisture, the result is heavier bursts when it does rain. There are also longer dry spells between these events. (Such results have been shown in theory, in observations and in future projections of the [South Asian] monsoon using computer modeling.)

Observation Last year, monsoon floods displaced nearly 9 million people in India, 15 million in China, 11 million in Pakistan, and 6 million in Nigeria, according to a new report from the Swiss-based Internal Displacement Monitoring Centre. IDMC estimates that in 2012, 32.4 million people around the world lost their homes to natural disasters. The bulk of these were in Asia and Africa, but North Americans were not immune. And on the opposite side of the same coin: The summer of 2012 saw debilitating drought around the world, which was in part to blame for a rise in food prices. (Scientists made the link then between drier than normal conditions, including an anemic monsoon season in Asia, and climate change.)

Soil dries out in West Bengal, India (Credit: Marco Mega/Shutterstock). The tragedies compound as populations increase, people develop shorelines and rivers, and food supplies become more tenuous. When you are standing in the muck, or on the remains of your twister-demolished home, trying to figure out where you’ll go next, stemming any broader, potentially culpable climate crisis must seem like a pretty far-fetched and meaningless solution. Perhaps then you can find solace in a possible shift in political climate toward using the science to inform adaptation strategies and better prediction methods, rather than as a pawn in a highly polarizing debate on if and how to turn things around.