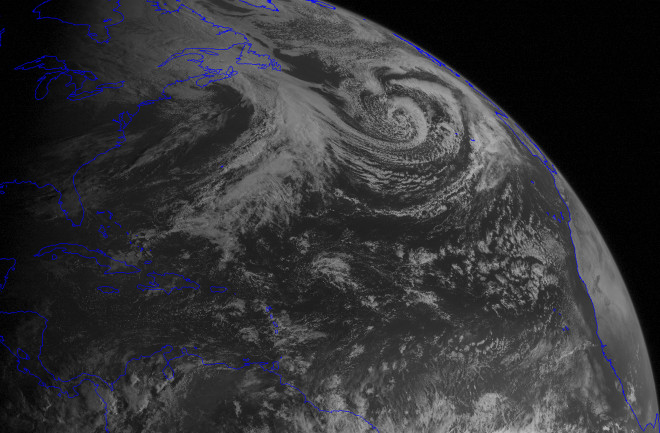 A GOES-13 image taken at 11:45 UTC on March 20 — the first day of spring in the Northern Hemisphere — captured a mid-latitude cyclone swirling in the North Atlantic. The original GOES image showed the full disk of the Earth; this is a closeup. (Image: Courtesy of the awesome CIMSS Satellite Blog) You may have seen a satellite image from NASA floating around the internet yesterday of the full disk of the Earth — a visual celebration of the vernal equinox. (The Washington Post, among others, ran it.) No mistake about it: The image, shot by the GOES-13 satellite on one of two days during the year when the axis of the Earth tilts neither toward or away from the sun, is very cool. But in addition to recording a special moment in time, the image contains a spectacular feature that seems to have escaped attention: a mid-latitude cyclone swirling in the North Atlantic. So I thought I'd post a close-up the GOES-13 image highlighting the cyclone. You can see it in the upper right quadrant of the image at the top of this post. I found it at the awesome Satellite Blog of the Cooperative Institute for Meteorological Satellite Studies, or CIMSS. Their image shows the fill disk, along with temperature readings stretching from the equator to both poles. Technically speaking, the cyclone is occluded, meaning that the cold front that is a normal part of a cyclone has overtaken its warm front. You can find technical details about occluded cyclones here. But before you head over there, make sure to click on the image for a larger version and check out the beautiful detail.