Using crop leftovers to make plastic without a carbon footprint. 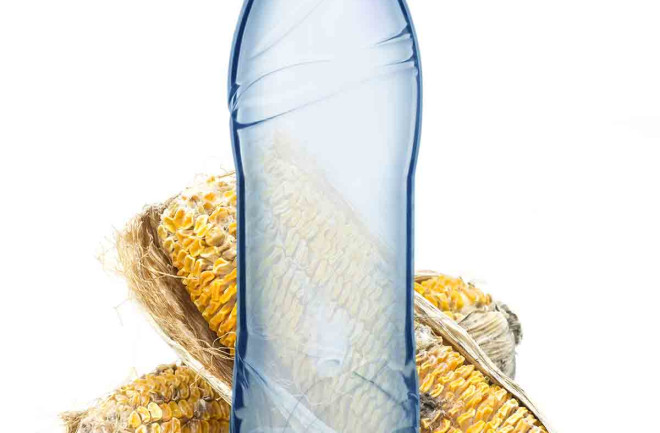 Recycling a plastic bottle may provide a fleeting sense of green philanthropy, but the process of making that bottle is still pretty eco-unfriendly. Now, chemists at Stanford University have developed a new plastic-making method that could leave no carbon footprint.

Most of the 270 billion plastic bottles used in the U.S. each year are derived from petroleum. And that manufacturing contributes to a global greenhouse gas hit of more than 200 million tons of carbon dioxide each year — the same amount about 150 coal power plants generate annually. Some plastics companies are attempting to cut that footprint by substituting corn-based sugar for petroleum. But planting, fertilizing and harvesting corn generates significant carbon emissions, too, says researcher Matt Kanan.

Instead of sugar, Kanan’s team developed a process that uses carbon dioxide and furfural, a compound derived from corn harvest waste. First, they converted furfural into furoic acid, a common food preservative. Next, they had to break the furoic acid’s strong hydrogen-carbon bond. Normally this requires an expensive base (the chemical opposite of an acid) that’s reactive and unstable — considerable hurdles to eco-friendly mass production. But the team discovered a workaround by heating the acid to 390 degrees Fahrenheit. At that temperature, carbonate (a weak, non-hazardous base) can break the hydrogen-carbon bond. So when they mixed the hot furoic acid, carbonate and CO2, the result was a compound that could be turned into plastic.

Another plus? This technique, published in the journal Nature, not only uses existing plant waste but consumes large amounts of CO2 and could be applied to other types of chemical manufacturing as well — a boon to our increasingly CO2-saturated atmosphere.

[This article originally appeared in print as "A Better Bottle."]