Most of these aren't even that hard. 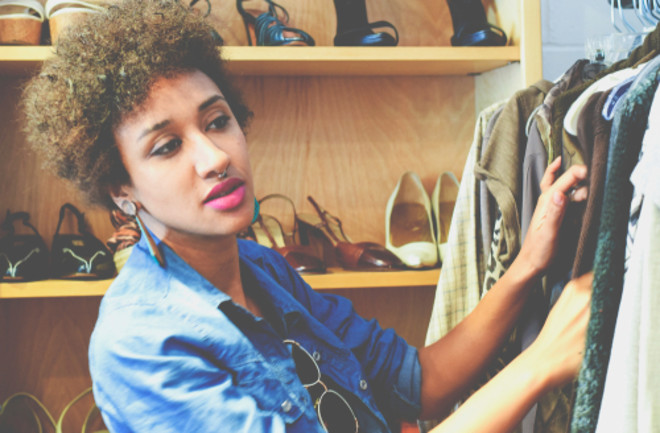 Buying clothes and other items second hand is a great way to cut your environmental impact. (Credit: Cabeca de Marmore/Shutterstock)

Helping the environment might seem like an impossible task, especially when there are a couple billion other people out there, still doing their thing. But even just cutting your current environmental impact a little is better than doing nothing at all. So, here are a few ideas to get you started.

What has less of an impact than buying the most sustainable new product on the market? Not buying it. Or anything new, for that matter. Any product that’s manufactured requires resources, energy, packaging and transportation. And that’s also true for products that are a “sustainable alternative” to something else.

But our world is already so full of stuff. It’s waiting for you in thrift stores. Second-hand shops. Yard sales. Used car lots. The back of your friend’s closet. In fact, the resale industry is booming: A report by First Research estimates the used merchandise industry in the U.S. hit $17.5 billion in 2019.

How many copies of Pride and Prejudice are in circulation right now? (Hint: It’s something like 20 million.) Do you really need one from Amazon that’s never been read?

But if you’re a material girl, living in a material world, and can’t imagine wearing someone else’s shoes — the least you can do is be sure to donate (or even resell) the stuff you’re done with instead of throwing it in the trash.

Cutting beef from your diet is a quick way to lower your carbon footprint. (Credit: SkyLynx/Shutterstock)

Trust me, I love bacon cheeseburgers as much as the next guy (possibly more). I won’t ask you to go totally vegan — no more meat, dairy or eggs as long as you live — but maybe cutting back a little, or a lot, wouldn’t kill you.

A 2018 report in Science found that 26 percent of all greenhouse gas emissions are from the food industry. Of that 26 percent, the beef industry is the worst offender — by an order of magnitude. To get 100 grams of protein (about two days’ worth for a single person) from beef causes, on average, the greenhouse gas equivalent of 100 pounds of CO2 and uses over 1,600 square feet of land per year. By comparison, the same amount of poultry-based protein releases just over 11 pounds of CO2 and uses 75 square feet of land, while protein from beans and nuts only releases five pounds of CO2.

Besides, lots of vegan foods can be good for you and good for the environment. How about switching to oatmeal for breakfast? Doesn’t sound so hard…

Learn How to Repair Stuff

If people could fix stuff that broke or ripped or showed signs of wear and tear, we wouldn’t throw as much stuff away or buy as much new. Repairing is always less energy intensive than replacing.

Have you ever heard of “darning” socks (cue “Eleanor Rigby”)? Yes, people used to actually sew up holes in their socks instead of throwing them away. Some basic sewing skills, and maybe even proficiency with a hammer and nail, can really go a long way when it comes to letting the stuff you already have live to see another day.

You might be surprised how easy it can be to make your own home cleaning products. (Credit: Geo-grafika/Shutterstock)

Learn How to Make Stuff

There are a ga-zillion products on the market that we could actually be making ourselves. Whether it’s packaging-intense meal kits, processed foods, home cleaners or even cosmetics — all of these have an impact from their production, packaging, transport and disposal that could be reduced if you just made them yourself.

The internet is full of recipes and DIY-everything, from toothpaste to acne treatments. Whether your passion is reducing your carbon footprint, cutting back on pollution or being extra cautious about chemicals in your household, making things yourself can be a great option.

A word of caution: Make sure you talk to your doctor or dentist before DIY-ing anything that might impact your health. For instance, a fluoride-free toothpaste might leave you — or your kids — with a mouthful of cavities.

This is rough for us with the #wanderlust bug. One round-trip flight from New York to London releases almost 4,000 pounds of CO­2 per passenger. That’s the carbon equivalent of 1,000 quarter pounders. Chicago to Hong Kong? Over 9,000 pounds of carbon. Ouch.

Maybe a local road trip isn’t such a bad vacation. Compare those international flights to a 300-mile road trip — say, 5 hours in the car. From Chicago, you could get to St. Louis, Detroit, Louisville or the Upper Peninsula of Michigan in that time. In a Honda Civic that gets, say, 35 mpg, it would take less than 20 gallons of gas to make the trip both ways — which releases less than 400 pounds of carbon.

As you cut back on beef, you might find yourself increasing your fish consumption a little. Girl’s gotta eat, you know? But when it comes to the environment, the seafood industry covers a huge spectrum from mostly sustainable to ecological nightmare.

Luckily, there’s an app for that. Folks at the Monterey Bay Aquarium have put together a guide called Seafood Watch that rates the best and worst seafood sources for every U.S. state. It spells out current evidence-based recommendations like: Eat U.S. farm-raised shrimp rather than imported or wild-caught. Eat clams and squid and farmed scallops. Albacore tuna is sometimes sustainable, depending on where and how it’s caught, but bluefin tuna is nearly always on the “Avoid” list.

Read More: 9 Things You Think Are Environmentally Friendly — But Aren’t

A super easy way to reduce the amount of trash you send to the landfill is to compost. Food waste like banana peels, coffee grounds, eggshells and that spinach you totally meant to eat but forgot about and now it smells funny … can decompose quickly and naturally if given the chance. If it’s sent to the landfill, though, it often gets mummified since it’s sealed away from oxygen and important decomposers — and the anaerobic bacteria that do eat it turn it into methane. Tons and tons of methane.

The United Nations estimated in 2011 that one third of all food is wasted world-wide. Worse, they found that if food waste were a country, it’d be the third-biggest emitter of greenhouse gases after China and the U.S.

You can buy a fancy bin for your yard and use the compost yourself; or, an increasing number of cities allow you to drop off your food scraps and they’ll compost them for you. A handful of cities — like San Francisco, Denver, Boulder, Portland and Seattle — will even pick up your food scraps curbside. Or, if you’re lazy like me, you might even be able to get away with finding a secluded corner of your yard and dumping food scraps there … as long as your landlord and neighbors don’t mind.

Unless you live somewhere where the tap water is actually unsafe, bottled water is a luxury with huge environmental impacts. Bottled water requires 2,000 times the energy of regular tap water to produce. Most of that comes from manufacturing the bottle itself, but depending on where it’s made and where it’s purchased by the consumer, that impact could more than double thanks to transportation costs.

Wherever life takes you, fill a reusable water bottle at home or at a drinking fountain. And if you must buy bottled water, be sure to recycle the bottle to keep it out of a landfill.

Not having kids may be the the single-biggest way to reduce your carbon footprint, however unrealistic that may be for many. (Credit: Michael Rosolia/Shutterstock)

You know who’s really good at not consuming new things? People who don’t exist. That’s right, if you have kids, your impact just increased exponentially, because you’re responsible for their consumption, and their trash, too. If I dare say it, the best way to reduce your impact is to have fewer kids. Or adopt existing children instead of having your own.