9 Eco Rules Humans Shouldn't Break If We Want to Survive 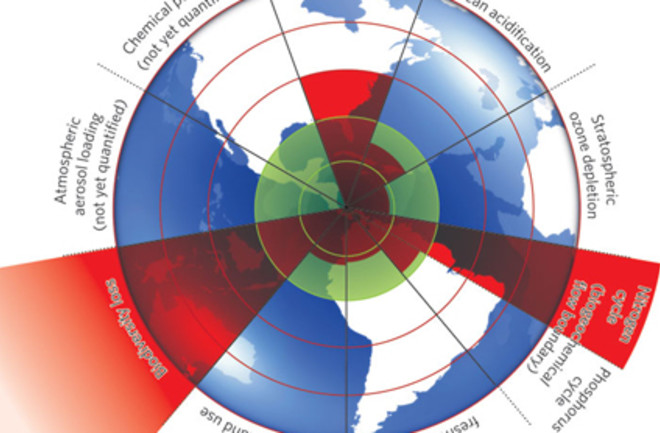 In an ambitious attempt to assess how humans are doing as stewards of planet earth, 28 leading scientists have drawn up a list of nine "planetary boundaries" that must not be crossed if we want to avoid drastically changing the global environment and imperiling our own existence. The only problem is, we've already crossed three of those thresholds. The paper, published in Nature (and available for free), aims to define a "safe operating space" for human life on the planet.

It’s a first-draft users’ manual for an era that scientists dub the “anthropocene,” in which nearly seven billion resource-hungry humans have come to dominate ecological change on Earth [Wired.com].

What follows is a list of the nine environmental factors, and how we're doing on living within each limit. 1) Atmospheric carbon dioxide, the main cause of global warming: Obviously, we have trouble with this one. The researchers say the CO2 limit is no more than 350 parts per million (p.p.m.) in the atmosphere, but we're already at 387 p.p.m. and rising. 2) Nitrogen and phosphorus pollution: This one is split. We're already over the limit with nitrogen, since

industrialized agriculture already has humanity pouring more chemicals into the land and oceans than the planet can process [Time].

On phosphorus, another chemical used in fertilizer, we're still below the limit. 3) Ozone: finally, some good news! The researchers say that

atmospheric levels of ultraviolet radiation-blocking ozone are safe, thanks to a 1987 ban on ozone-destroying chemicals [Wired.com].

4) Fresh water use: So far, we're beneath the threshold for water use, but if populations continue to boom we may soon be in trouble. One water expert even questions the threshold used in this paper, saying that it would

allow further degradation at such environmental disaster sites as the drying Aral Sea in Asia and seven major rivers, including the Colorado in the U.S., that no longer reach the sea [Scientific American].

5) Land use: We also haven't yet reached the point at which we'll have converted too much natural terrain, like forests and wetlands, to less biologically useful landscapes, like monocrop agricultural fields and cities. But again, population growth is a looming factor. 6) Biodiversity: Boy, did we screw this one up. Many biologists argue that the planet is in the midst of a sixth great extinction event because of human actions, and the report finds that we're way over the limit for species loss.

"Today the rate of extinction of species is estimated to be 100 to 1,000 times more than what could be considered natural," they report [Canwest News].

7) Ocean acidification: Again, we haven't crossed this threshold yet, but the carbon dioxide emitted by our industrialized societies is steadily being infused in the oceans, raising their acidity levels and making it harder for coral reefs to build skeletons and invertebrates to build shells.

According to recent surveys, the ocean is now acidifying 100 times faster than at any time during the past 20 million years [Yale Environment 360].

8) Chemical pollution: Human activity is spreading toxic materials like heavy metals and radioactive waste, and researchers believe these materials are causing genetic damage in all kinds of organisms. But scientists don't yet have enough info to establish a safe limit. 9) Atmospheric aerosols: Ditto with soot and other particles that cloud our atmosphere, causing smog and provoking heath problems in humans. Researchers believe that aerosols can have global-scale effects, but haven't yet agreed on a threshold. Image: Nature / Johan Rockström, et al. The green area represents the safe operating space for nine planetary systems. The red wedges represent an estimate of the current position for each variable.