20-pound chunks of ice falling on a sunny day? It's no urban myth. 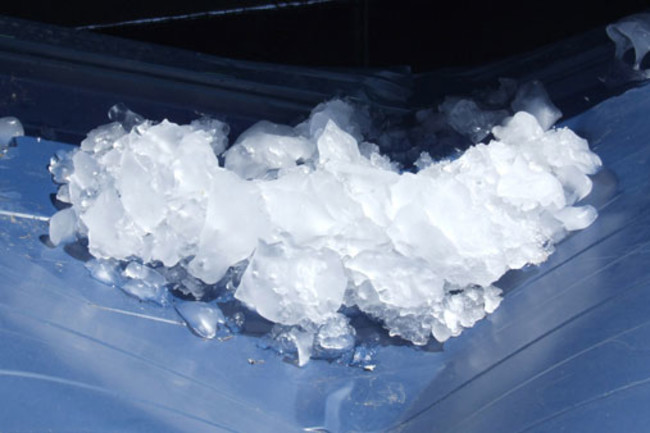 Remains of an ice meteor on a factory roof in Spain. | Photo Courtesy of Guardia Civil

Climate experts have long warned that global warming could bring an increase in extreme weather, such as hurricanes and drought. They never mentioned 20-pound chunks of ice falling from the clear blue sky, tearing through roofs, shattering windshields, and gouging impact craters. Yet reports of such “clear-sky ice fall events” have been on the rise worldwide in recent years, and in February Spanish researchers offered further evidence that the increase could be due to climate change.

Monster ice meteors, called megacryometeors, drop singly from cloudless skies and can weigh a couple hundred pounds. More than 50 such events have been reported globally in the past seven years alone, according to Jesús Martínez-Frías, a planetary geologist at the Center for Astrobiology in Madrid.

In the February study, Martínez-Frías and his group describe a 20-pound megacryometeor that crashed through the roof of an industrial warehouse east of Madrid on a clear morning in 2007. Like other mega­cryometeors, the ice chunk had a chemical and molecular composition identical to that of rainwater derived from the troposphere, the lowest layer of the atmosphere. Martínez-Frías believes that megacryometeors form when an ice crystal is driven repeatedly through cold water vapor by atmospheric turbulence, acquiring coat after coat of frozen water. He notes that both turbulence and water vapor concentrations have increased in the upper boundary of the troposphere due to climate change.

“We think it’s important to monitor these phenomena, not only because they can be a potential natural hazard for people and aviation, but because they may be signals of more serious environmental problems,” Martínez-Frías says.