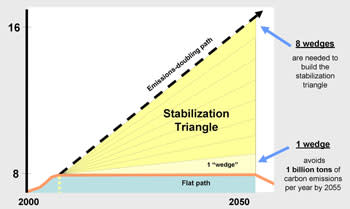 The "stabilization wedge" idea is a modular way of reducing carbon emissions.

Robert Socolow is a professor of Mechanical and Aerospace Engineering at Princeton University, where he focuses on global carbon management. He is the co-principal investigator of Princeton University's Carbon Mitigation Initiative (CMI). Under CMI, Princeton has launched new, coordinated research in environmental science, energy technology, geological engineering, and public policy.