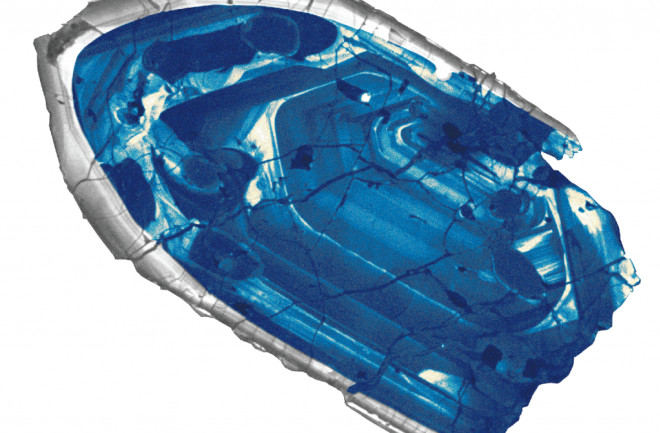 The zircon pictured here is now confirmed to be the oldest bit of the Earth's crust. Image courtesy of John W. Valley/University of Wisconsin-Madison. We all know Earth is a pretty cool place, but it’s been cool longer than previously thought. Using two dating techniques, scientists have confirmed that a tiny zircon, a mineral belonging to the group of neosilicates, from Western Australia's Jack Hills region is indeed the oldest fragment of Earth’s crust, dating back 4.4 billion years. The findings, from a team of researchers led by University of Wisconsin-Madison geoscience Professor John Valley, strengthen Valley's theory that the infant planet was cool enough to support oceans and perhaps microbial life just 160 million years after the formation of the solar system.

Thirteen years ago, Valley’s team dated the Jack Hills zircon crystal by analyzing how much of the element uranium decayed into lead within the crystal’s structure. Valley’s team calculated that the zircon crystal — about the width of two human hairs— was 4.4 billion years old. However, other researchers thought the team’s dating technique could be flawed. They hypothesized that lead atoms moved around inside the crystal, which could lead to an older age measurement. The latest findings show the team correctly dated the ancient crystal. To confirm they had the date right all along, Valley’s team used a technique called atom-probe tomography, which deduces the lateral location of atoms. Using this technique, they identified individual lead atoms that were clustered together in the crystal, determined their mass, and confirmed the zircon was 4.4 billion years old. They published their findings this week in the journal Nature Geoscience. “The zircon formed 4.4 billion years ago, and at 3.4 billion years, all the lead that existed at that time was concentrated in these hotspots,” Valley said in a news release from UW-Madison. “This allows us to read a new page of the thermal history recorded by these tiny zircon time capsules.”

About 4.5 billion years ago, a Mars-sized object smacked into early Earth, turning our planet into an inhospitable, molten red sphere and providing the raw material for our moon. Valley’s zircon crystals formed just tens of millions of years after the collision, which means Earth’s crust formed during the first geologic eon of the planet, making it possible for life to take root earlier than previously thought. "We have no evidence that life existed then. We have no evidence that it didn't. But there is no reason why life could not have existed on Earth 4.3 billion years ago," Valley told the Chicago Tribune. The zircon crystal will help scientists close the gap on the part of Earth’s earliest history that is not widely preserved. It could also help researchers understand how other habitable planets formed.

A timeline of the history of our planet places the formation of the Jack Hills zircon and a "cool early Earth" at 4.4 billion years.Timline courtesy of Andree Valley/University of Wisconsin-Madison.