40 Years After the Cuyahoga Burned, Clevelanders Fish in It 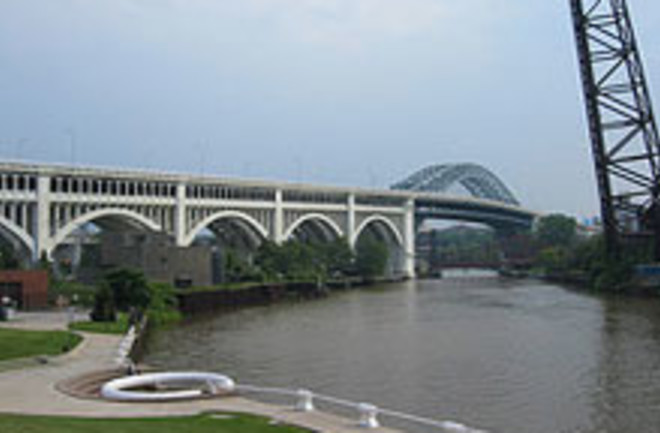 Cleveland's Cuyahoga River caught on fire 40 years ago June 22 when oily garbage floating in it was ignited, probably by sparks from a passing train. In turn, the fire sparked the creation of environmental agencies such as the Environmental Protection Agency, along with passage of 1972's Clean Water Act. And the river, once a dumping ground for industrial waste and an icon for environmental disrepair, today supports more than 60 species of fish along with beavers and various bird species, and serves as an example of environmental restoration. The river's recovery is an inspirational account of how even the most putrid bodies of water could be cleaned up. Indeed, the first time [Cleveland resident] Gene Roberts fell into the Cuyahoga River, he worried he might die. The year was 1963, and the river was still an open sewer for industrial waste. Walking home, Mr. Roberts smelled so bad that his friends ran to stay upwind of him. Recently, Mr. Roberts returned to the river carrying his fly-fishing rod. In 20 minutes, he caught six smallmouth bass. “It’s a miracle,” said Mr. Roberts, 58. “The river has come back to life”

The 1969 fire, which lasted half an hour and caused about $50,000 in damages, wasn't the first time that the river went up in flames.

The Cuyahoga has come a long way from the waterway that a Cleveland mayor in the 1880s (Rensselaer R. Herrick) described as "a sewer that runs through the heart of the city." The Cuyahoga had burned as early as 1868 and several times more before a 1952 fire caused more than $1.5 million in damage [Cleveland Plain-Dealer].

Still, the 1969 fire was notable because by that time, experts had largely figured out how to prevent rivers from igniting. The conflagration helped the environmental movement gain momentum; in fact, in pushing for the Clean Water Act of 1972, former congressman Louis Stokes says

he successfully argued that "if you could clean up the Cuyahoga River, that would demonstrate to the rest of the nation that we could clean up any body of water" [USA Today].