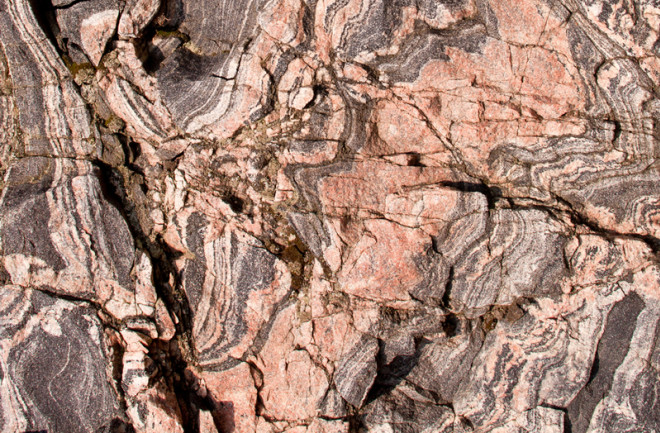 Outcrop of banded gneiss in the Canadian shield. Image courtesy of LesPalenik/Shutterstock Newly discovered water trapped more than a mile below ground in Canada could be billions of years old — and could hold clues both to Earth’s past climate and possible habitats for life on Mars. A research team reporting today in Nature has found pockets of subterranean water that could be as old as 2.64 billion years. The fluids are located 1.5 miles underground in a mine near Timmins, Ontario, in rock that is part of Canada’s Precambrian Shield, the oldest part of North America’s crust. The Timmins site is comprised of layers of volcanic and sedimentary deposits and is relatively undeformed by forces such as erosion or seismic activity, which factored into the water’s preservation. The amounts and types of gases — such as xenon — found in the ancient water reflect the atmospheric conditions at the time they were last exposed to surface air, potentially creating a kind of snapshot of what climactic conditions were like billions of years ago. The water is also as rich in hydrogen gas as hydrothermal vent environments, which are often home to unique and thriving ecosystems. The study's researchers suggest this may have made the underground environment conducive to life, though no evidence confirming their hypothesis has yet been found. Researchers studying the Timmins site note that Mars, too, is dominated by tectonically stable terrain, similar to Canada’s Precambrian Shield. They suggest similar ancient subterranean reservoirs may also exist on the Red Planet, and could be capable of harboring life. The researchers claim the discovery of the Timmins reservoir could cause scientists to rethink habitable zones on a planet, as well as what role isolated underground reservoirs may play in the preservation and evolution of life.