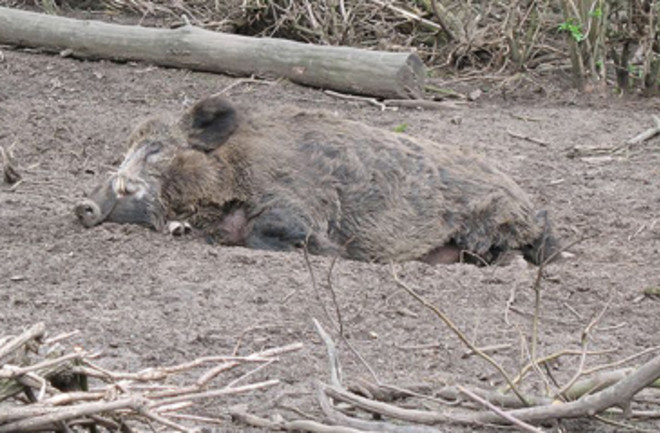 A quarter-century after the catastrophe, Chernobyl can't stay out of the news. When fires broke out in Russia this month, people worried that the flames would spread to areas still affected by the radiation, with unknown consequences. And this week, we learned that Chernobyl-related radiation is actually on the rise somewhere else: in German boars. Yes, that's right, boars.

Boars are among the species most susceptible to long-term consequences of the nuclear catastrophe 24 years ago. Unlike other wild game, boars often feed on mushrooms and truffles which tend to store radioactivity and they plow through the contaminated soil with their snouts, experts say [AP].

has a half-life of 30 years, and it has worked its way down into the soils of southern Germany to the depth at which it's drawn into truffles. Overall, the German government says, the radiation impact in that country from the 1986 Chernobyl disaster is actually on the downslope. But it so happens that the boar population is exploding, and so is the number of boars that hunters bring in with radiation counts too high for human consumption. Says Torsten Reinwald of the German Hunting Federation:

As Central Europe warms up, beech and oak trees overproduce seeds and farmers are growing more crops that the wild pigs eat.... "The number of boars in Germany has quadrupled or quintupled over the last years, as has the number of boars shot," Reinwald said [CBS News].

That growth isn't great for the bottom line of the German government, which pays hunters for the discarded meat when it's too radioactive to eat, hoping the financial reward will keep people from consuming it. The country's bill has grown more than tenfold in the last decade, up to more than $550,000 last year. Related Content: DISCOVER: Children of Chernobyl

DISCOVER: 20 of the Greatest Blunders in Science