2016 on track to smash record for warmest year globally

"No surprise here, planetary warming does not care about the election" 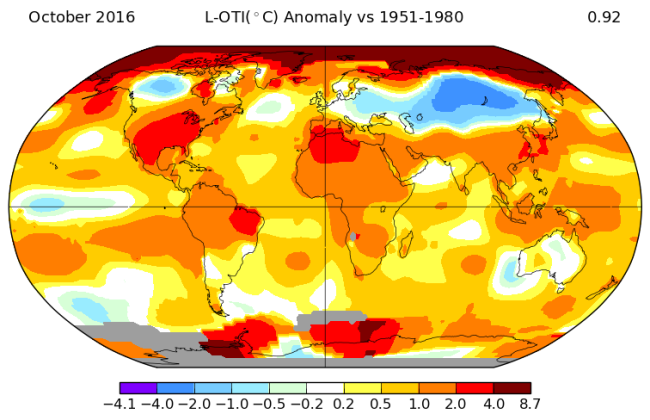 Here's how temperatures differed from average around the globe in October. Note the particularly intense warmth in the Arctic. (Source: NASA GISS) The heat streak continues, with October 2016 coming in as second warmest such month on record, according to the latest monthly update from NASA's Goddard Institute for Space Studies. Global average temperature during October 2016 was 1.6 degrees Fahrenheit (0.89 degrees Celsius), warmer than the 1951-1980 mean for the month. The three warmest Octobers on record have now occurred during the last three years. Looking at an even longer period, the top 10 October temperature anomalies all have occurred since 2000.

“We continue to stress that long-term trends are the important thing, much more so than monthly rankings,” said Gavin Schmidt, director of the Goddard institute, in a statement issued yesterday.

Here's that long-term trend, with Schmidt's prediction for 2016 overall — along with a little editorial comment about the recent election:  https://twitter.com/ClimateOfGavin/status/798590342039617536 It's looking almost certain that 2016 will beat 2015 for the distinction of warmest year globally, and by a significant margin. October's warmth was particularly intense in the Arctic, where temperatures reached 15 degrees Fahrenheit (8.7 degrees Celsius) above average for the month.

SEE ALSO: Dear President-Elect Trump: Climate change is not a hoax. Please consider this: It’s raining near the North Pole 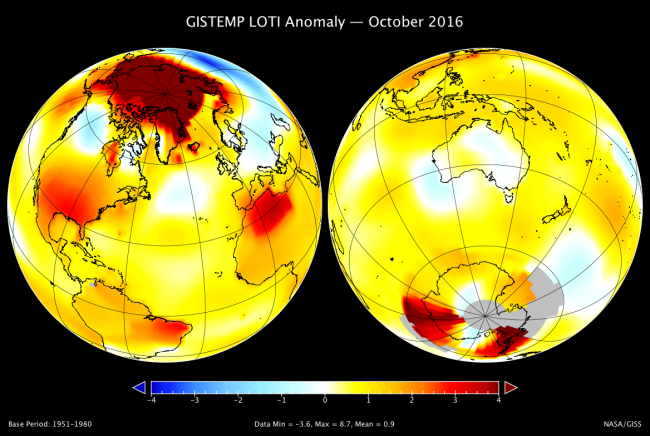 A map of temperature anomalies during October 2016 shows that the Arctic region was much warmer than the 1951-1980 mean. The United States and North Africa were also particularly warm. The largest area of cooler than average temperatures stretched across Russia. (Source: NASA GISS) Unusually warm conditions have persisted into November up in the Arctic, where sea ice also continues to trend at record low levels for this time of year. 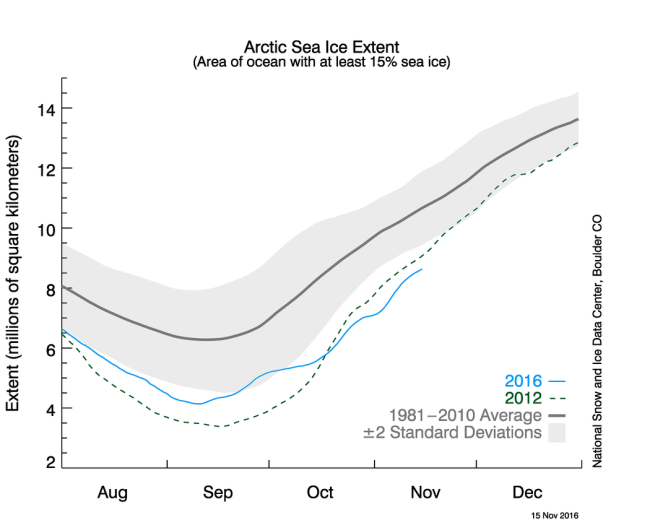 The growth of Arctic sea ice has been extremely sluggish during October and November of 2016. (Source: National Snow and Ice Data Center) With freeze-up progressing so slowly in the Arctic this year, it will be interesting to see how low sea ice might go next summer.

Planet EarthA Year in the Arctic: A Close-Up Look at the Biggest Ever Polar Expedition
Recommendations From Our Store