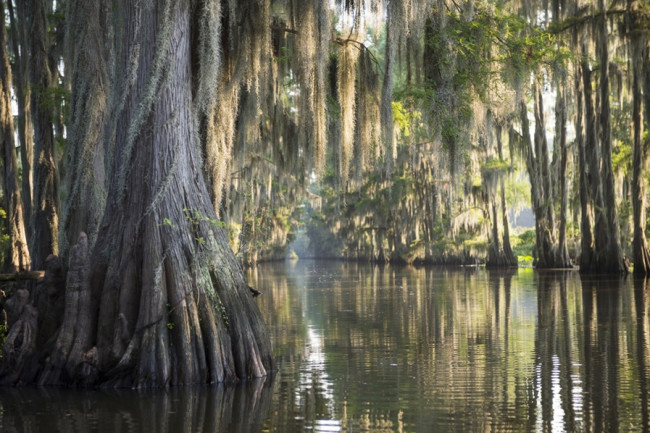 1. Is a swamp any swampier than, say, a marsh or mire? It depends. Some dictionaries and government agencies define swamps as forested.

2. Other institutions get less bogged down in the details and consider any soggy spot a swamp. The preferred general term by researchers, however, whether talking swamp, marsh or mire, is wetlands.

3. Wetlands, generally speaking, are any land where the water table is at or near the surface and the level of water saturation determines the flora and fauna that live there, as well as the substrate, or soil.

4. Most plants and animals not specifically adapted to live in wetlands don’t. The omnipresent water makes it too difficult for outsiders to thrive there.

5. Species native to wetland ecosystems can be rather enterprising. Many carnivorous plants evolved in swampy settings, adapting to eat insects and other critters because they couldn’t get needed nutrients from the substrate.

6. The English word swamp had evolved by the early 17th century, but its etymology is a quagmire. Similar words existed in several archaic Germanic languages, though some sources suggest it’s akin to the Greek word for spongy: somphos.

8. Swamps are also stars when it comes to carbon sequestration. Although wetlands comprise 5 to 8 percent of the planet’s land surface, they’re holding up to 30 percent of Earth’s stored carbon.

9. Fast-growing vegetation in wetland ecosystems captures the carbon. While some of it is released back into the atmosphere, most of the carbon remains in the swampy ground.

11. That’s the good news. The bad news is that wetlands are also responsible for up to a quarter of global methane emissions.

12. Overall, however, wetlands do much more good than harm for the planet. But many are under pressure from land development. The Great Dismal Swamp spanning the Virginia-North Carolina border, for example, is less than half as great in size than it was in the 18th century.

13. Once more than a million square acres, the Great Dismal Swamp started shrinking when a company co-founded by George Washington began draining and logging operations.

14. For decades, this boggy corner of the Atlantic Seaboard was a stop on the Underground Railroad, though for many it became a destination. Up to 50,000 African-Americans fleeing slavery settled in the swamp’s more remote areas.

15. Virginia’s Great Dismal Swamp has an evocative name, but Siberia’s Great Vasyugan Mire is a lot bigger. At more than 20,000 square miles, the mega-mire, which has no permanent human settlements, is nearly the size of West Virginia.

16. The Siberian swamp isn’t the largest on Earth, though. For that, you’ll have to travel to the Pantanal in Brazil, where 80 percent of its more than 55,000 square miles flood in the rainy season. Bring your boat shoes.

17. Of course, it’s much better to have a boat in a swamp than a swamped boat. Rogue waves — defined as unexpectedly large surface waves — are a rare but particularly dangerous swamping threat on open seas. The tallest such confidently measured wave was about 84 feet high.

18. A different sort of wall of water — a storm surge — swamped low-lying ground some 360 million years ago in what’s now Scotland. The rush of water washed ashore marine worms, microfossils of which were recently unearthed. It’s possible a surge also brought vertebrates onto land for the first time.

19. A pair of recent studies reconstructing the environment of our earliest terrestrial ancestors at the same Scottish site found they lived in a floodplain.

20. The studies’ analysis of sedimentary layers deposited with early terrestrial vertebrate fossils established that portions of our distant ancestors’ environment dried out seasonally, but year-round much of it was, yep, a swamp.

Planet EarthMuseums are Full of Forgotten Treasures. Here's How You Can Help Find Them
Recommendations From Our Store