20 Things You Didn't Know About ... Recycling 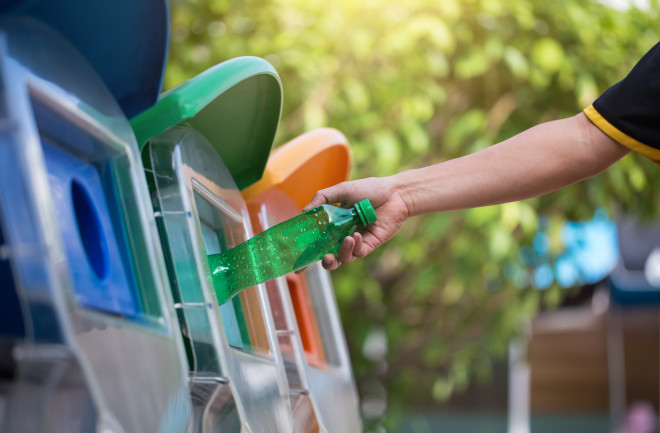 1. Drink up: It takes three months for a recycled aluminum can to make its way back onto the shelf in reincarnated form.

2. Or build a bridge: In 2002 researchers from Rutgers University built a 42-foot-long bridge over a river using plastic beams made from polystyrene cups and polyethylene milk jugs.

3. Or construct a boat: During World War I, enough metal was salvaged from corset stays to build two warships.

4. On April 27 the boat Earthrace will begin an attempt to break the maritime around-the-world speed record. It will use biofuel, some of which comes from liposuctioned human fat.

6. These boots were made for flooring: Nike gathers old athletic shoes and turns them into raw material for “sports surfaces” like tennis courts and running tracks.

9. Elsewhere in Asia, an enterprising dental technician established the Japan Denture Recycle Association in 2006 to cash in on the precious metals in discarded choppers. Proceeds go to Unicef.

10. Each year Americans junk more than 80 million dollars’ worth of copper, gold, silver, palladium, and platinum in the form of retired cell phones.

11. Cell phones, laptops, and, um, personal massage devices: New British laws mandate that old electronic appliances — including sex toys — cannot be dumped. They must be recycled with other so-called e-waste.

12. E-waste is for the birds: An Australian nut orchard converts the shells of vintage Macintosh computers into houses for pest-eating birds.

13. Humans need houses too: When Luiz Bispo built his house in a Rio de Janeiro slum out of construction waste last year, city authorities threatened to destroy it. Now the house — which floats atop a junk-filled river on a base of plastic bottles — is being touted as an icon of sustainable development.

14. Cities have long been gold mines for recyclers: Beginning in ancient times, tanners collected human urine to use in turning animal skins into leather.

15. In the Middle Ages, urine was also used to make saltpeter, an essential component of gunpowder.

16. Cities get recycled too: Masonry from Roman settlements made a handy source of stone for medieval church builders.

17. But enough is enough: In 1821 Turkish soldiers surrounded Greek forces holed up in the Parthenon and started stripping lead from temple columns to make bullets. The horrified Greeks promptly sent the enemy a fresh supply of ammunition to discourage further recycling.

18. Using every part: There are now sheep-poo air fresheners. Sterilized sheep droppings are turned into packets stuffed with grass- or daffodil-scented material.

19. Green to the end: The Doggone Project in Mannheim, Germany, can recycle deceased pets into fertilizer.

20. You, too: Ecopods, a British company, sells stylish coffins made from hardened recycled paper, available in a range of colors including indigo and silver leaf.