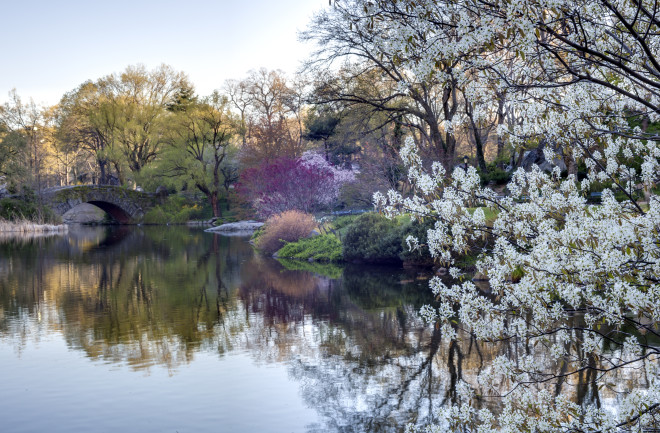 Depending on where you live, climate change can feel like it’s something happening elsewhere, if at all. Warmer temperatures and wilder weather is something that lies in the future, or that’s affecting people halfway around the globe (or at least in another state).

But new data is uncovering the subtle, but profound ways the climate is already changing everywhere, and the impacts aren’t all natural disasters and rising seas. Even in temperate inland areas where a couple degrees of warming might not sound so bad to a casual observer, changes to the climate are apparent, if you know where to look.

In a recent study in the Journal of Ecology, a team led by scientists at Portland State University reports noteworthy changes in plant phenology — the timing of events like leafing out and flowering — in New York state over the past 200 years. They found that spring has shifted, on average, three days earlier for each degree of warming (in Celsius). That adds up to flowers blooming more than 10 days earlier, and plants leafing out 19 days earlier today compared to the 19th century. Those insights come thanks to a combination of climate observations both old and new collected by volunteer citizen scientists.

The team reports the shifts were more extreme in urban areas than they were in rural places, and were worse for trees and shrubs than for herbaceous species. The researchers also saw a larger shift in insect-pollinated species than wind-pollinated ones. The research is a stark reminder that climate change is affecting environments everywhere — and that ordinary citizens have a role to play in helping to study it.

Citizen Science by Horse and Buggy

The dataset behind the new work is noteworthy in and of itself. The historical observations, collected from 1826 to 1872, were recently unearthed by New York ecologist Conrad Vispo, who works with the Hawthorne Valley Farmscape Ecology Program.

“[Vispo] found mention of temperature and phenology data in an old book one day and followed the tracks,” says Kerissa Fuccillo Battle, lead author on the study and founding director of Community Greenways Collaborative. “He combed archives and collected summary publications and was able to piece it all together with his team.”

The data was collected by over 500 observers at hundreds of sites across the state. The effort was organized by the New York State Regents, and in 1850 joined with the newly formed Smithsonian Institution's national network of meteorological observers — the precursor to the National Weather Service.

But Vispo realized the true value of these historical observations depended on having modern-day data to compare them to. So, he did the first thing that came to mind: He searched “phenology New York” online. That led Vispo to the New York Phenology Project, an affiliate of the USA-National Phenology Network that Fuccillo Battle launched in 2012.

“When he called me and told me that this [historical] dataset existed, it was exciting, even miraculous,” says Fuccillo Battle. Even the protocols — the methods that observers used, the species they recorded and the type of data they collected — were a good match, she says. “These two very similar citizen science initiatives were separated by two centuries,” she says. “It was mind-blowing.”

It’s a reminder to citizen scientists today that they’re a part of a long-standing tradition, not a modern invention. “It’s startling to imagine that there was a network of observers doing this kind of work in the early part of the 19th century,” says Fuccillo Battle, “[maybe] collecting and compiling their data with horse and buggy.”

Two fewer weeks of winter in a place like New York might not sound so bad — snow haters might even be tempted to celebrate it. But shifts in phenology can have major downstream effects that change ecosystems and, in turn, impact local people. The timing of the changing seasons affects agriculture, tourism, public health (think: allergy seasons) and more, explains Fuccillo Battle.

For instance, if a food crop like peaches or apples flowers early, it’s at much higher risk from a late-season frost. Same goes for trees that might be important for bees, like red maple, which would have cascading effects on local pollinator populations, she says.

Luckily, awareness of these changes and their possible effects can help mitigate the damage. “On-the-ground knowledge of how plants and animals are responding to changes in climate allow for better ecological forecasting and preparedness,” says Fuccillo Battle. “Phenology monitoring can help land managers make more informed decisions for conservation, recreation and economic purposes.”

This type of work is only possible with the help of citizen scientists — volunteers who make observations wherever they are and share them with researchers like Fuccillo Battle.

“This study allows us to see this unique history come full circle, and to deeply appreciate the multitude of observers, both past and present who made this possible,” she says.

No matter where you are, you can help experts track phenological changes over time. It’s something that’s valuable not just for researchers and the environment, but for your own sake. “People tracking phenology where they live connects them to their landscape in a way that can be personally rewarding on many levels,” says Fuccillo Battle. “The volunteer observers of today are building the datasets needed for the future to track the mechanisms and consequences of climate change.”

To participate, all you have to do is find a project that’s tracking phenology in your area, sign up and start logging observations. Visit ScienceNearMe.org and enter your location to get started. Science Near Me is a free resource to help you find opportunities to engage in all types of science events, projects and programs near you, in person and online. Its citizen science projects come from partner SciStarter.org, which organizes thousands of citizen science projects from across the internet!

Take part: Find a phenology citizen science project near you

“These observers are the eyes on the ground and can cover large geographic regions, gathering data at an unprecedented rate,” she says. “It’d be impossible for scientists alone.”