10 Billion Tons of Meltwater Poured Off Greenland in a Day — But are Things as Bad as the Twittersphere Says?

Comparison of satellite images of the western edge of the Greenland Ice Sheet about 250 miles across, one acquired in 2018 on July 30, and the other on July 31 of this year. Vastly expanded areas of blue in this year’s image are indicative of water at the surface. The gray area, known as the “ablation zone,” is where ice is exposed and experiencing melting. (Images: NASA Worldview. Animation: Tom Yulsman)

As forecast, the dome of heat that brutalized Western Europe has moved over Greenland, where it has triggered a massive spike in surface melting of snow and ice.

In coming days, the abnormal heat could also cause the Arctic’s floating lid of sea ice — which is already trending at record low levels for this time of year — to shrivel even further.

But if you pay attention to Twitter, it almost seems as if we’ve entered the Arctic Apocalypse. So with this story, I decided to take a deep breath and report as dispassionately as I could on what’s happening.

I started by getting in touch with Mark Serreze, Director of the National Snow and Ice Data Center — which among other things, publishes daily updates on surface melting of the Greenland Ice Sheet and the extent of Arctic sea ice. I asked him for his overall take on what’s happening. Here’s what he told me:

“There have always been what one could call ‘heat waves’ in the Arctic,” he said. That’s just part of the natural variability of weather.

But now that natural variability is happening atop the long-term trend of human-caused warming — which is manifesting more intensely in the Arctic than anywhere else on Earth. As a result, “the heat waves are becoming hotter,” Serreze says.

And make no mistake: This one is very toasty: Temperatures in Greenland have been running up to 30 degrees above average this week. At the highest point in Greenland, 10,551 feet above sea level, temperatures remained above freezing for 11 hours on Tuesday — an exceedingly unusual occurrence.

As a result, the extent of surface melting is equal to an area nearly one and a half times the size of Texas.

That’s concerning enough. But there’s also a possibility that the “ablation rate” — meaning the rate at which ice actually melts — could hit a record today (July 31).

That said, when it comes to the percentage of Greenland’s surface that has experienced melting so far, this is how things looked yesterday compared to the record-setting year of 2012: 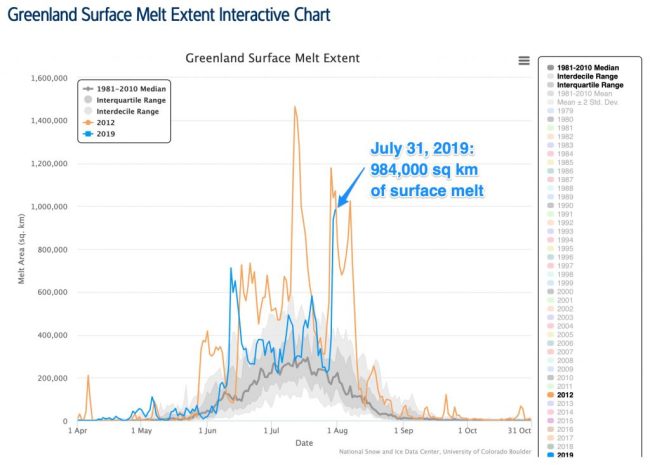 The extent of surface melting in Greenland began to spike on July 29, 2019. By July 31, it had covered 984,000 square kilometers, an area nearly one and a half times larger than Texas. (Credit: National Snow and Ice Data Center)

No question, that spike is pretty tall. And as of yesterday — the biggest melt day so far — 56 percent of Greenland’s surface experienced detectable surface melting. That was enough to turn more than 10 billion tons of ice into water, which will contribute to sea level rise when it reaches the ocean. 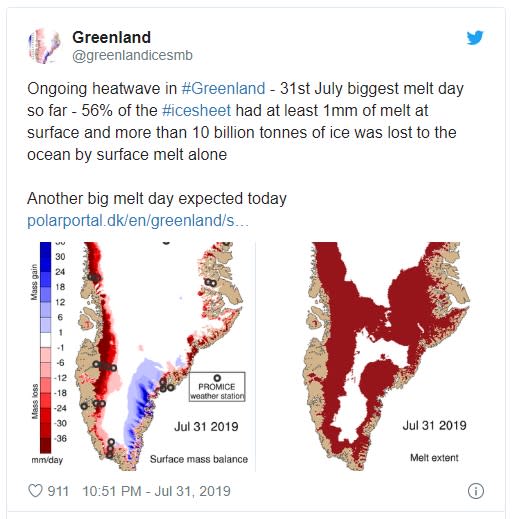 But to keep things in proper perspective, consider that during the record-setting year of 2012, something like 97 percent of Greenland’s ice sheet experienced surface melting.

The evolution of surface melting of ice and snow in Greenland between July 28th and 31st, 2019. (Maps: National Snow and Ice Data Center. Animation: Tom Yulsman)

I don’t mean to minimize what’s happening in Greenland. It is quite concerning — as this video further dramatizes: 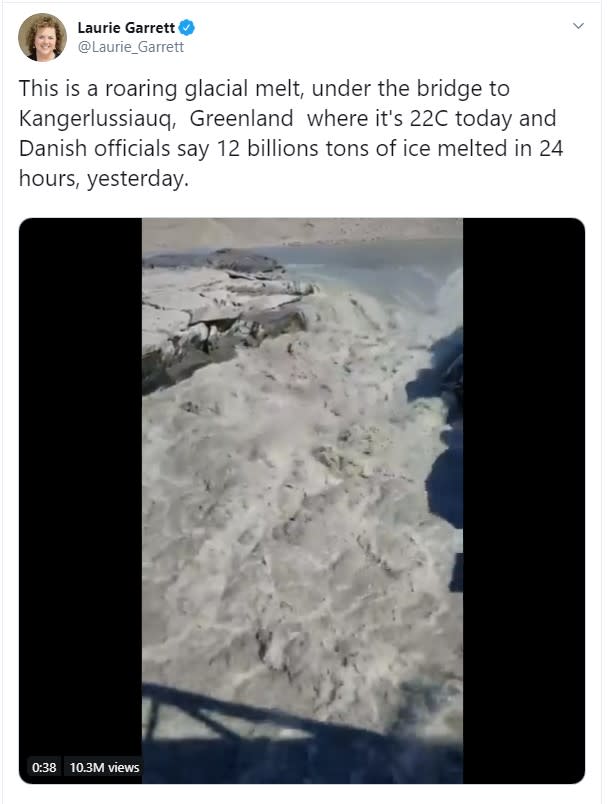 But in his answers to my questions, Mark Serreze came back more than once to a broader perspective:

If you look at temperature records for the Arctic, what you see is natural climate variability superposed upon the general warming trend.  Given that there is a lot of natural variability, I guess I’m not all that surprised. The last few summers have been somewhat cool, so we were due for a warm one. And here we are.

With this in mind, we shouldn’t be surprised when — not if — natural variability causes things to settle down a bit. It’s just that this settling down will be to a much warmer new “normal” than prevailed in the past. And that alleged “normal” won’t last. That’s because of the long-term trend of human-caused warming.

Back to what’s happening right now: Greenland isn’t alone in experiencing the effects of particularly warm temperatures. Sea ice in the Arctic has been suffering all summer, and lately it has been trending at record lows: 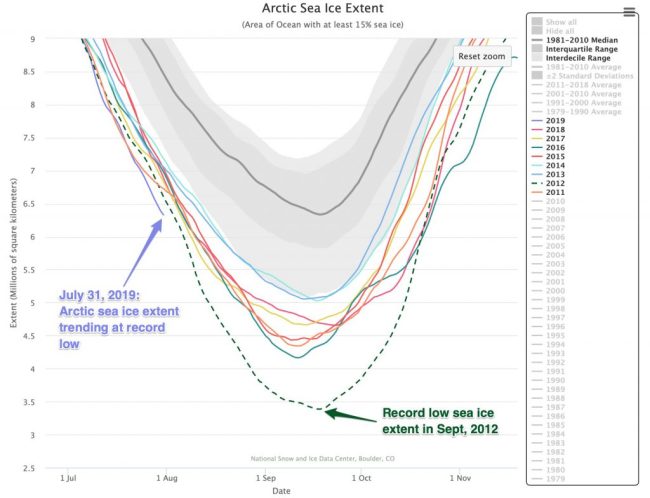 The extent of the Arctic’s floating cover of sea ice has recently been trending at record low levels. The lowest extent observed during the satellite measurement era occurred in September of 2012. (Credit: National Snow and Ice Data Center)

As the graph above shows, the geographic extent of the sea ice coverage in the Arctic is lower at this time of year than ever before in the modern record of satellite observations, which dates back to 1979.

Satellite images acquired on July 19 and July 31 of this year reveal a widening opening in the sea ice just off the northern coast of Greenland.

I created the animation above using satellite images showing northern Greenland. The first, acquired on July 19, shows a large crack in the sea ice opening up along the coast. Compare that with the second image, captured yesterday.

The crack has turned into a chasm.

This part of the Arctic seems to have become more vulnerable to melting, according to Serreze. “This is a very recent phenomena. From what we can see, it’s at least partly an expression of the ice becoming thinner, so areas that didn’t use to melt in summer out are now starting to,” he explains. “Also, winds play a role, because winds move the ice around.  I suspect it’s a combination of these two things.”

Wind could be a big factor in driving further declines in sea ice extent over the next few weeks, according to Steven Cavallo, an associate professor of meteorology at the University of Oklahoma.

“The heating has helped reduce the sea ice thickness, making the sea ice more vulnerable to strong cyclones, should they occur,” he says. And unfortunately, that may well happen.

That’s due to a phenomenon called a “Tropopause Polar Vortex”. As Cavallo explains it:

TPVs are like surface cyclones, except they are located in the upper atmosphere about 25,000 feet above the ground.  They contain relatively cold, dry air and spend most of their lifetimes in the Arctic because any heating that could remove the cold air inside of them is too weak in high latitudes.

TPVs are important precursors to development of cyclones, and several have developed in the Arctic. “So they are supporting favorable conditions for cyclone development,” Cavallo says.

In an update released in mid-July, the National Snow and Ice Data Center said that as significant as sea ice losses had been so far, “projections suggest that a new record low extent is unlikely this year.”

Recent events may lead to a reassessment.

“We are starting to re-think our position on this,” says Mark Serreze. “The melt rate continues to be rapid. But a new record? It’s unclear, as much depends on the weather conditions through the remainder of summer.”

Serreze remains somewhat cautious about what September will bring: “My guess is that ice extent at the September minimum will be somewhere in the lowest five that we’ve observed, but where it sits in the record books remains to be seen.”

Given the heat and melting in Greenland, and the low extent of sea ice coverage, Cavallo summarizes his reaction this way: “It is certainly shaping up to be an interesting summer in the Arctic.”