Unpredictable and Magical: The Allure of the Dragonfly Swarm

Chris Goforth, the creator of the Dragonfly Swarm Project, discusses how citizen science has impacted the study of dragonfly behavior. 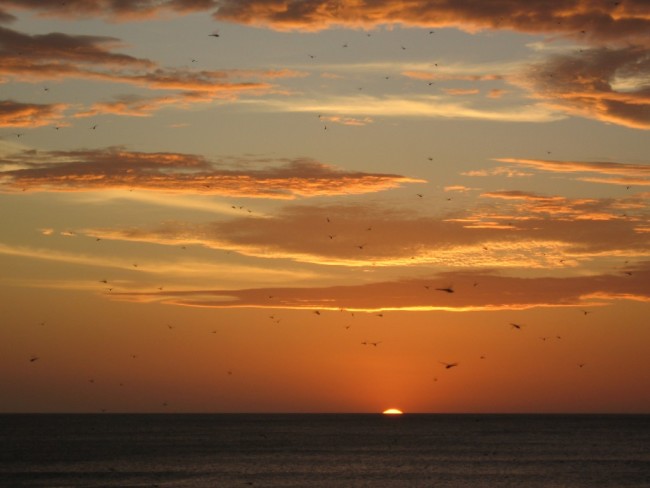 Dragonfly Swarm Sometimes science is hard. If you want to study something that happens slowly, is rare, or requires thousands of observations, it can take a lifetime to answer even the most basic questions. Thankfully, we live in the age of the internet, where information and willing helpers are readily available at the tap of a screen or a click of a mouse. The internet has revolutionized science as we know it and has allowed scientists to start answering some of those big or hard questions by inviting participation by citizen scientists. Citizen science today allows us to gather information on an unprecedented scale and is starting to shed light on difficult scientific problems by getting more people on the ground in more places than scientists could ever hope to reach on their own. Dragonfly swarms are one of those difficult problems to solve scientifically. Researchers have known for decades that you can occasionally find huge groups of dragonflies either flying over a well-defined area as they feed on small insects (what I call static feeding swarms) or moving from one area to another in large migratory swarms. However, both behaviors are rarely observed and unpredictable, which makes them incredibly difficult to study. Even if you actively look for swarms, you may only see a couple dozen over your entire life. (I’ve seen 11 so far, and that’s a LOT more than most people will ever see!) One person’s swarm observations are not enough to answer the larger questions about how and why they form or what role they play in the environment. Citizen science comes to the rescue! 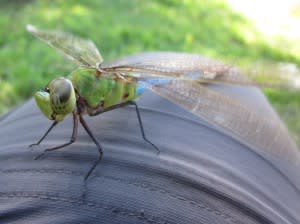 Anax junius In 2010, I created the Dragonfly Swarm Project as a way to answer some of those big questions about dragonfly swarming behaviors. By simply asking people who have seen swarms to share their stories with me, I have so far been able to gather over 3100 observations of this rarely observed behavior worldwide. With the help of my citizen scientists, many of whom have only seen a single swarm, I’ve gathered a huge amount of information about dragonfly swarming behaviors and have learned some interesting things. Static feeding swarms tend to form in areas where disturbances have occurred, such as exceptionally strong winds, severe thunderstorms, floods, or wildfires. When a disturbance moves through an area, millions of small insects become suddenly displaced. Other disturbances, such as floods, can increase the amount of breeding habitat for some insects, resulting in population explosions. In either case, you’ll see huge numbers of insects in abnormal places with dragonfly feeding swarms forming shortly afterwards. I believe that dragonfly swarms help restore the balance of nature after disturbances by controlling these surges in prey insect populations. Migratory swarms, in contrast, come in two types. There is a huge annual fall migration of dragonflies along major rivers and coastlines in North America where millions to billions of dragonflies fly from their summer habitats thousands of miles to warmer, more hospitable places for the winter. However, large groups of migratory dragonflies may also occur whenever conditions deteriorate in an area and thousands or millions of dragonflies suddenly move en masse to a better location. This sort of migration is much rarer and far less understood. My project will provide one of the first detailed descriptions of this behavior once I formally publish my results early next year. 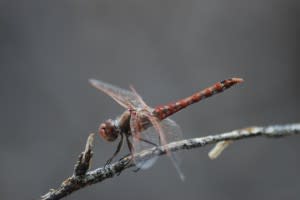 Sympetrum corruptum My citizen science project is different from many others because participants can’t just go out and collect data whenever they want. Instead, dragonfly swarms are something you just sort of happen upon. One thing is for certain, however: dragonfly swarms are something that fascinate people when they see one. Whether a person thinks the swarm is a magical experience, a sign of a coming apocalypse, or something in between, it’s something that many people want to learn more about. The best way to get people to participate in my project is to make information about swarms available online and ask for swarm reports from my readers. I house my project on my blog and write about it often, and people end up there when they search for “dragonfly swarm” online. I also posted my project on SciStarter a few weeks after I started formally collecting data and that boosted my participation significantly. I blogged about my project for SciStarter in 2011 and to this day it remains an excellent source of data for my project. Listing my project on SciStarter was an excellent early decision I made for my project and I highly recommend that all citizen science project owners do the same. We’re about to enter the peak swarm season in North America. You’re more likely to see a static feeding swarm or a migratory swarm in the next month than you will see any other time over the next year. If you see a swarm, I hope you will consider reporting it! The world knows more about dragonfly swarms than ever because people like you share your stories with scientists like me. Together, we can do amazing things, and make a little more sense out of our crazy and amazing world. Images: David Alexander (top); Chris Goforth (middle and bottom).

Chris Goforth is an aquatic entomologist and currently works as the Senior Manager of Citizen Science at the North Carolina Museum of Natural Sciences. Her jobs allows her to combine research, environmental education, and science communication in exciting ways and she witnesses the power of citizen science on a daily basis as she provides hands-on training and experiences in citizen science to Museum visitors throughout North Carolina and beyond.