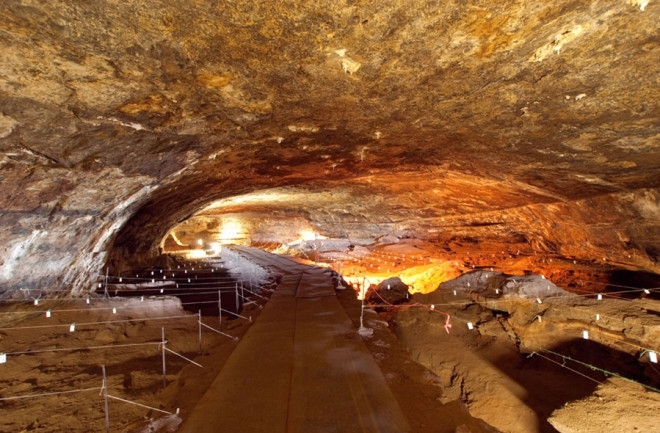 At the base of a brush-covered hill in South Africa’s Northern Cape province, a massive stone outcropping marks the entrance to one of humanity’s oldest known dwelling places. Humans and our apelike ancestors have lived in Wonderwerk Cave for 2 million years — most recently in the early 1900s, when a farm couple and their 14 children called it home. Wonderwerk holds another distinction as well: The cave contains the earliest solid evidence that our ancient human forebears (probably Homo erectus) were using fire.

Like many archaeological discoveries, this one was accidental. Researchers weren’t looking for signs of prehistoric fire; they were trying to determine the age of sediments in a section of the cave where other researchers had found primitive stone tools. In the process, the team unearthed what appeared to be the remains of campfires from a million years ago — 200,000 years older than any other firm evidence of human-controlled fire. Their findings also fanned the flames of a decade-old debate over the influence of fire, particularly cooking, on the evolution of our species’s relatively capacious brains.

At Wonderwerk, Boston University archaeologist Paul Goldberg — a specialist in soil micromorphology, or the small-scale study of sediments — dug chunks of compacted dirt from the old excavation area. He then dried them out and soaked them in a polyester resin so they would harden to a rocklike consistency. Once the blocks solidified, researchers sawed them into wafer-thin slices. The “eureka” moment came later, as the slices were examined under a microscope at Israel’s Weizmann Institute. “Holy cow!” Goldberg exclaimed. “There’s ashes in there!”

He and his colleagues saw carbonized leaf and twig fragments. Looking more closely, they identified burned bits of animal bones as well. The bones’ sharp edges, and the excellent preservation of the plant ash, indicated that neither wind nor rain had ushered in the burnt material. The burning clearly had occurred inside the cave.

Then team member Francesco Berna subjected the sample to a test called Fourier transform infrared microspectroscopy (FTIR), which analyzes a material’s composition by measuring the way it absorbs infrared waves. Often used in crime labs to identify traces of drugs and fibers, FTIR can also determine the temperature to which organic matter has been heated — and Berna is among the first to adapt it for archaeology. When he ran an FTIR analysis on one of the sediment slices, the sample’s infrared signature showed that the cave material had been heated to between 750 and 1,300 degrees Fahrenheit. That was just right for a small fire made of twigs and grasses.

At the site, researchers have found evidence of human-controlled fires in million-year-old layers of earth. Courtesy Michael Chazan

When the team announced its findings in April 2012, it added fuel to a controversy that’s been smoldering since 1999. That year, influential primatologist Richard Wrangham proposed a theory of human origins called the “cooking hypothesis.” Wrangham aimed to fill a gap in the story of how early hominins like Australopithecus — essentially, apes that walked upright — evolved into modern Homo sapiens. Evolutionary science shows that our distant progenitors became bipedal 6 million to 7 million years ago. Archaeologists believe early hominins evolved bigger brains as they walked, took up hunting and developed more complex social structures. That process led to the emergence of Homo habilis, the first creature generally regarded as human, 2.3 million years ago. Yet H. habilis’  brain was only moderately larger than Australopithecus’, and its body retained many apelike features. No one knows why, just 500,000 years later, a radically more advanced species — Homo erectus — emerged. Its brain was up to twice the size of its predecessor’s, its teeth were much smaller, and its body was quite similar to ours.

Wrangham credits the transformation to the harnessing of fire. Cooking food, he argues, allowed for easier chewing and digestion, making extra calories available to fuel energy-hungry brains. Firelight could ward off nighttime predators, allowing hominins to sleep on the ground, or in caves, instead of in trees. No longer needing huge choppers, heavy-duty guts or a branch swinger’s arms and shoulders, they could instead grow mega-craniums. The altered anatomy of H. erectus, Wrangham wrote, indicates that these beings, like us, were “creatures of flame.”

There was one major problem with this hypothesis, however: Proving it would require evidence of controlled fire from at least 1.8 million years ago, when the first H. erectus appeared.

The clues indicating early use of fire tend to be subtle; it’s easy to miss them, but it’s also easy to see them when they’re not really there. What looks like charring on a rock or bone, for example, often turns out to be staining from minerals or fungus. And high-tech analytic techniques don’t always banish the ambiguity.

A microscope image of sediment shows burned bone. Analysis revealed that the bone was burned at campfire temperatures, and not by wildfires or lightning. Courtesy Paul Goldberg

In recent decades, a number of sites have vied for the title of earliest human-controlled fire. At Koobi Fora and Chesowanja, both in Kenya, small patches of reddened soil were found in areas containing stone tools up to 1.5 million years old. To try to prove that Early Stone Age campfires caused the discoloration, researchers in the 1980s and ’90s used techniques such as magnetic susceptibility analysis and thermoluminescence dating. The first tool detects burned earth by gauging fluctuations in its magnetic field; the second determines how long ago an object was heated by measuring the photons it emits when baked in a lab. Although these methods showed that burning had occurred, the evidence is simply too sparse to convince most archaeologists that humans — not wildfires or lightning — were responsible.

Another promising site is a South African cave called Swartkrans, where archaeologists in the ’80s found burned bones in a section dating between 1 million and 1.5 million years ago. In 2004, Williams College chemist Anne Skinner analyzed the bones using electron spin resonance, which estimates the temperature to which an artifact has been heated by measuring molecular fragments called free radicals. She determined that the bones had reached at least 900 degrees — too hot for most wildfires, but consistent with a campfire. But since the cave has a gaping mouth and a downward-sloping floor, naysayers argue that the objects might have washed in later after being burned outside.

Until the Wonderwerk Cave find, Gesher Benot Ya’aqov, a lakeside site in Israel, was considered to have the oldest generally accepted evidence of human-controlled fire. There, a team of scientists found traces of numerous hearths dating to between 690,000 and 790,000 years ago. A wide range of clues made this site convincing, including isolated clusters of burned flint, as if toolmakers had been knapping hand axes by several firesides. The team also found fragments of burned fruit, grain and wood scattered about.

Then came Wonderwerk. The ash-filled sediment that Goldberg and Berna found came from a spot approximately 100 feet from the entrance to the tunnel-like cave, too far to have been swept in by the elements. The team also found circular chips of fractured stone known as pot-lid flakes — telltale signs of fire — in the same area. These clues turned up throughout the million-year-old layer of sediment, indicating that fires had burned repeatedly at the site.

Does that mean fire drove the evolution of H. erectus? Is the cooking hypothesis correct? The occupants who left these ashes at Wonderwerk lived nearly a million years after the emergence of H. erectus. Goldberg and Berna point out that it’s unclear whether the cave’s inhabitants knew how to start a fire from scratch or depended on flames harvested from grass fires outside the cave. If they were eating barbecue, it may have been only an occasional luxury. Whether that could have had an impact on human development remains an open question.

Finding the answers will require more digging. At Wonderwerk, team members plan to probe deeper, analyzing sediments up to 1.8 million years old, for evidence of fire. And they are using their cutting-edge detection methods at other early H. erectus sites as well. “If you don’t look, you’re not going to find it,” Goldberg says.