Smartphone-induced blindness: yup, it's a thing. 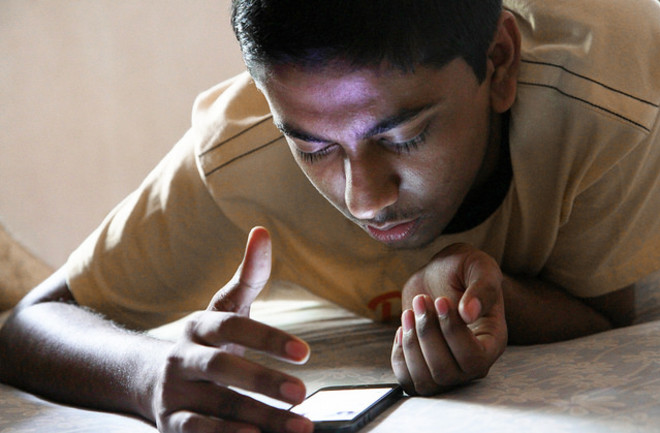 We've reported on several phone-related medical conditions, from "nomophobia" (fear of being out of cell phone contact) to the consequences of swallowing your phone, case and all. In this case study of two patients, doctors report yet another condition, which they call "transient smartphone blindness." TSB is caused by a combination of lying on your side while looking at your phone in a dark room. The result is temporary blindness in one eye "due to differential bleaching of photopigment, with the viewing eye becoming light-adapted while the eye blocked by the pillow was becoming dark-adapted. Subsequently, with both eyes uncovered in the dark, the light-adapted eye was perceived to be 'blind.'" Fortunately, the blindness only lasts for a few minutes -- though these patients' embarrassment at seeking extensive medical care because they looked at their phones in bed might last a bit longer.

Transient Smartphone “Blindness” "Transient monocular vision loss is a common clinical presentation, and the cause is not always thromboembolic.1 We present two cases in which careful history taking established a benign cause (for the case histories, see the Supplementary Appendix, available with the full text of this letter at NEJM.org). A 22-year-old woman presented with a several months’ history of recurrent impaired vision in the right eye that occurred at night. The results of ophthalmic and cardiovascular examinations were normal. Vitamin A levels and the results of magnetic resonance angiography, echocardiography, and a thrombophilia screening were also normal. The second case involved a 40-year-old woman who presented with a 6-month history of recurrent monocular visual impairment on waking, lasting up to 15 minutes. The results of investigations for a vascular cause were again normal. Aspirin therapy had been commenced. When the patients were seen in our neuro-ophthalmic clinic, detailed history taking revealed that symptoms occurred only after several minutes of viewing a smartphone screen, in the dark, while lying in bed (before going to sleep in the first case and after waking in the second). Both patients were asked to experiment and record their symptoms. They reported that the symptoms were always in the eye contralateral to the side on which the patient was lying. We hypothesized that the symptoms were due to differential bleaching of photopigment, with the viewing eye becoming light-adapted while the eye blocked by the pillow was becoming dark-adapted. Subsequently, with both eyes uncovered in the dark, the light-adapted eye was perceived to be “blind.” The discrepancy lasted several minutes, reflecting the time course of scotopic recovery after a bleach.2-4 In a study approved by a research ethics committee, two of the authors monocularly viewed a smartphone screen at arm’s length and quantified the time course of recovery of sensitivity in the dark both psychophysically and electrophysiologically (Figure 1). Visual sensitivity was appreciably reduced after smartphone viewing, taking several minutes to recover, and this reduction in sensitivity was measurable at the level of the retina (Figure 1B). Although most people view screens binocularly, people frequently use smartphones while lying down, when one eye can be inadvertently covered. Smartphones are now used nearly around the clock, and manufacturers are producing screens with increased brightness to offset background ambient luminance and thereby allow easy reading. Hence, presentations such as we describe are likely to become more frequent. Our cases show that detailed history taking and an understanding of retinal physiology can reassure both patient and doctor and can avoid unnecessary anxiety and costly investigations." Related content: Foot orgasm syndrome. Yup, it’s a thing.What happens when you swallow your cell phone, case and all?Nomophobia: the fear of being out of cell phone contact.