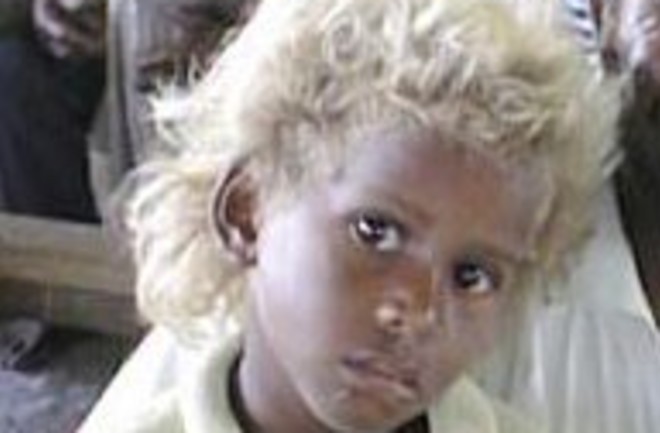 A reader emailed me asking about the genetics of hair color. Since I've discussed the topic before I simply pointed them to the query of the topic on my other blog. But, I thought it might be good to directly answer two specific questions:Why do many people have much lighter hair during childhood?The same reason that European babies are often with blue eyes or dark skinned babies are born with light skin, we get darker as we age (with the partial exception of females during puberty). The darkening of hair is simply a symptom of a general trend toward increased melanin as we age (or as women go through pregnancies). Proximately in an individual's life history it probably has hormonal upstream causes, e.g., the increased level of testosterone vs. estrogen levels in females after menopause (and pregnancies), or the elevation testosterone in males after puberty. Our ancestral state was probably "pink," but after we lost our fur humans developed dark skin (a "consensus sequence" is found among tropical peoples). Light skinned peoples are a response to the relaxation of this particular selection pressure, but the darkness is something that we develop (some of us more than others) over our lifetime as genes express proteins which lead to the phenotype.Also discuss the dependency and independency between hair and eye color, and hair and skin color.

Skin color and hair color are partly dependent. For example, the MC1R locus is loss of function, along with others, in red-haired individuals. These individuals tend to be very fair, and unable to tan. In Europeans blonde hair is also loss of function, but to a lesser extent, and so one may have dark skinned people with blonde hair. If you look at pictures of mixed-race Brazilians you will see individuals with brownish skin and dark blonde hair. But, I have never seen any individual with brown skin and bright ash blonde hair, suggesting to me that the full expression of blondness can only be exhibited by individuals who also carry a genetic configuration which renders impossible brown skin (or, conversely the loci responsible for a particular melanin production level in the skin guarantees a minimum level in the hair).1 - There is one important exception to this though: some populations of Australian Aboriginals, and perhaps Melanesians, exhibit blonde hair via a different genetic mechanism. These tribes tend to be concentrated in the center and west of the the nation. The late Australian anthropologist Joseph Birdsell studied these individuals and it seems that the pattern of phenotypic expression was dominant, insofar as hybrids between blonde Australians and brunette Europeans also produced blonde offspring. This suggests that this feature is not a convential loss of function, but might be a dominant gain of function mutation which blocks the production of melanin. These individuals have brown-black skin, so this is unrelated to complexion.1 - The link between eye color and skin color seems weaker (mostly on the OCA2 locus). I have met nearly black skinned African Americans with blue eyes. Never have I met black skinned African Americans with blonde hair.