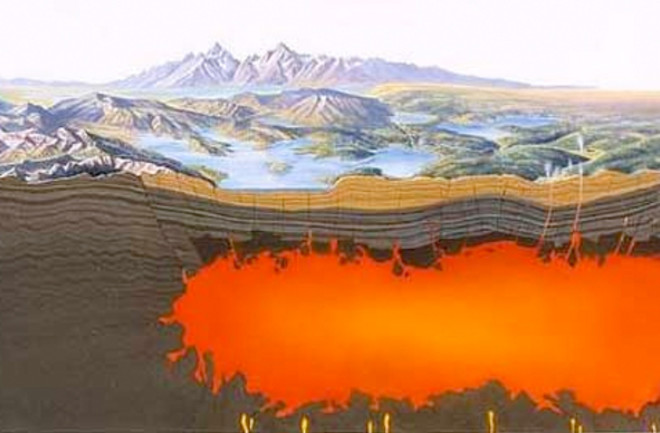 Artist's representation of the upper magma chamber below Yellowstone. Credit: National Parks Service The supervolcano that lies beneath Yellowstone National Park is one of the world’s largest active volcanoes. Though it hasn’t erupted in 640,000 years, a huge volume of liquid magma exists underneath its surface. And now scientists say that volume has been underestimated. New studies of the volcano reveal a deeper magma reservoir that holds more than four times the magma volume previously known.

The study is the first time the entire Yellowstone volcanic system has been imaged, and along with magma and heated rock, the reservoir holds the answer to a nagging question about the Yellowstone volcano: where was the rest of its magma? For years, geologists had known that there should be much more magma beneath the park than they could find. Carbon dioxide gas escapes from magma and partially molten rock as it heats, reaching the surface through geothermal features like geysers and hot springs. Yellowstone produces much more carbon dioxide than its previously known magma chamber could account for. Scientists also weren’t sure how the magma chamber in the upper crust connected to its heat source in the Earth’s mantle. They predicted that there must be a second reservoir sitting deep in the crust, between the shallow magma chamber and the top of the mantle. But they had no evidence of its existence and no idea what it would look like.

Using new seismic imaging methods, University of Utah geologist Hsin-Hua Huang and his co-authors found a second reservoir, extending from 28 miles below ground to 12 miles from the surface. The reservoir is larger than anyone expected, with a total volume of 11,200 cubic miles, about 4.5 times the size of the shallower chamber. The hot rock in the newly discovered, deeper magma reservoir would fill the Grand Canyon 11 times. Only about 2% of that volume is magma; the rest is solid rock that holds magma in its pores like a sponge. The magma is composed mostly of rock which melted at lower temperatures than the surrounding rock. In the upper chamber, about 10% of the volume is magma. From the top of the plume, geologists now think that magma rises twelve miles through a series of vertical cracks called dikes until it reaches the newly discovered reservoir. From the reservoir, it probably rises through another series of dikes to reach the upper chamber. They don’t yet know for sure, however.

To get a look at structures deep within the Earth, scientists measured seismic waves from earthquakes as they passed through the ground under Yellowstone, just like a CT scan produces images of a body by measuring how electromagnetic waves pass through different tissues. Seismic waves from local earthquakes are useful for imaging superficial structures, but looking deeper requires waves from distant earthquakes, courtesy of the large-scale EarthScope U.S. Array. Researchers combined the two datasets using a mathematical method which geologist Robert B. Smith says “takes the seismic data from global earthquakes around the world plus local earthquakes in Yellowstone, and merges the travel time information from those earthquake data to create these beautiful, really amazing three-dimensional images of this entire connected system.”

Although the discovery is new, the magma reservoir has always been there. It doesn’t change hazard predictions for the volcano, which put its odds of another catastrophic eruption, like the one that formed Yellowstone’s caldera, at about 1 in 730,000. And it was the previously known upper magma chamber that produced the three cataclysmic eruptions of the Yellowstone caldera 2 million, 1.2 million and 640,000 years ago. “We are careful to point out that our finding doesn’t all of a sudden make the Yellowstone volcano even bigger,” geologist Jamie Farrell said. “The fact is that this lower-crustal magma reservoir has always been there, but we are just now able to image it,” he said. Understanding the system better helps with long-term modelling and may help better understand other volcanic systems, say the researchers. Seismologists hope that the next step is to get even higher resolution images in order to better understand the smaller features of the volcano. “We really expect that some small structures, like the dikes, should exist to connect those reservoirs and the mantle plume,” said Huang. “These small structures are the remaining mystery that we want to pursue to see if we can resolve it.”