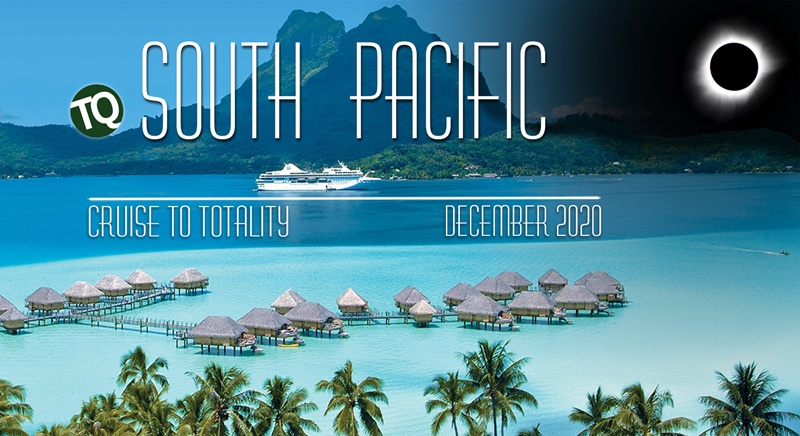 In our never-ending search for the best total solar eclipse experiences, TravelQuest journeys to the ends of the Earth. And if the eclipse track crosses over the 70 percent of our planet that’s covered in water, we’ll even charter a small, nimble ship that can get us exactly where we need to be: not that there’s ever just one viewing spot along the path of the Moon’s shadow. There will always be other places to observe the classic features of totality – the corona, Baily’s beads, the diamond rings and more – maybe even for a longer time. But for us, that’s not what defines a great eclipse journey. Especially when there’s a chance to witness a brief but extraordinary phenomenon you’d rarely experience anywhere else.

This was the inspiration behind our December 2020 adventure, South Pacific Cruise to Totality. Imagine waking before dawn and strolling out on deck just as the first glow of the Sun appears along the ocean’s distant edge. Above the glow, Venus is blazing away, heralding Sol’s imminent arrival. What you see next, though, is not the usual flaming disc but the oddest sunrise you may ever witness – a brilliant orb, emerging from the sea, with a bite taken out of it. Soon the rising Sun is in full eclipse, a fiery red ring around a disc of solid black. Totality is fleeting, just over half a minute, as you stand in silence – feeling the ship roll gently in the vast expanse of sea while you gaze, awe-struck, into the vast expanse of the heavens – the purity of those moments will stay with you forever.

At the heart of this once-in-a-lifetime trip is a simple concept: explore the crystal lagoons and jungle-covered peaks of remote Polynesian archipelagos, keeping one eye on the heavens while experiencing a spectacular taste of paradise right here on Earth.

On December 5, 2020, join us as we set sail for 15 days aboard our privately chartered cruise ship, the 330-passenger M/S Paul Gauguin – named for the post-Impressionist painter who traveled to French Polynesia at the turn of the 20th century and was inspired to create some of his most renowned masterpieces. In the same spirit of creative curiosity, you and a small group of TravelQuest guests will visit the Marquesas Islands and many of Gauguin’s other favorite haunts, discovering the rich culture and warm hospitality that have led so many travelers since to conclude that Polynesia offers the ultimate escape from the ordinary. And then on December 14, you’ll rise with the Sun to witness a spectacle that few will ever see – all the more memorable for being so fleeting.

The viewing point we’ve identified just north of the Marquesas will place us near the beginning of the eclipse track, with a strong likelihood of cloud-free skies, thanks to the high-pressure zones that typically linger in this region toward the end of the year. As dawn breaks, you’ll first see an oddly shaped Sun, already in partial eclipse, along the ocean’s perimeter. A short while later, after lengthy displays of Baily’s beads and the diamond ring, the Moon will cover the Sun’s face, its silhouette crowned with a pearl-white corona and ringed by the ruby-red chromosphere (which, in contrast to longer eclipses, will be visible for the duration of totality).

In the surrounding darkness, you’ll see Mercury shining brightly close by, and Venus a little higher above the horizon. After 38 seconds of chromosphere, prominences and coronal streamers – with time to shoot a sequence of magical photos – you’ll observe another long-lasting diamond ring and the wide arc of Baily’s beads as daylight returns. And because of the Sun’s low altitude relative to the horizon, you should have ideal views of the lunar shadow approaching and receding, and perhaps even a chance to watch shadow bands ripple across the ship’s white superstructure.

This is your opportunity to experience the ultimate in relaxation while discovering pristine tropical sanctuaries, fascinating Polynesian culture and the elusive beauty of a sunrise total eclipse at sea.

Our private cruise is bound to sell out, so make your stateroom selection today – and join us for an unforgettable adventure.