Who Were The Soviet Night Witches?

The deadly, all-female squadron of bombers were known as the Soviet Night Witches, and they flew thousands of combat missions during World War II. 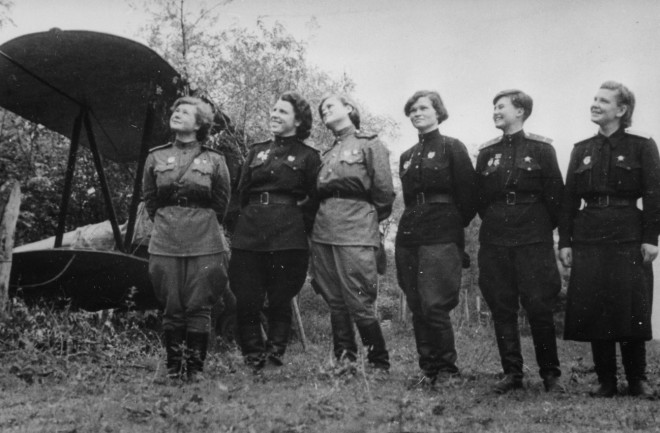 Soviet pilot Nina Raspopova knew her plane had been hit — anti-aircraft guns had blown away the bottom of the cockpit and her legs dangled over the open space. She was wounded and blood dripped down her limbs. Then, German searchlights targeting Raspopova’s plane blinded her. For a moment, she wasn’t sure which direction she was flying, though she knew she couldn’t crash in enemy territory.

In the distance, Raspopova saw a faint sparkle: the floodlight on her regiment’s runway. She directed the plane toward that direction and glided into neutral territory. After a rough landing, she walked with her navigator to a Soviet camp. Hours later, she sat on a bench and waited her turn for surgery.

That was in December 1942. Within months, Raspopova was back in the cockpit.

Raspopova and her co-pilot were members of the Soviet 588th Air Regiment, a deadly, all-female squadron of bombers during World War II. Their enemies dubbed them the Nächthexen, or Night Witches, and offered awards and honors to soldiers who shot them down. The women embraced the term, and it emboldened them to continue their dangerous and often deadly missions.

The regiment flew under the cover of darkness. Each night, a pilot and navigator looked for small fires or other flickering lights that gave away enemy camps. Then they’d throttle their engine to idle, quietly glide over the target and drop their bombs. The Germans soon feared these stealth flyers when they bedded down each night; something as small as the spark from a match could betray their position to the planes lurking quietly above.

The 588th flew Polikarpov-2 (Po-2) planes. Counterintuitively, the plane was “ridiculously slow,” which actually made it difficult for fast-flying German planes to take aim and land a direct hit. The open-air craft flew at 93 miles per hour, and the experience was apparently like driving in a convertible on a cold winter’s day.

Although the Po-2 allowed the Night Witches to creep quietly over their target, the plane had some major disadvantages: For one, its slow speed made it an easy target for anti-aircraft guns below. And it was made of wood and canvas, easily bursting into flames when hit by enemy gunfire. When Raspopova’s plane was struck in late 1942, the fuel tank took a direct hit, spraying her and the navigator. She had feared a spark would set them ablaze, as she’d witnessed happen to other flyers.

Another problem: The Po-2 could only carry 2,000 pounds of explosives at once. This meant flyers had to run multiple combat missions each night. A typical pilot in the 588th flew 800 missions during the war. Together, the regiment flew more than 24,000 combat missions, with the most occurring on December 22, 1944. That night alone, they flew 324 bombing runs.

The constant back and forth to enemy territory meant most pilots and navigators spent 10 hours in the air nightly, and the women returned feeling physically and mentally exhausted. Raspopova reported always feeling dreadful before a mission and fearful while she flew. Although their efforts were crucial for helping to upset the Germans, it upset them as well; the sheer amount of time they spent in the air made them more vulnerable to attack and, until the summer of 1944, they didn’t even have parachutes if they needed to bail.

The 588th was one of three regiments formed in October 1941 after a famed female pilot urged Soviet leader Joseph Stalin to allow her to create an all-female air group. Germany had invaded the Soviet Union just months before, and Stalin quickly agreed.

Whereas the 588th flew night bombing missions and became the most famous of the three regiments, the 586th was more defensive and provided air cover for advancing troops. They also harassed the enemy whenever possible. The 587th flew twin-engine Pe-2 dive bombers.

It’s not certain how many women pilots were lost on the Soviet side during the war. One estimate puts the fraction as high as one-third. As for the 588th, Raspopova had around 200 fellow members — and it’s thought that 30 were lost. On July 31, 1943, the regiment had their greatest loss when four crews were killed in action.

Rest assured their efforts were celebrated at the time, and many received the high honor of “Hero of the Soviet Union.” Although their stories have been widely told in Russia, however, most English-language books and articles ignored this part of history. In the past few decades, more historians have taken an interest in telling the daring accounts of the flyers who came out at night to wreak havoc on their enemy below.