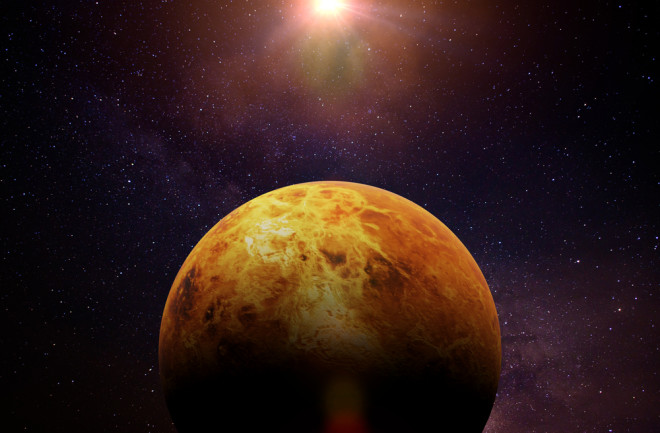 Sometimes called Earth’s “sister planet” because it’s a similar size with a similar iron core, molten mantle and rocky crust, there’s evidence that Venus was once a watery world like ours, and maybe even had life (or maybe not). But now it’s a 900-degree Fahrenheit hellscape in an atmosphere choked by carbon dioxide and sulfuric acid.

Scientists are really curious how it got that way, and whether it has anything to do with the fact that the volcanic plains covering most of the surface are relatively unblemished by impact craters, as if they were laid down only a few hundred million years ago. And since volcanoes are typically connected to tectonic activity, scientists are pretty keen on figuring out how the latter worked on Venus — or perhaps still works.

Now, a new look at nearly 30-year-old images of Venus’ surface from the Magellan mission has revealed that Venus’ outer crust is broken up into a bunch of small, platelike pieces. They’re not quite tectonic plates like we know them on Earth, but they do hint that “Venus is a lot more dynamic and a lot more interesting than we might have thought a few decades ago.” says Paul Byrne, a planetary geologist at North Carolina State University and co-author of the study describing Venus’ fragmented crust. Planetary scientists are eager for new data from the upcoming VERITAS and EnVision missions to give them a better view of the planet and its geological activity.

A 1,100 km-wide, false-color radar view of Lavinia Planitia, one of the lowland regions on Venus where the lithosphere has fragmented into blocks (purple) delineated by belts of tectonic structures (yellow). (Credit: NC State University, based upon original NASA/JPL imagery.)

As if We Needed Another Reason Why Venus Is Weird

Earth’s crust is broken up into seven major and eight minor tectonic plates that are in constant motion relative to each other. The motion is driven, at least in part, by convection in the mantle. Internal heat flow in the mantle causes it to churn slowly, sort of like a lava lamp, and some of the churning motion gets transferred to the plates.

The prevailing view among planetary scientists since Magellan was that Venus’ crust behaves more like Mars’ — rigid and immobile — than Earth’s, and that it had been that way for at least the past half a billion years. But new analyses, including Byrne’s work, suggest that Venus, true to its penchant for being weird, behaves differently than either Mars or Earth (or at least it did millions of years ago).

Magellan’s radar mapped 98 percent of Venus’ surface between 1990 and 1992. The images show that the flat volcanic lowlands that cover over 80 percent of the planet are striped with ridges and grooves — evidence of geological pushing, pulling and scraping that must have happened sometime after the lava fields were laid down.

Byrne and co-workers noticed that the ridges seemed to outline distinct chunks. They identified 58 clearly defined crust blocks in lowlands all over the planet, the largest of which is about the size of Alaska. Some of the blocks appear connected. Laurent Montesi, a planetary geologist at the University of Maryland who was not involved with the study, says he wouldn’t be surprised if there was a network of them covering the whole planet.

When tectonic plates on Earth collide, one will get shoved under the other in a process called subduction. There’s no evidence of subduction on Venus, which is why it can’t truly be said to have tectonic plates. What it seems to have, Montesi says, are “rigid fragments in a sea of more mushy stuff that enables them to jostle around,” pushed by the internal motion of the mantle. When they bumped into each other, the blocks crumpled at the edges to raise up the ridges that encircle them.

The big question is whether Venus’ crust is still moving or if it stopped millions of years ago. The answer to that question will have major implications for scientists’ understanding of Venus’ evolution into the strange world we now know. Was it resurfaced more or less all at once by a big volcanic cataclysm a few hundred million years ago, or did a more gradual and maybe still ongoing series of smaller events shape the planet?

It’s really hard to answer questions like that without rock samples or seismic data, says Joann Stock, a structural geologist at Caltech and member of VERITAS’ science team. Unfortunately, there’s no technology yet that can weather the corrosive atmosphere and surface temperatures that it would take to put a rover on Venus, so scientists have to stick with what they can gather from orbiting spacecraft.

VERITAS, one of two Venus-bound missions that NASA approved this year (the other, DAVINCI+, will study the planet’s atmosphere), will use state-of-the art radar to create a high-definition 3D map of Venus’ surface and spectroscopy to analyze what it’s made of. It’s planned to launch in 2026.

Part of VERITAS’ mission is to look for clues about how recent the tectonic and volcanic activity on Venus is. “We have a feeling it's really young, but we don't have numbers for that yet,” says Stock. She says that the patterns Byrne and co-workers describe are “a great perspective of what we want to be looking for.

If they get lucky, VERITAS and EnVision might see evidence that the crust blocks have shifted in the years since Magellan orbited the planet. Considering the slow march of geologic time, a few decades might not be enough time to see a difference, so “It’s a shot in the dark,” says Montesi, but "you miss 100 percent of the shots you don’t take” so they have to at least try.

“It’s a really weird world next door,” says Byrne. “We have lots more to explore and this is going to be an exciting decade because we are going to get some answers to our questions.”