New research sheds light on the complex physics behind the Northern lights. 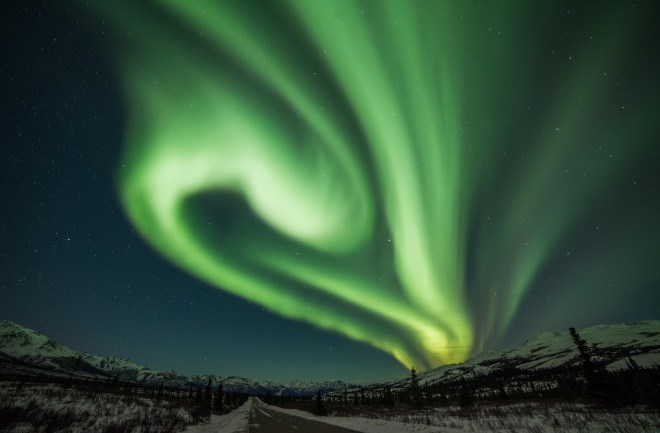 The auroral light shows that appear in the sky near Earth’s poles — aurora borealis in the North, aurora australis in the South — have captivated humans for centuries and contributed to mythology around the world.

We now know that auroras are caused by electrons and other charged particles from the sun being funneled by Earth’s magnetic field towards the poles, where they hit air molecules in Earth’s upper atmosphere at 45 million miles per hour. The energy from the collision causes the molecules to give off bursts of light. Put together the tiny bursts of light from a bunch of molecules — green and red from oxygen, blue and purple from nitrogen — and you get the shimmering colors of an aurora.

But researchers weren’t sure exactly how auroral electrons could be accelerated to the energy they were observed hitting the atmosphere with. Now, a group of physicists have answered that question with an experiment showing that aurora-causing electrons can accelerate towards Earth by “surfing” on plasma waves created by solar weather disturbing Earth’s magnetic field.

Our planet’s trusty magnetic field protects us from the harshest solar radiation by redirecting the bulk of it around and away from our planet. But space weather can still impact satellites, astronauts, and even Earth’s electrical grid. Auroras also appear much brighter during times of intense solar weather.

Coronal mass ejections or particularly strong gusts of solar wind can stretch the Earth’s magnetic field lines out behind the Earth until they snap back like a slingshot, creating ripples in the plasma called Alfvén waves (there are other ways to make Alfvén waves too but this is the type most relevant to auroras). As the waves travel towards Earth, the magnetic field gets stronger, and they speed up.

At some point, around 16,000 miles from Earth, the waves reach a magical speed where they’re going just a little bit faster than the electrons around them. Some of the electrons can then hitch a ride on the accelerating Alfvén wave.

Greg Howes, a physicist at the University of Iowa and one of the lead researchers on the study, compares it to a surfer catching a wave on the ocean. “You've got to almost match the speed of the wave going just a little bit slower. That's where you catch the wave and start surfing.”

Only the fraction of electrons that happen to be headed in the right direction at the right speed will catch the wave (for the rest, the wave simply passes them by).

At least, that was the idea. Though satellite observations of Alfvén waves and electrons in Earth’s magnetosphere were consistent with the concept of surfing electrons, nobody had actually proven that it was possible until recently.

The acceleration of auroral electrons by Alfven waves. (Credit: Austin Montelius, College of Liberal Arts and Sciences, University of Iowa)

“We know that that the electrons coming down and the waves often exist together,” says Jim Schroeder, a physicist at Wheaton College who worked with Howes on the experiment since he was a grad student at Iowa. “But there had never been a measurement showing that the waves can accelerate the electrons.”

Can Electrons Catch a Wave?

While satellite-based observations have plenty of merits, the researchers knew that they needed more controlled conditions to be able to see how the waves and electrons interact with each other. So, they turned to Earth-based experiments.

“We were able to really dial in and study a level of detail that you just you can't with a spacecraft that's moving,” says Schroeder. If the observing satellite were in a fixed position, like a buoy tethered to the ocean floor, it would be simple to watch the Alfvén waves and see if they were accelerating any electrons. But satellites don’t stay still; they’re in orbit, which adds up to simply too many moving pieces.

In the late 1990s, Craig Kletzing, one of Howes’ physics colleagues at the University of Iowa, struck up a collaboration with UCLA’s Basic Plasma Science Facility. His plan was to recreate the plasma conditions present in Earth’s magnetosphere, send some Alfvén waves through it, and see if some portion of the electrons picked up speed. “He initially thought it would take about three years,” says Howes. “It took more like 20.”

Every stage of the project presented a fresh technical challenge: how to send Alfvén waves through the 20-meter-long plasma chamber, how to scale everything so that it was proportional to what would happen in space, how to measure whether the electrons were accelerating, how to model the data. But ultimately, they succeeded in designing the experiment and showing that electrons can ride Alfvén waves.

Schroeder recalls being in the lab at UCLA late one night in 2018, plotting some of his data and seeing that it agreed with the surfing hypothesis. “I’d done enough theory that I sort of knew what it would look like if we had captured this process and seen the signal in our data, and it was there.” He immediately sent a photo of the plot to his brother, also a physicist — not a plasma physicist, but knowledgeable enough to look at the plot and understand that it was exciting.

“They were very nicely able to show with this experiment that this particular [electron-accelerating] mechanism has the characteristics needed to be able to explain what’s going on in the upper atmosphere and in space,” says David Schaffner, a physicist at Bryn Mawr College who was not involved with the research.

In the Eye of the Storm

Understanding what’s going on in space and how space weather affects Earth’s magnetosphere has more serious implications too. Radiation from solar flares can mess with power grids and telecommunications systems — a solar storm knocked out power to the entire province of Quebec in 1989 — and also poses safety hazards for astronauts and airplanes.

The better we understand how solar weather affects near-Earth space, the better we can predict and prepare for it. As Schaffner put it, “If you lived in the middle of the ocean, you’d want to know what’s going on with the currents.”

So the next time you see an aurora rippling across the night sky, in real life or on a screen, consider the surfing electrons and the space weather that makes them possible – and say thank you to the magnetosphere for making sure we don’t get scorched by solar winds.