3753 Cruithne: The 'Second Moon' You Didn't Know Earth Had

Cruithne is what’s called a quasi-orbital satellite of Earth or Earth's second moon. 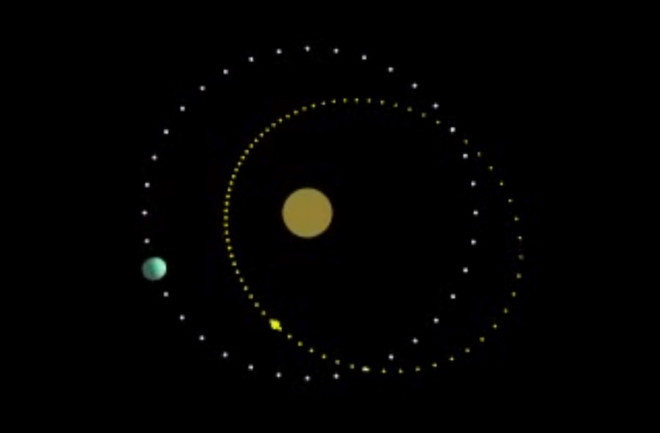 This article was originally published on March 2, 2015.

We all know and love the moon. We’re so assured that we only have one that we don’t even give it a specific name. It is the brightest object in the night sky, and amateur astronomers take great delight in mapping its craters and seas. To date, it is the only other heavenly body with human footprints.

What you might not know is that the moon is not the Earth’s only natural satellite. As recently as 1997, we discovered that another body, 3753 Cruithne, is what’s called a quasi-orbital satellite of Earth. This simply means that Cruithne doesn’t loop around the Earth in a nice ellipse in the same way as the moon, or indeed the artificial satellites we loft into orbit. Instead, Cruithne scuttles around the inner solar system in what’s called a “horseshoe” orbit.

To help understand why it’s called a horseshoe orbit, let’s imagine we’re looking down at the solar system, rotating at the same rate as the Earth goes round the sun. From our viewpoint, the Earth looks stationary. A body on a simple horseshoe orbit around the Earth moves toward it, then turns round and moves away. Once it’s moved so far away it’s approaching Earth from the other side, it turns around and moves away again.

Horseshoe orbits are actually quite common for moons in the solar system. Saturn has a couple of moons in this configuration, for instance. Likewise, we can see the same pattern on Earth's second moon.

More about the Moon:

What’s unique about Cruithne is how it wobbles and sways along its horseshoe. If you look at Cruithne’s motion in the solar system, it makes a messy ring around Earth’s orbit, swinging so wide that it comes into the neighborhood of both Venus and Mars. Cruithne orbits the sun about once a year, but it takes nearly 800 years to complete this messy ring shape around the Earth’s orbit.

How Big Is the Earth's Second Moon?

So Cruithne is our second moon. What’s it like there? Well, we don’t really know. It’s only about 5 kilometers across, which is not dissimilar to the dimensions of the comet 67P/Churyumov-Gerasimenko, which is currently playing host to the Rosetta orbiter and the Philae lander.

The surface gravity of 67P is very weak – walking at a spirited pace is probably enough to send you strolling into the wider cosmos. This is why it was so crucial that Philae was able to use its harpoons to tether itself to the surface, and why their failure meant that the lander bounced so far away from its landing site.

Given that Cruithne isn’t much more to us at this point than a few blurry pixels on an image, it’s safe to say that it sits firmly in the middling size range for non-planetary bodies in the solar system, and any human or machine explorers would face similar challenges as Rosetta and Philae did on 67P.

If Cruithne struck the Earth, though, that would be an extinction-level event, similar to what is believed to have occurred at the end of the Cretaceous period. Luckily it’s not going to hit us anytime soon – its orbit is tilted out of the plane of the solar system, and astrophysicists have shown using simulations that while it can come quite close, it is extremely unlikely to hit us. The point where it is predicted to get closest is about 2,750 years away.

Cruithne is expected to undergo a rather close encounter with Venus in about 8,000 years, however. There’s a good chance that that will put paid to our erstwhile spare moon, flinging it out of harm’s way, and out of the Terran family.

Does the Earth Have Other Moons?

The story doesn’t end there. Like a good foster home, the Earth plays host to many wayward lumps of rock looking for a gravitational well to hang around near. Astronomers have actually detected several other quasi-orbital satellites that belong to the Earth, all here for a little while before caroming on to pastures new.

So what can we learn about the solar system from this newly discovered Earth's second moon? Quite a lot. Like the many other asteroids and comets, Cruithne contains forensic evidence about how the planets were assembled. Its kooky orbit is an ideal testing ground for our understanding of how the solar system evolves under gravity.

As said before, it wasn’t until the end of the 20th century that we even realized that bodies would enter such weird horseshoe orbits and stay there for such a long time. The fact they do shows us that such interactions will have occurred while the solar system was forming. Because we think terrestrial planets grow via collisions of bodies of Cruithne-size and above, this is a big new variable.

One day, Cruithne could be a practice site for landing humans on asteroids, and perhaps even mining them for the rare-earth metals our new technologies desperately crave. Most importantly of all, Cruithne teaches us that the solar system isn’t eternal – and by extension, neither are we.

Duncan Forgan is a research fellow at the University of St Andrews. This article was originally published on The Conversation. Read the original article here.