The Chemistry Behind A Microbrew Hasn't Changed Much Over 6,000 Years

There’s a world of creativity to be had by changing up various stages of brewing beer and experimenting with the microbrew. 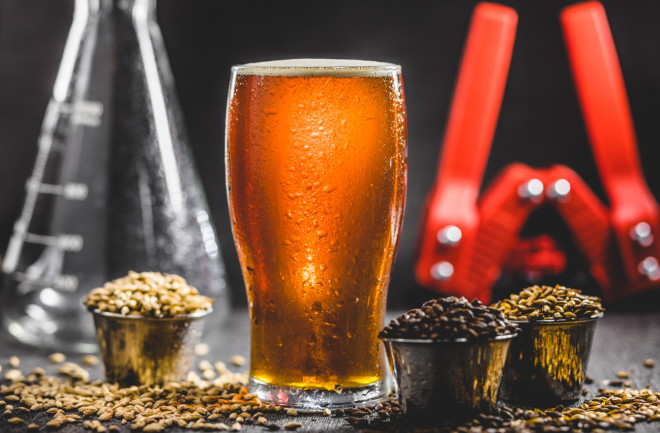 Humans have been brewing beer for more than 6,000 years. Some of the earliest known civilizations, including the Sumerians and the ancient Egyptians, brewed beer alongside each other. In the Middle Ages, monks famously honed the craft. And by the 11th century, hops had made its debut in Germany.

In recent decades, microbrewing has seen a revival as local and home brewers take matters into their own hands. But although the art of brewing beer is thousands of years old, the chemistry behind the process remains exactly the same.

The Chemistry Behind a Brew

Beer is nothing short of a chemistry experiment, says Bruce Carter, a professor of biochemistry at Vanderbilt University and a longtime home brewer. He explains that the process starts with the “malting” of a grass seed called barley. Malting (or steeping the barley in water for a few days) allows its embryos to start growing and produce enzymes called amylase, which help break down starch. During the fermentation process a little later on, barley will be the beer’s first sugar source.

The next phase, called “mashing,” involves adding heated water and letting the barley soak. “At this point, the amylase enzymes in the barley will chew up the starch and create a sugar solution,” says Carter. This solution is removed and referred to as “wort.”

But brewers might also add another source of sugar in addition to barley. “Huge beer companies like Budweiser, for example, will add rice because it’s a source of sugar that converts into alcohol that doesn’t have a whole lot of flavor,” says Carter, “which allows for consistency and wide drinkability.” Some of the flavor in beer comes from the sugars that aren’t easily broken down by enzymes.

Next, brewers typically add hops — the famous flowering plant that’s used to add bitterness to beer. Boiling the hops provokes the bitter flavor that beer drinkers love. Hops can also add flavor, thanks to the terpenes found in the oil glands of the plant, which evoke a citrusy aroma. “Beer flavor isn’t just about the flavor on your tongue, it’s an olfactory experience,” says Carter.

It’s All About Yeast

The addition of yeast decides what type of beer is ultimately created. In a very basic sense, there are two types of beer: ales and lagers, which traditionally come from two types of yeast. All ales are made with some offshoot of brewer’s yeast, while lagers use a different form of yeast called Saccharomyces pastorianus.

According to Jasper Akerboom, a microbiologist who owns a company that produces artisanal yeasts for beer production, the yeast is where much of the flavor in beer can be found. “Some yeasts leave more body behind than others. Some are fruity and others rustic,” he says.

Lagers, says Akerboom, use a variety of yeast that’s “cold-adapted.” It has a cooler, cleaner flavor that you might enjoy when sitting at the beach on a hot day. Ales, which include IPAs and stouts, for example, are a warm fermenting yeast, more closely related to the type of yeast found in wine. From there, if brewers desire an IPA, they would add more hops, for example. Or the beer might go through an additional filtration at this stage before it’s bottled and sent to a pub near you.

But this is just a basic outline of brewing, says Akerboom. There’s a world of creativity to be had just by changing up various stages of your chemistry experiment. And for home brewers like Carter and Akerboom, it’s also a labor of love: The two biologists love both science and beer, and have found a way to bring these worlds together while also enjoying a tasty microbrew.