The first private mission to search for life on another planet is due to head to Venus in May 2023. 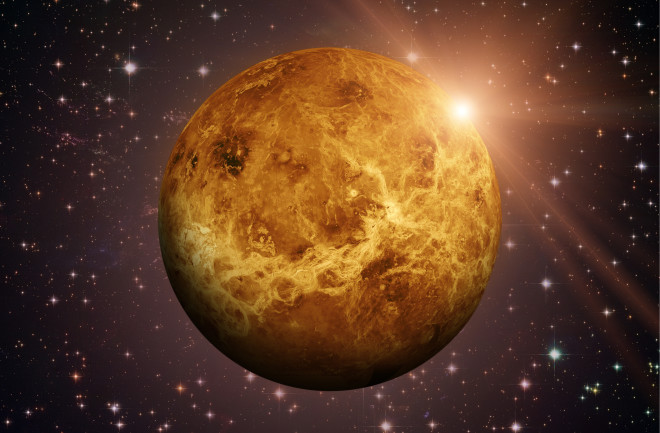 At first sight, Venus seems an unlikely candidate for life. The temperature at the surface is 475 degrees Centigrade, hot enough to melt lead. The pressure is 90 times higher than on Earth. And the atmosphere is filled with sulfuric acid. Earth-like, it ain’t.

An yet conditions in the atmosphere some 60 kilometers above ground are more hospitable. Here the temperature and pressure are much closer to Earth’s. Indeed, astronomers and space scientists have long gathered evidence that something strange is occurring in this region of the Venusian atmosphere.

This evidence consists of various chemical signatures that shouldn’t be there or are almost impossible to explain with conventional chemistry. The question this raises is whether these signals are evidence of Venusian life.

Now a privately funded mission to find the origin of these signatures is planned for launch in May 2023. The MIT-led team behind the plan—called the Venus Life Finder Mission--say their spacecraft will look for signs of life in the Venusian clouds.

Astronomers have long noted various strange phenomena in Venusian clouds. Almost 100 years ago, they noticed features in the atmosphere that appeared to absorb ultra-violet light. These features moved in synchrony with the rotation of Venus’s atmosphere.

Others have found similar evidence for this “anomalous UV absorber”, which captures light with a wavelength of between 320 and 400 nanometers and varies in in concentration and distribution over time. “The unknown absorber is remarkably efficient, capturing more than 50% of the solar energy reaching Venus, with consequent effects on atmospheric structure and dynamics,” say the team led by Sara Seager at MIT, who is the principal investigator.

But no known substance absorbs light in this way. Planetary scientists have investigated various candidates but have decided they are either too rare on Venus or do not have the same absorption characteristics.

Curiously, Earth has a similar anomalous absorbance called the “red edge”. This comes about because light reflected from the Earth’s surface tends to be absorbed strongly in the red part of the spectrum.

Scientists are well aware that this phenomenon is the result of photosynthesis on the surface. So the existence of a similar absorption anomaly on Venus raises the possibility that something chemically similar is happening there.

“The great efficiency of absorption, if utilized as a photosynthetic pigment, could provide a large amount of metabolic energy,” say Seager and co and go on to speculate further. “The spectral characteristics of the Venus clouds, including the strong UV absorption, are consistent with the spectrum of certain types of terrestrial bacteria.”

Another strange observation is that some Venusian clouds seem to be filled with large non-spherical drops called Mode 3 particles. “Non-spherical means the Mode 3 particles cannot be liquid droplets and are therefore not composed of purely concentrated liquid sulfuric acid,” say the researchers.

Various groups have speculated on why the particles are non-spherical. One possibility is that sulfuric acid drops can be neutralized to produce salt crystals that could distort their shape. Seager and co also point out that microbial cells would change the refractive index (and therefore the apparent shape) of these droplets.

Life also needs metals and other species of chemicals to act as catalysts in organic reactions. Curiously, the Venusian atmosphere contains a healthy sprinkling of these too, although the exact details and concentrations are still unknown.

One final line of evidence is in the unexpected presence of certain gases in amounts that are out of thermodynamic equilibrium. This is important because over Venus’s lifetime, most chemical reactions and cycles ought to have settled into equilibria.

For example, oxygen is highly reactive so any reserves left over from the early Solar System ought to have reacted to form oxygenated compounds by now. And methane is easily broken down by sunlight and so should have dissipated by now.

The Venusian atmosphere also contains oxygen and methane in amounts that cannot easily be explained. Astronomers also recently found evidence of unexpected amounts of phosphine. And the presence of ammonia in the atmosphere is important because it would neutralize sulfuric acid, making the clouds more amenable to Earth-like life.

None of this, of course, is proof of life on Venus. For that, much stronger evidence is needed, the kind that can only be gathered by a mission to study the Venusian atmosphere in situ. The Venus Life Finder Mission intends to do that with a series of three flights.

The first, due for launch in 2023, is a ballistic drop through the atmosphere and will use a laser to illuminate, excite and study organic molecules during the descent. But it will be a seat of the pants flight—the drop provides just a few minutes in which to study the atmosphere at temperate altitudes.

After that, the team plan to send a balloon that will spend a week or two floating through the atmosphere, perhaps gathering samples for on board study. The final part of the mission is far more ambitious—a sample return. That will involve another balloon, this time carrying a rocket with equipment that can gather samples, ascend into orbit and return to Earth.

The first mission is best defined. The vehicle will be based on a spacecraft platform that one of the partners in the project, a launch company called Rocket Lab, is currently building for NASA. It will carry a science payload of about 1 kilogram, in the form of a laser-based chemical analyzer called an Autofluorescing Nephelometer. It might also carry a camera to relay pictures of the descent before impact with the ground.

Rocket Lab will also launch the mission to Venus on an Electron launcher from the company’s facilities in either New Zealand or Wallops Island in West Virginia.

So far, Seager and colleagues give no word on costs, except to say that the mission is being funded by the current partners, which also include the Breakthrough Initiative, a privately funded program to look for evidence of life elsewhere in the universe.

Both NASA and ESA have announced their own missions to Venus for the end of the 2020s. The Venus Life Finding Mission is designed to complement these by being much more highly targeted. “A privately funded series of focused missions to Venus will take advantage of an opportunity for high-risk, high-reward science, which stands to possibly answer one of the greatest scientific mysteries of all,” say the team.

That’s interesting work that, succeed or fail, will focus the world’s attention on our nearest neighbor in a way that other Venus mission have failed to achieve.

25 January 2022 correction: this article was edited to remove a statement that the NASA and ESA missions to Venus will be orbiters and so unable to study the atmosphere directly. The NASA DAVINCI mission includes a probe that will enter and study the Venusian atmosphere.

What If Earth Hosted An Industrial Species Before Humans?