The queen's messages, once redacted by an unknown censor, shed light on her close relationship with a Swedish count during the French Revolution. 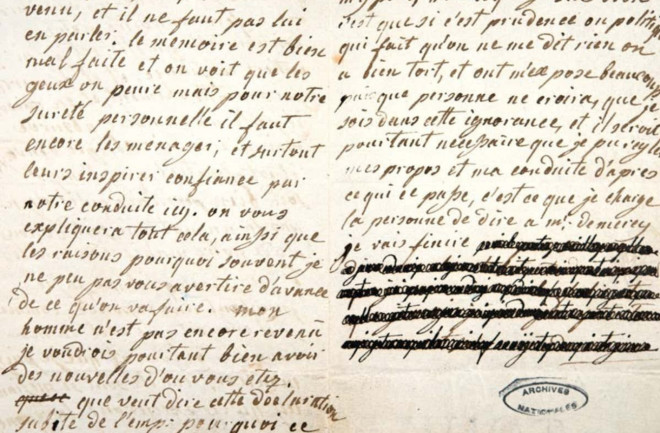 Researchers used x-ray fluorescence spectroscopy to reveal the scribbled-out passages of this 1792 letter from Marie-Antoinette. (Credit: Research Center for Conservation)

Even before losing their heads, the French Revolution was a big pain in the royal family’s collective necks. For one, as the country shifted toward a constitutional monarchy, Louis XVI was suddenly expected to govern in cooperation with a parliamentary body. But on top of that, the royals were also forced to move from the glittering Palace at Versailles to one that nobody liked — Tuileries Palace — in the center of Paris.

“​​Marie Antoinette hated all of this,” says Rebecca L. Spang, ​​a professor of history at Indiana University Bloomington and author of Stuff and Money in the Time of the French Revolution. For those who believed kings to be anointed by God, Spang adds, it was considered outrageous that a crowd of people could force the king to do anything. Marie Antoinette "sensed that their world was collapsing around them and that people who should be taking a strong position, like Louis XVI, were not.”

While she was kept under close surveillance after a botched escape attempt, the queen sought solace by exchanging secret letters with a close companion, the Swedish count Axel von Fersen, between the summers of 1791 and 1792. “Historians have known, really for more than 200 years, that he and Marie Antoinette were very, very, very close. And there's been speculation about just how close,” Spang says.

The French national archives purchased some of the exchanged letters from the Fersen family in 1982, but certain words and lines had been redacted by an unknown censor — presumed to be the count’s great-nephew — and continued to puzzle historians for decades. That is, until last month: A team of researchers led by Anne Michelin at the Research Center for Conservation in Paris released a study that unraveled a portion of this historical mystery with the help of X-ray fluorescence spectroscopy. Their technique revealed the redacted information contained in eight of the 15 letters.

This discovery, which was published in Science Advances, sheds light not only on the relationship between France’s last queen and her curiously close count, but also the identity of the redactor and the nuances of the era's aristocratic society.

A half-century ago, archaeologists turned to chemical analyses to reveal hidden, faded or degraded historical artifacts; but these methods held a higher risk of ruining the artifacts in question. More recently, portable instruments that instead rely on the interactions between light and matter within the electromagnetic spectrum offer a non-invasive alternative.

Think of an X-ray fluorescence (XRF) spectrometer as an extremely powerful flashlight that allows scientists to see the different elements within a given material. Each of these elements produces a characteristic set of fluorescent X-rays, sort of like a unique fingerprint, when struck by an X-ray of sufficient energy. Michelin and her colleagues used XRF spectroscopy and a host of data processing tools to map the ratio of certain elements (such as copper-to-iron or zinc-to-iron) within the inks used to write, and later redact, the letters.

The recovered redactions include emotionally charged language such as “beloved,” “tender friend,” “adore” and “madly.” Perhaps more importantly, the composition of the inks suggests that many of the letters are actually copies created by Fersen, likely for record-keeping purposes, and that his pen is also responsible for the plentiful redactions throughout these copies.

“To read under the censorship does not make it possible to know the truth about the nature of their feelings as the interpretation of texts is always questionable,” the study's authors write. “But for the historian, this correspondence remains a precious testimony of a troubled time and of the way in which the tragic political events influence the transformation of the emotions.”

Indeed, it remains unclear why Fersen chose to obscure certain passages rather than leaving them be or even destroying the letters entirely; scientists and historians alike have their suspicions, however. The French people held great resentment toward Marie Antoinette because she was Austrian, says Spang, who was not involved in the study. For centuries, France and Austria engaged one another as bitter enemies — much like the U.S. and USSR during the Cold War.

While the letters aren’t definitive proof that the relationship between Marie Antoinette and Fersen was one of a sexual nature, they do divulge plenty about the attitudes pervading French society at the time. Although we imagine the epitome of aristocratic manhood to be a bunch of dandies wearing lace, bright colors and embroidery on their waistcoats, says Spang, there was also a culture of "so-called chivalry" within the European nobility. This is evident in Fersen's decisions.

The letters also “give us a little bit more of an insight into the sorts of things that people in the 18th century thought needed to be kept secret, that we might not feel the same way about today,” Spang says. It’s not likely to make anyone blush if you tell a close friend that you “adore” them nowadays. “But those sorts of statements about who you are, in your own handwriting, were really thought to be quite revelatory in the 18th century — in a way that perhaps today we wouldn't imagine them.”

Moving forward, the techniques utilized by Michelin and her colleagues offer a wealth of possibilities in studying both past events and modern crimes. “Beyond the specific case of [Marie Antoinette] and [Fersen’s] correspondence,” write the researchers, “the development of methodological tools to address this type of unredaction challenge is of great importance for historical and forensic sciences.” Spang adds that we know of plenty of obscured writings from the 18th century, including diplomatic and trade secrets that were the result of industrial-era espionage, that await greater scrutiny.

As for the seven of Marie Antoinette and Fersen’s letters that remain, the inks used to write and redact the letters are utterly indistinguishable — even by XRF spectroscopy. It seems that the last queen of France gets to retain some of her mysteries, for now.