Scientist You Should Know: Monika Schleier-Smith and the Quantum Universe

Physicist Monika Schleier-Smith customizes quantum networks in the lab. Her experiments advance quantum computing and improve our understanding of the universe. 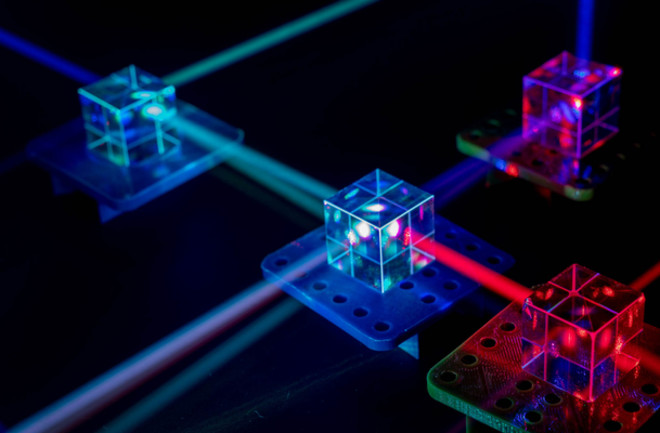 In Ant-man and the Wasp, when Ant-man shrinks to a subatomic size, Janet Van Dyne begins to plant messages in his head from afar. Quantum entanglement inspired this plotline, according to an interview with NBC – a phenomenon where two tiny particles share information over great distances.

Monika Schleier-Smith, an experimental physicist and associate professor at Stanford University, entangles atoms in her lab to ask big questions like: How does gravity work, what happens to information when it falls into black holes and what problems can quantum computing help us solve?

Quantum physicists study how atom-sized particles interact. At this size-scale, the classical rules of physics fail, and counterintuitive phenomenon like quantum entanglement arise.

That’s quantum entanglement — correlation in the randomness. Atoms can store information about magnetic spins, and although any atom’s spin seems random, they can synchronize their spins with others in their network.

Storing information in correlations makes quantum systems complex, but also powerful. “If I have just some tens of quantum bits, I can't describe that system on any classical computer. That to me is fascinating, because there's some sort of power in quantum systems that classical ones don't have,” Schleier-Smith says.

Controlling entanglement networks broadens its applications. Some atoms only interact with the ones surrounding them. Schleier-Smith advances the field by controlling which atoms interact, and building systems where atoms can entangle from a distance.

She compares this to the internet. “In the past, you mostly talked to your next-door neighbors, or people who you just bumped into in the real world. But these days, we're always getting on Zoom calls,” says Schleier-Smith in a Zoom interview. “We can connect, in this case, across continents just by dialing in. This changes the way that information can travel. We’re doing that for quantum systems in the lab.”

In Schleier-Smith’s lab, she cools atoms to nearly absolute zero. After lulling them into a standstill, the atoms exchange photons to communicate their magnetic states with each other.

The atoms are like bar magnets. An atom can have a north direction that points up or down. Any given atom’s magnetic state is random, but Schleier-Smith can shine a highly tunable laser onto them and create correlations in the randomness.

The laser causes atoms to shoot off photon messengers. When the photon collides with another atom, the signaler and recipient atoms entangle in opposite magnetic states. One atom’s magnet points up, while the other points down. By tuning the laser’s intensity and wavelength, Schleier-Smith can control which atoms entangle and which ones don’t.

The ability to customize entangled networks in the lab is revolutionary. It allows Schleier-Smith to simulate mathematical theories that have previously been impossible to test. For example, her ongoing experiments test a new theory of quantum gravity – an experiment that could reconcile Einstein’s theory of general relativity with quantum mechanics.

Before tunable quantum systems, there was no easy way to test quantum gravity theory. “You somehow need a system that’s massive so that gravity matters, but also microscopic so that it is governed by quantum mechanics,” Schleier-Smith says. “Theory is kind of dreaming of things that seem way ahead of experiments.”

By carefully controlling entangled atoms in the lab, Schleier-Smith can test if something resembling gravity arises. “Through simulations, we can build systems in the lab that connect to the theoretical ideas,” she says.

Schleier-Smith’s ultimate goal is to improve our fundamental understanding of quantum mechanics and entanglement. She hopes that her findings will produce practical benefits, but also yield a better understanding of our universe.

“Part of the hope is that we will be surprised by new discoveries in the lab, and perhaps also find new applications for quantum systems that we hadn’t yet dreamed of.”