Many of Ukraine’s cherished cultural sites and artifacts are already lost. 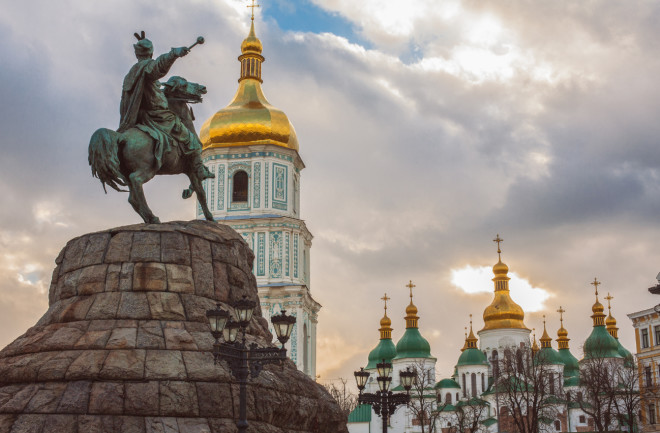 The Saint Sophia Cathedral in Kiev, as viewed from Sophia square. (Credit: finwal89/Shutterstock)

Russian forces in Ukraine have killed hundreds of civilians and spurred another nearly 3 million to flee the country, but in the midst of this humanitarian crisis something else is at stake: a splendid history that, though perhaps little-known to foreigners, captures centuries of Ukrainian culture.

In the weeks since the invasion began on Feb. 24, the Russian army has destroyed precious works of art and architecture and continues to threaten a great deal more. The war has prompted increasingly dire alarms from the United Nations Educational, Scientific and Cultural Organization, which includes seven Ukrainian sites on its World Heritage List and is “gravely concerned” by the damage the nation’s culture has so far suffered.

Human welfare, of course, takes precedence. But culture is key to upholding a sense of historical and national identity, and cultural defenders fear the long-term consequences of its absence if the conflict continues.

Widespread shelling in Kharkiv — Ukraine’s second largest city — has battered Freedom Square, striking near the Derzhprom, a Stalin-era constructivist building also known as the “Palace of Industry.” When erected in 1928, it was Europe's tallest skyscraper.

The situation is similar in Chernihiv, whose historic center is strewn with churches dating as far back as the 11th century. (Both cities are candidates for World Heritage status.) Bombs have also struck the Babyn Yar Holocaust Memorial Center, where Nazi soldiers massacred more than 33,000 Jews over the course of two days during World War II.

In Kyiv, Ukraine’s capital, some of the country’s greatest symbols remain vulnerable. Earlier this month, the Ukrainian Council of Churches and Religious Organizations said it feared an aerial strike on the thousand-year-old Saint Sophia Cathedral — a magnificent Byzantine structure with 13 green and gold cupolas that is perhaps Ukraine’s most famous monument. The cathedral is also a World Heritage site, lumped together on the list with a second religious complex, the Monastery of the Caves, which is just as old and gets its name from the austere monks' cells tunneled into the nearby rock.

“Countless historical and architectural monuments and archaeological sites are under threat of artillery shelling and uncontrolled movement of heavy military trucks,” wrote Vlada Litovchenko, director of the Vyshhorod Historical and Cultural Reserve near Kyiv, in a Facebook post translated into English.

Cultural professionals distinguish between the movable and the immovable. Buildings obviously fall into the latter category, but museum collections face similar hazards. Though most of their contents can be carried off to safer storage facilities, the evacuation of thousands of items is a logistical nightmare.

Just 50 miles northwest of Kyiv, at a museum in the town of Ivankiv, some 25 paintings by celebrated folk artist Maria Primachenko were burned, according to the country’s Ministry of Foreign Affairs on Twitter. Pablo Picasso once said of her, "I bow down before the artistic miracle of this brilliant Ukrainian."

To avoid further destruction, UNESCO has ramped up protections for endangered monuments and museums; the organization is monitoring harm already done via satellite imagery and marking heritage sites with the “Blue Shield” emblem as a signal to attackers. In theory, this will prevent deliberate or accidental damage to them.

That protocol derives from the 1954 Hague Convention, during which most of the world’s nations — including the Soviet Union — agreed to protect cultural heritage even in times of war. Russia, as the successor state to the Soviet Union, has also been bound by the treaty since the country’s inception in 1991. Cultural organizations have urged Russia to remember its obligation, as a party to the convention, under international law.

In truth, however, the invasion has only intensified an ongoing process of cultural usurpation.

In September of last year, UNESCO released a report concluding that, since Russia’s occupation of the Crimean Peninsula in 2014, the country had subjected the region’s heritage to “barbaric treatment and robbery” — stealing cultural property from museums, for example, and performing illegal archaeological excavations. “A large number of valuable objects of national significance have been suffering serious, sometimes irreparable losses,” the report states.

But the damage to date is a mere fraction of the worst-case scenario, as invaders surround other important cultural areas. On Sunday, missiles hit a military base in western Ukraine near Lviv, whose entire historic center is a World Heritage site. Residents are also braced for assault in the Black Sea port city of Odessa, a cultural hub whose neighboring towns have been captured in recent days.

Back in Kyiv, bombardment could still obliterate some of the nation’s most prized artifacts. The Museum of Historical Treasures of Ukraine, for example, holds an invaluable collection of Scythian gold, including the dazzling Golden Pectoral — a finely wrought breastplate, arrayed with ornate animal figures, dating to the 4th century B.C.

When the violence is over, advocates say, culture will be the glue of society. It may even help to eventually restore harmony between nations, according to UNESCO director-general Audrey Azoulay in a recent press release. “We must safeguard the cultural heritage in Ukraine as a testimony of the past," she said, "but also as a catalyst for peace and cohesion for the future, which the international community has a duty to protect and preserve.”