Physicists Detect the "Spooky Popcorn of the Universe"

For the first time, physicists measured fluctuations in the quantum realm. 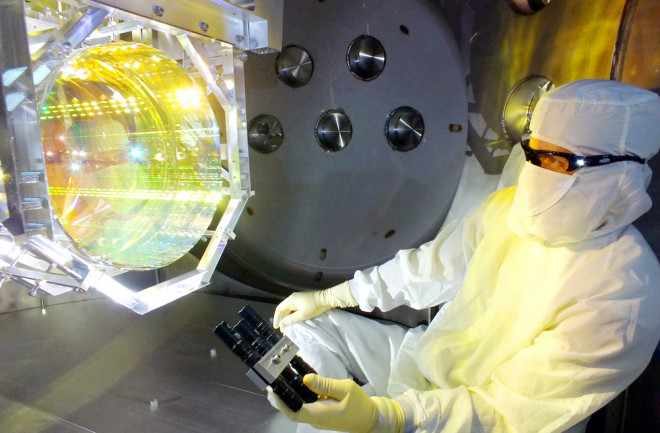 Each of Advanced LIGO’s two detectors has a super-still 90-pound mirror at the end of a 2.5-mile-long tunnel. Here, a LIGO optics technician checks one of the mirrors.

This article appeared in Discover’s annual state of science issue as “Big Excitement Over Tiny Fluctuations.” Support our science journalism by becoming a subscriber.

The Advanced Laser Interferometer Gravitational wave Observatory (LIGO) can measure giant ripples in space-time that race across the cosmos. But in 2019, physicists used it for something else: to measure fluctuations at the quantum scale that jiggle the detector’s super-sensitive mirrors. They published their report in Nature in July.

Theorists have long predicted this behavior at the interface of light and matter, but this study is the “first to experimentally prove it” at such large scales and at room temperature, says physicist Haocun Yu of the MIT Kavli Institute, who worked on the project. It’s also the first time that scientists have quantified these quantum effects. These measurements, they say, will improve gravitational wave detectors and other instruments that are influenced by quantum noise.

According to quantum mechanics, the subatomic realm is replete with particles popping in and out of existence, a phenomenon that gives rise to these fluctuations. Physicist and MIT School of Science Dean Nergis Mavalvala, who also worked on the new experiment, calls these fluctuations the “spooky popcorn of the universe.” (Spooky harks back to Albert Einstein, who once called quantum entanglement “spooky action at a distance.”) Because this “popcorn” is everywhere, it can affect the measurements needed to find big things like gravitational waves.

Mavalvala’s group set out to measure and control these quantum effects as a way to improve gravitational-wave detection. Advanced LIGO, housed in tunnels in Louisiana and Washington state, works by measuring how long it takes lasers to travel to a distant mirror. Gravitational waves — from neutron star collisions, or when black holes devour ordinary stars — can change the speed of the lasers’ trip.

LIGO, which began observing in 2007, was upgraded to Advanced LIGO in 2015 and almost immediately thereafter found its first gravitational waves. But Advanced LIGO is so sensitive that its measurements can be clouded by quantum fluctuations. So by controlling these ultra-subtle movements, Yu says, scientists can eliminate more of this noise and detect gravitational waves better.

The MIT group used a tool called quantum “squeezers” to reduce the noise. Using the squeezers — in the absence of a gravitational wave — the physicists reported that they were able to measure quantum fluctuations to remarkable precision: The mirror only moved by about 10^-20 meters, which is close to 1/100,000th the diameter of a proton. That matches theoretical predictions, but is the first measurement of its kind.