NASA Is Testing A New Way To Crash Land On Mars

Engineers have safely landed spacecraft on Mars nine times. But now they're investigating whether crash landing is the best way to reach the Red Planet. 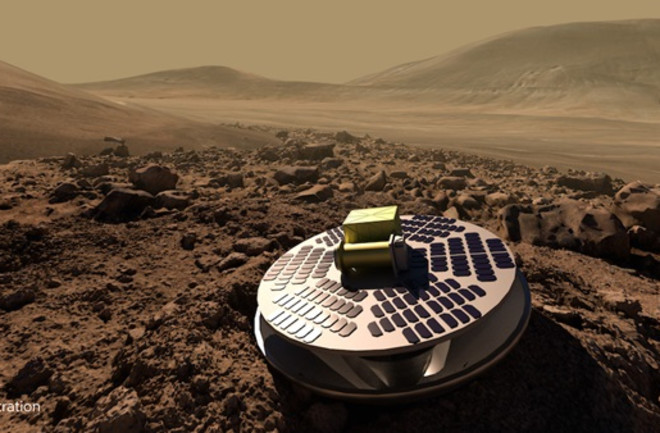 SHIELD, seen here in this artist's concept, is a potential alternative approach to the costly entry, descent, and landing strategies currently use by NASA to get spacecraft safely to the surface of Mars. (Credit: California Academy of Sciences)

NASA has always taken great care when it comes to touching down on Mars, relying on parachutes, airbags, and even jetpacks to ensure their spacecraft safely reach the surface. This method has worked for them nine times in the past. But now, an experimental lander is looking to try a more hard-hitting approach.

Instead of slowing the craft’s descent, SHIELD — which stands for Simplified High Impact Energy Landing Device — would act like the crumple zone of a car, absorbing much of the energy of a hard impact. This method would work thanks to SHIELD's accordion-like, collapsible base.

SHIELD, seen here, would use a collapsible base to absorb most of the energy of a hard impact. (Credit: NASA/JPL-Caltech)

If it Works For Earth…Why Not Mars?

The concept for SHIELD originated during planning for NASA’s Mars Sample Return campaign. Since the Perseverance rover landed on Mars in February 2021, it has been busy collecting rock samples in metal tubes, storing them in its belly for now.

Once the team decides exactly where and when the samples will be picked up for return to Earth, Perseverance will deposit its stomach contents at designated sample cache depots. From there, a Sample Retrieval Lander would pick them up, and the Mars Ascent Vehicle — the first rocket ever to launch of the surface of Mars — would transport them to orbit around Mars. Finally, the Earth Return Orbiter would snag the sample container from Mars orbit and venture back home, where NASA plans to safely crash land the sample container in a deserted location.

Preparing for the final step in this process made engineers wonder: If such a hard landing could work on Earth, could it work on Mars as well?

To test the idea, the team placed a smart phone, radio, and accelerometer in their prototype SHIELD and hoisted it some 90 feet (27 meters) to the top of a drop tower at the Jet Propulsion Laboratory. Using a bow launch system — essentially a giant sling — they then hurled the prototype and its contents at a steel plate at roughly 110 mph (177 km/h). That’s around the speed at which a lander would slam into the martian surface after being slowed by Mars' tenuous atmosphere.

Following the mock crash landing, all the electronic devices inside SHIELD were left largely unscathed, with only some superfluous plastic components damaged. And while SHIELD did flip after its initial impact, the team suspects this was due to the metal sheet it struck rather than the lander's design.

It was a promising first step, leaving the engineers pondering what else might be possible. “We think we could go to more treacherous areas, where we wouldn’t want to risk trying to place a billion-dollar rover with our current landing systems,” said Lou Giersch, SHIELD’s project manager, in a JPL press release.

The Ground’s the Limit

Currently, NASA has a limited number of safe martian landing zones identified and available for use. After all, they don’t want to build a billion-dollar rover and send it to Mars, only for it to fail its landing due to avoidable treacherous terrain.

But without the need for the harrowing (and costly) entry, descent, and landing process currently used, SHIELD would open new areas of Mars to explore. Not to mention, “if we can do a hard landing on Mars,” said Velibor Ćormarković, SHIELD team member, “we know SHIELD could work on planets or moons with denser atmospheres.”

But that’s a while down the road. For now, the team’s next step is to design the rest of the lander in 2023.