Was this hand grenade used during the Crusades? If so, it’s merely the latest in a long line of medieval incendiary devices. 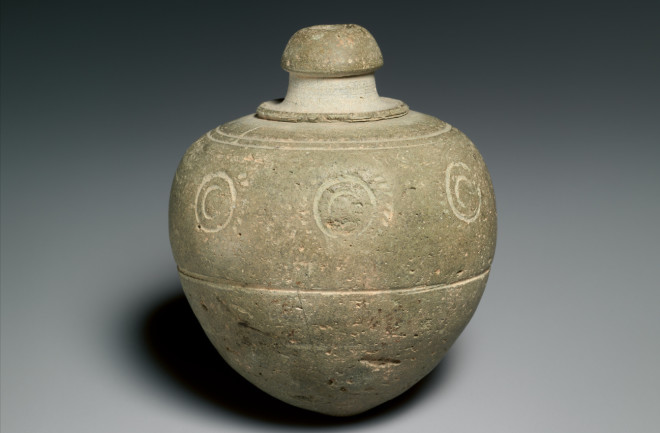 Anthropologists have excavated sphero-conical vessels throughout the Middle East and Central Asia for decades. Yet the purposes of these receptacles, which often come equipped with cone-like bases and tiny openings to prevent spills, are still unclear; hypotheses range from beer gourds to smoking pipes.

A recent analysis of four such vessels — found in the Old City of Jerusalem during the 1960s and which date back to the 11th or 12th century — points toward a different theory. According to a team of researchers led by molecular anthropologist Carney Matheson, three of these ceramic pots likely contained oils, perfume and medicines, which matches up with previous expectations of such vessels. But the fourth, they say, may have been used as a medieval hand grenade during the Crusades.

Inside its ultra-thick and utterly undecorated walls, the anthropologists found sulfur residue along with mercury and magnesium (consistent with explosives). Their findings were published in PLOS ONE earlier this year.

Matheson, now an associate professor at Griffith University in Australia, says the hand grenade theory is supported by both Arab and Crusader texts. Specifically, he and his colleagues note historical accounts of the siege of Jerusalem in A.D. 1187, which mention bright flashes and big bangs that could be consistent with flash grenades.

“More research on these vessels and their explosive content will allow us to understand ancient explosive technology of the medieval period, and the history of explosive weapons in the Eastern Mediterranean,” Matheson said in a press release.

Scientists and historians alike have long sought to understand how war was waged thousands of years ago. The earliest known incendiary weapons date all the way back to the seventh century. Beginning around this time, the Byzantine Greeks famously used a fluid known as “Greek fire” to engage in combat on the high seas.

The exact components behind Greek fire were a well-kept military secret and remain a mystery to this day, but petroleum was likely the main ingredient. Other potential elements include sulfur or pitch, saltpeter (namely potassium nitrate, a salt that forms on the surfaces of rock), and turpentine, which is an oily extract obtained from coniferous trees.

How the flammable mixture was ignited is another mystery, though it’s possible Byzantine fighters used a compound called quicklime, or calcium oxide. They threw the flammable mixture in pots or ejected it from tubes that were mounted to the bow of a boat and reminiscent of medieval flamethrowers. Supposedly, Greek fire could not be extinguished by water — only with sand or vinegar, making it particularly devastating in naval warfare.

It’s been cited as a prime reason for the long reign of the Byzantine Empire, which lasted some thousand years after the western half of the Roman Empire crumbled. To be sure, the technology helped the Byzantines defend Constantinople from the Arab sieges of A.D. 673 and 717, and again against Russian forces in the 10th century.

To the East, Chinese monks discovered “black powder,” the precursor to modern-day gunpowder, in the ninth century during their quest for the elixir of immortality. Its key ingredient, saltpeter, had been used for centuries in medicine there; but somewhat surprisingly, it turned into an incendiary weapon when mixed with sulfur and charcoal.

At the time of its inception, the monks believed the most effective chemical formula to be one part sulfur, three parts charcoal and nine parts saltpeter. In the 18th century, however, researchers concocted an even more effective ratio (10:15:75), which many gunpowder manufacturers continue to use to this day.

During the Song Dynasty, the Chinese used black powder extremely effectively in siege warfare, particularly against the Mongols. This led to the development of rudimentary rockets, bombs, cannons and mines. Most researchers agree that another result of these international conflicts was the introduction of black powder to the Middle East by the 13th century — though others argue that the technology arrived in the region even earlier and was merely kept a military secret.

Adding their two cents to the ongoing debate, Matheson and his team say their latest study of sphero-conical vessels from medieval Jerusalem — one of which contained sulfur but not saltpeter — definitively proves the pot did not contain black powder. Instead, the presumed explosive was likely developed by locals from the immediate region. It remains to be seen whether other such vessels will tell the same story.